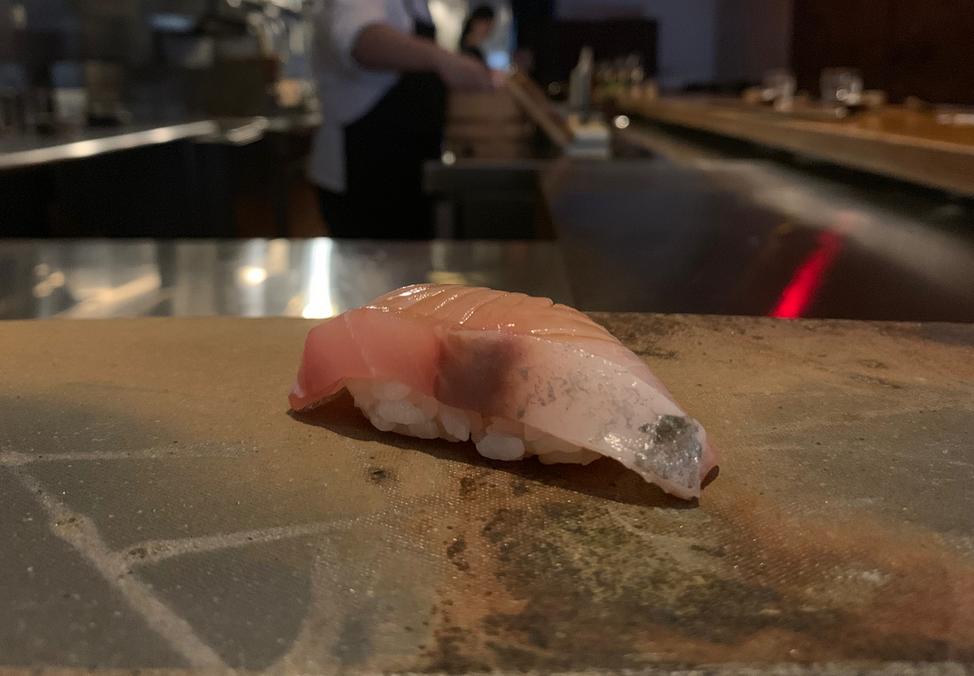 ​
As Zheng gleefully shares, him and his team (aka his wife), will consistently re-evaluate and tweak the menu depending on the time of year, incorporating in-season flavors and keeping courses that work. It's why Shima Aji is on the menu now, and ​Kanpachi (Amberjack, pictured below), which is marinated in a Kumquat compote, remains on the menu from the spring season. That level of care - to avoid the complacency that sometimes seeps into a restaurant - is part of the heart and soul that I waxed about earlier. 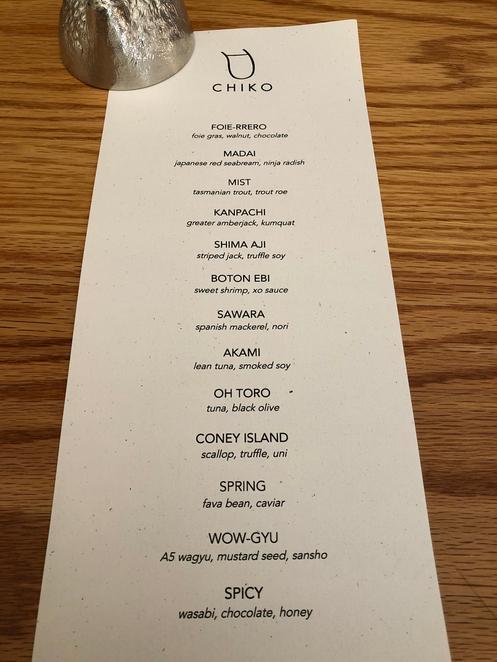 The Itamae (chef equivalent) at Chiko is Xiaowei Zheng, a youthful 11-year veteran of the New York City restaurant scene. Though you may not be familiar with Zheng, you likely know some of his previous haunts, Sushi Dojo ​and Il Buco Alimentari. At Chiko, Zheng draws influence from both, as well as his experience with French and Chinese cuisine, to populate his 13 course (including dessert) Omakase menu.  At $158, it's firmly in the ballpark for finer Japanese restaurants in New York City, though it might be an adjustment for those used to eating sushi at the more casual spots in Brooklyn's Greenpoint neighborhood.

Regardless of your predilection, the effectiveness of each Omakase course shines through. Zheng ages most of his fish in some fashion, and 90% of the ingredients come from Japan. Critically, he cleverly blends that approach with touches from other cuisines to build the menu. It's called an Omakase, but for what's worth, the focus on seasonality and the delivery of the non-nigiri courses may feel more Kaiseki-style to those familiar with the tea ceremony meal.

A FAMILY AFFAIR WITH GREAT SERVICE

​​That dish, appropriately called "Mist", is served early on. "Wow-Gyu" on the other hand, which in a shocking twist of events features Wagyu beef, comes towards the end, accompanied by mustard seeds. It's cooked on a stone grill by Zheng himself, and is served at the end for reasons both practical (it takes a while to cook) and traditional (meat is usually the finale in many cuisines).

I touched on this earlier, but meals at Chiko are about more than the nigiri. At least 5 of the 13 courses venture beyond that, and maybe more, depending on what you consider the 13th course: wasabi ice-cream that looked suspiciously like a ball of shari (rice). But don't focus there; instead, watch Zheng, as he steams Tasmanian Trout - both the meat and roe - in a glass cylinder that's straight from 1991's best movie, Beauty and the Beast. He lets the fish sit just long enough to gather steam, and then delicately layers it on top of a butter sauce. Word to the wise: don't let that nectar go to waste. I looked exactly like a cat licking up milk. 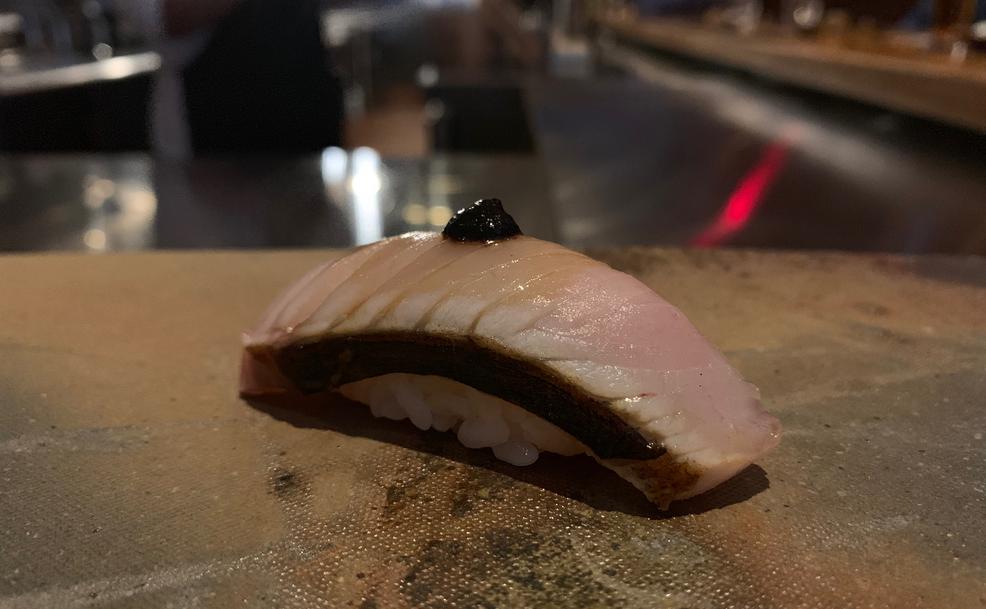 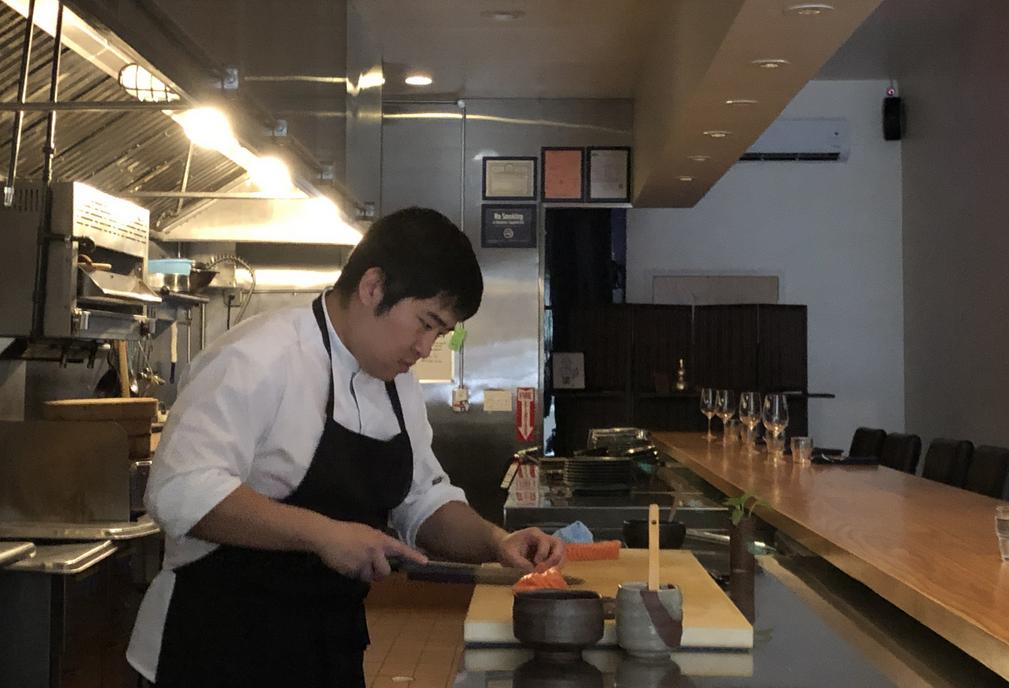 In what's become a welcome pattern in a city filled with soulless, corporate chains, Chiko is yet another New York City sushiya​ that feels like your family's dining room. No surprise, since the only two people working are Zheng and his wife, who runs the front of the house, takes the orders, and spends most of the meal schmoozing with the guests. That leaves Zheng to do what he does very well: prepare and present traditional Japanese food with a modern slant and creative twist.  Zheng's experimentation reminded me of Restaurant Ato, a gone-but-not-forgotten pioneer of real sushi fusion in New York City. It's worth a visit.

I n the annals of empty phrasing, "heart and soul" is surely up there among the emptiest. In sports, it generally refers to a player that has no overt characteristics or skills. In business, it's probably the longest tenured member of middle management. And sure, like everything,  there's some wiggle room. But really, the basic point remains: most of the time, it doesn't mean much. Except however, in the world of restaurants, where that phrase seemingly means something.

What that something is, I'm not sure. Perhaps it's a team that are passionate about their craft and its success. Or maybe it's an operator who embraces the symbiotic relationship between a restaurant and its community. Or staff whose decisions embody the perspective of their customers. Regardless of the meaning (and that word salad I just threw up), if you understand one thing, it should be this: Chiko​, a 10 seat sushiya based in Greenpoint and run by a husband and wife, has heart and soul (and a creative omakase as well). ​ 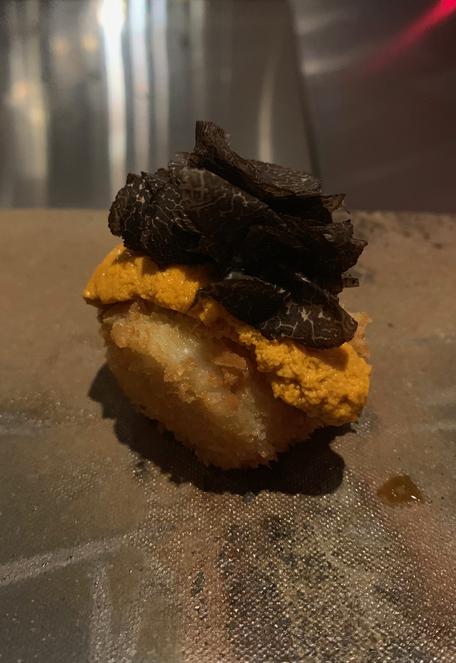 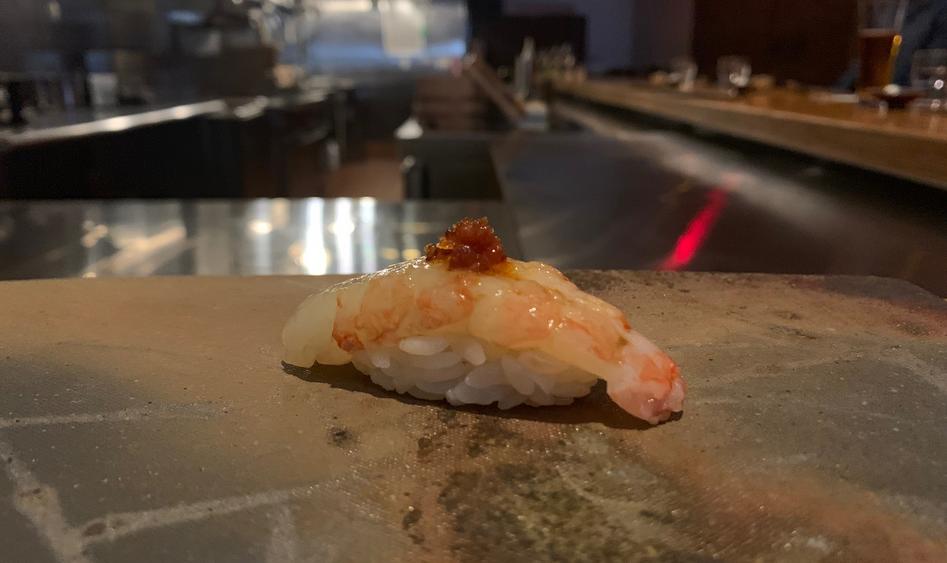 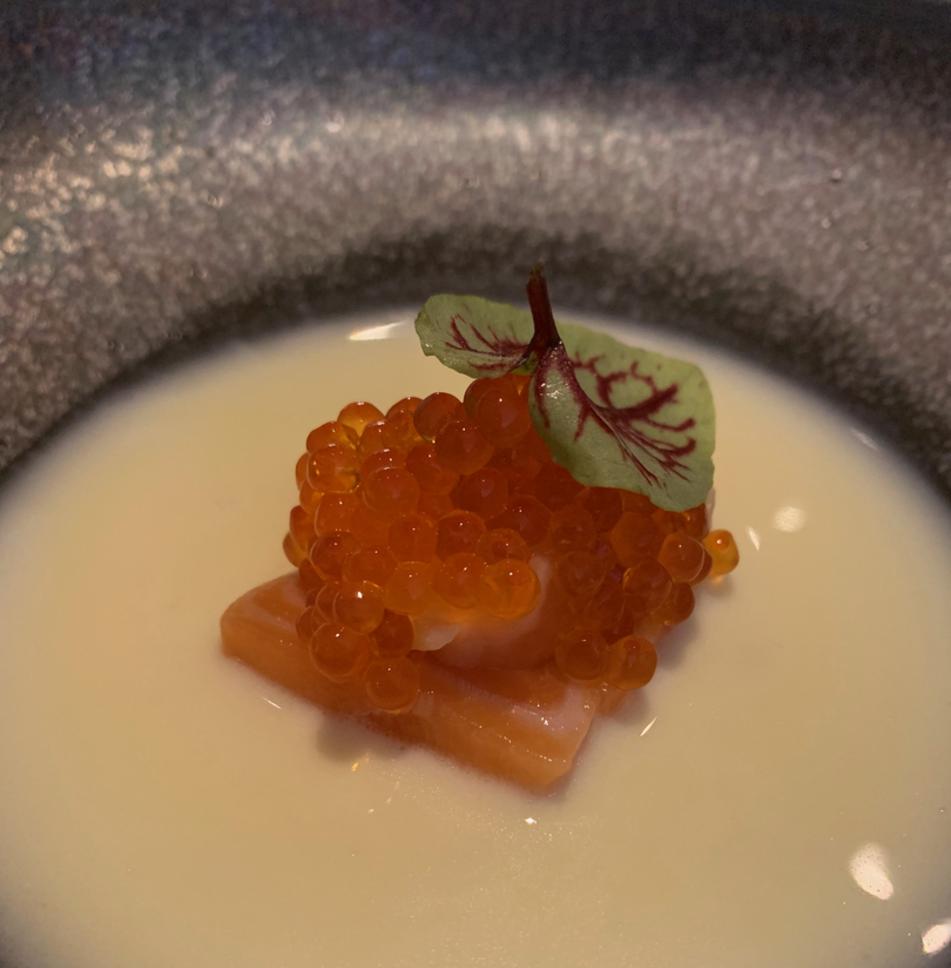 LET's TALK ABOUT THE NON-SUSHI

At the risk of spending a paragraph on each course, humour me while I touch on one more: the "Coney Island", which unless you've been living under an Instagram rock (follow @thesushilegend), is Chiko's most recognizable item. Hotate (Scallop) topped with black truffle and Uni (Sea Urchin). Frequent readers will know that I loathe the recent spate of throwing Uni and truffle onto every type of Neta​. But Hotate, like Ika (Squid), has a more muted taste and benefits from a stronger pairing (like Kosaka​ does). The rest of the menu is in the menu below and to the right. 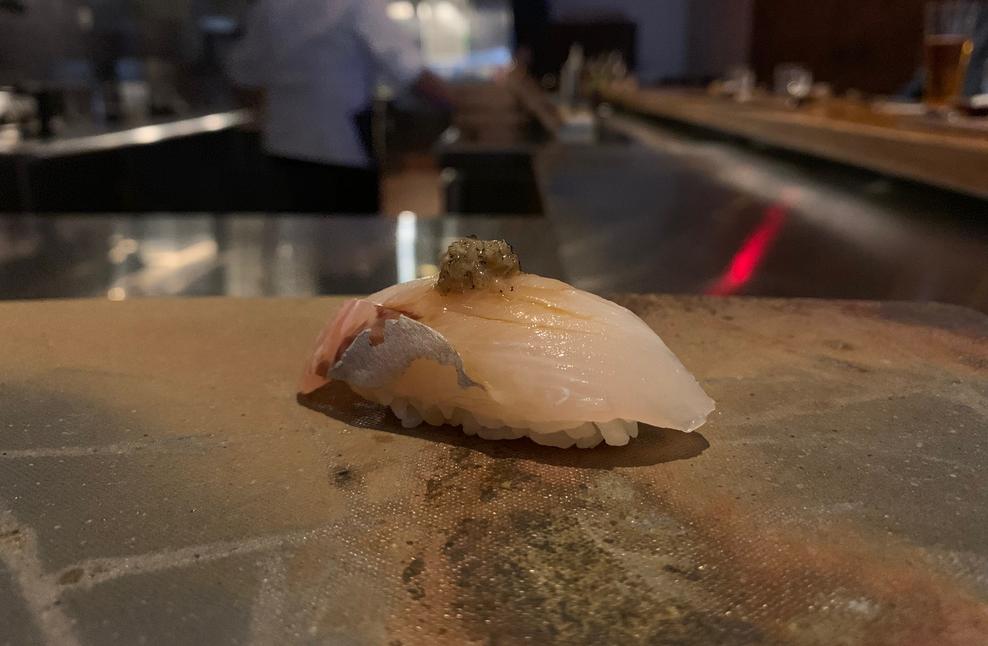 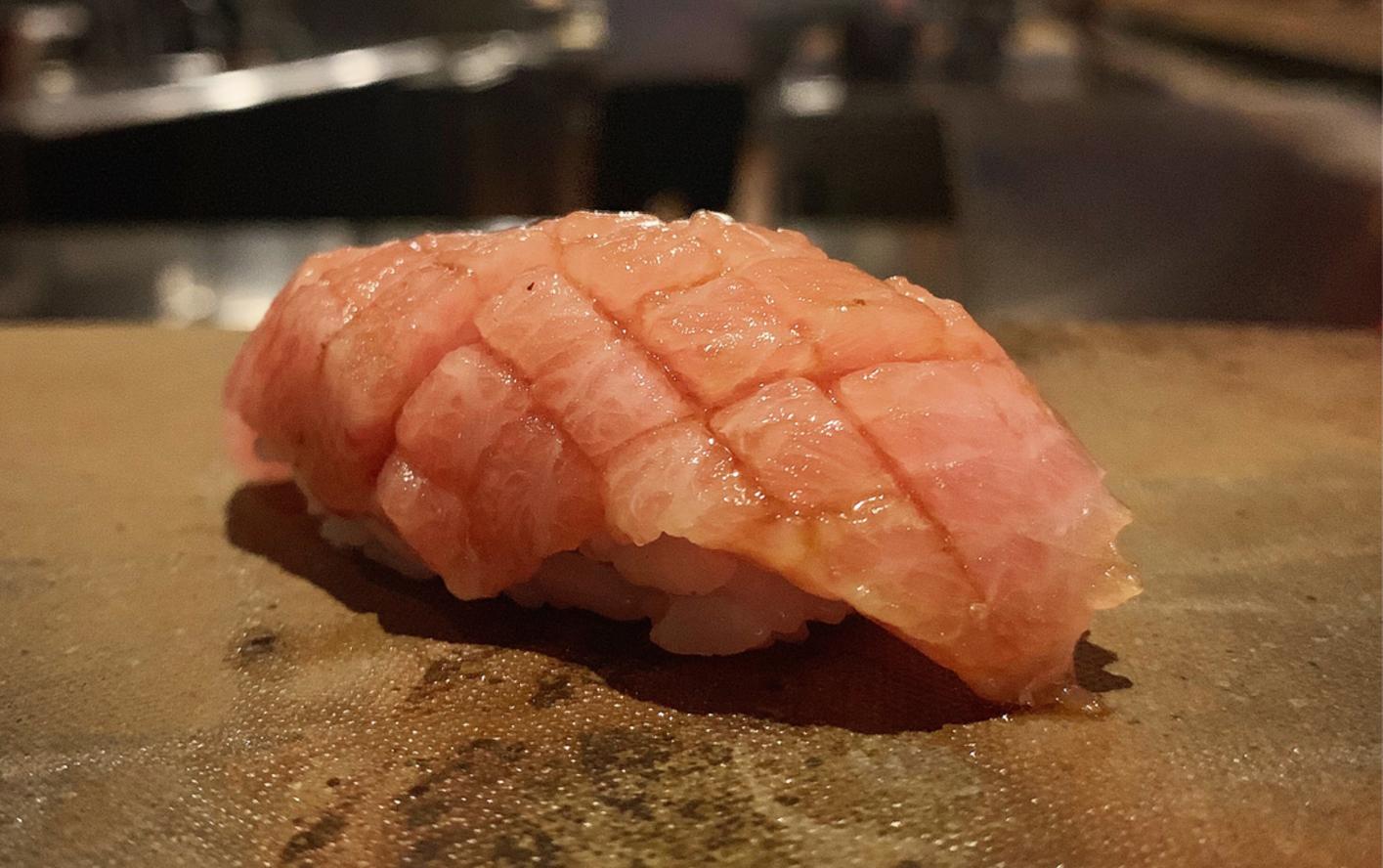 ​
Chiko's nigiri courses also feature some familiar, year-round classics, with his personal twist. For example, O Toro (strong tuna belly, pictured in the header), has been renamed Oh Toro​ on the menu, and is layered with black olive sauce, a nod to Zheng's Italian experience. Botan Ebi (sweet shrimp, pictured below), touches his Chinese roots with XO Sauce, and isn't something that I, you or anyone would actually expect a decent taste from. Well, kiddos, it works. 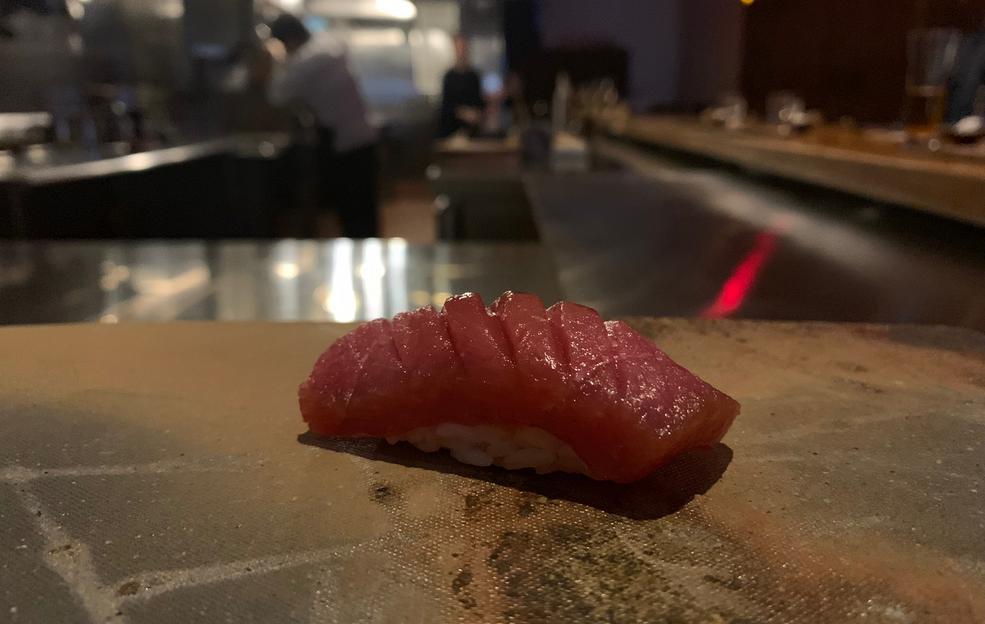 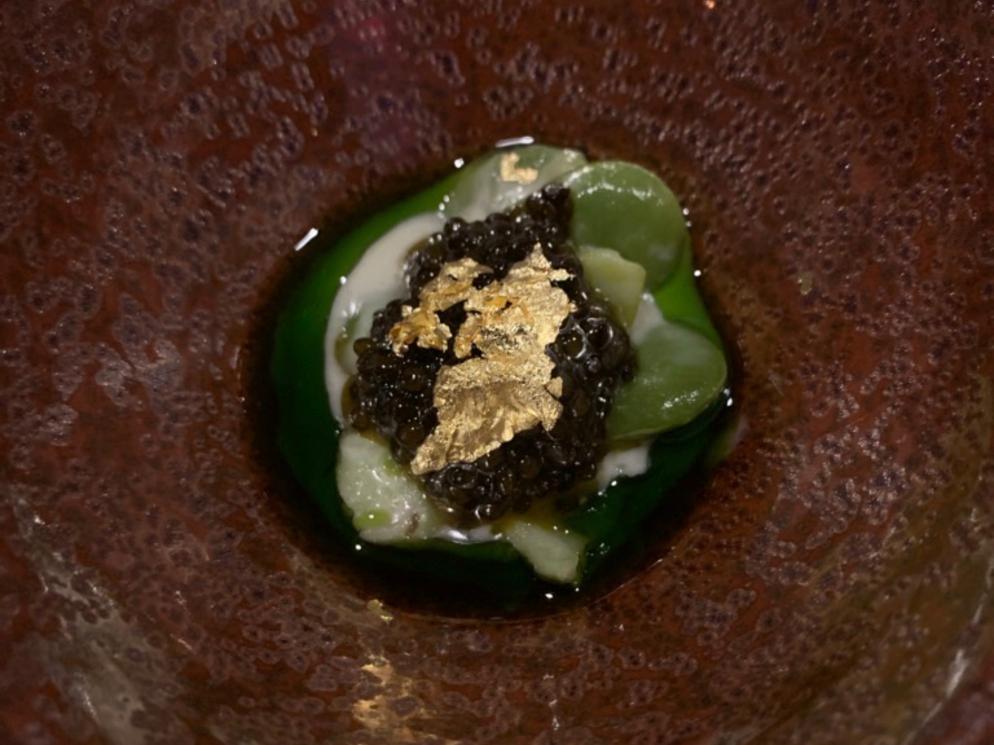 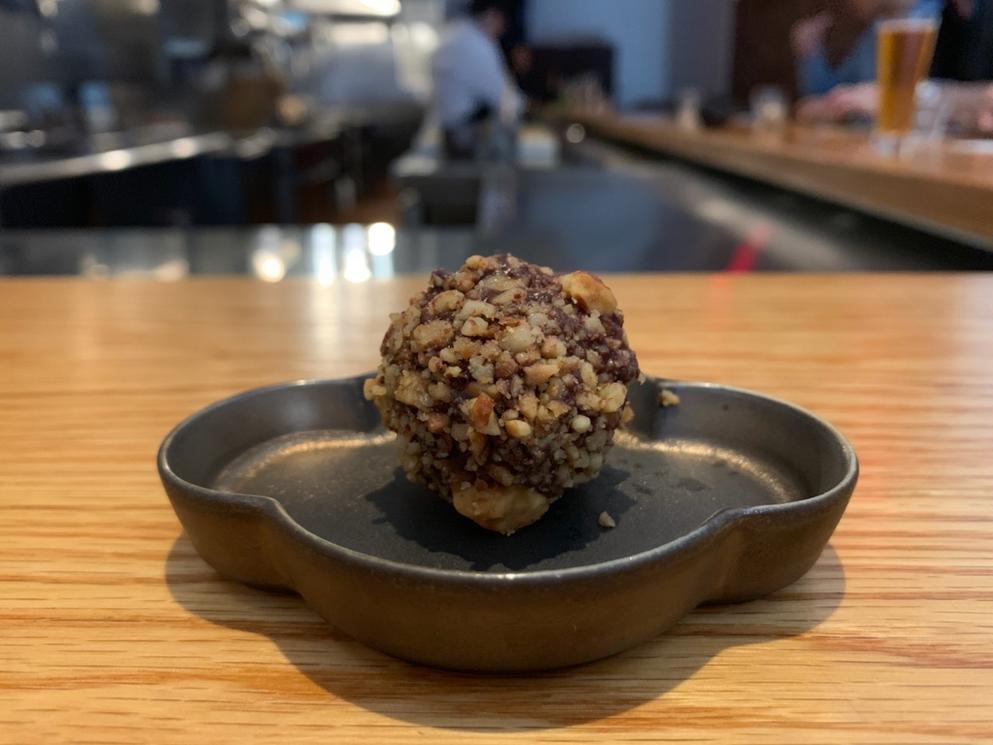 Zheng ages most of his fish, including the fifth course, Shima Aji (striped jack, pictured below) which checks in at 20 days. He also gets creative with the accompaniments; rather than a traditional shoyu (soy sauce), ​Zheng blends in truffle oil to give his soy sauce a more pungent bite. It's a somewhat aggressive move for a fish that couldn't be more in season (Shima Aji is best in summer), but fortunately, it doesn't overpower this shiromi (white-fleshed fish) and works well. 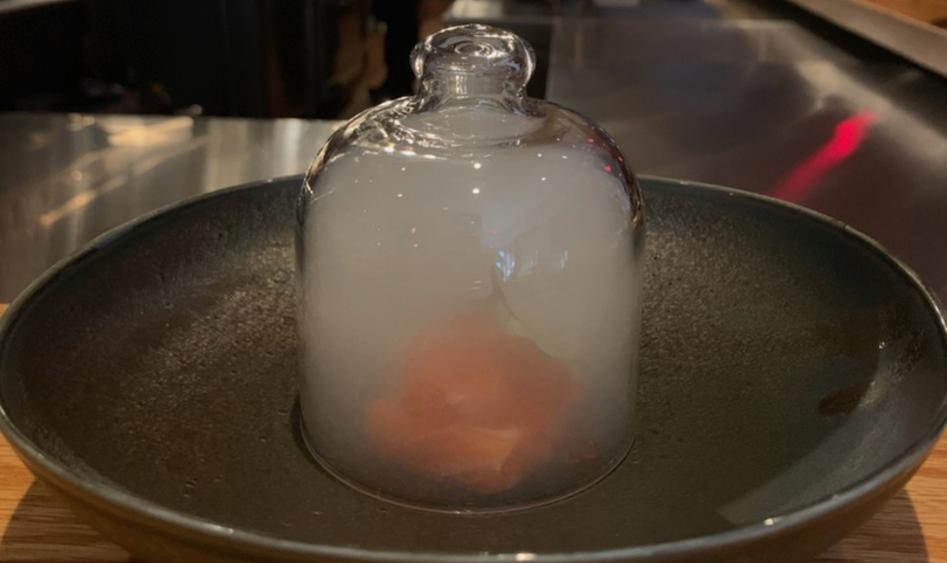