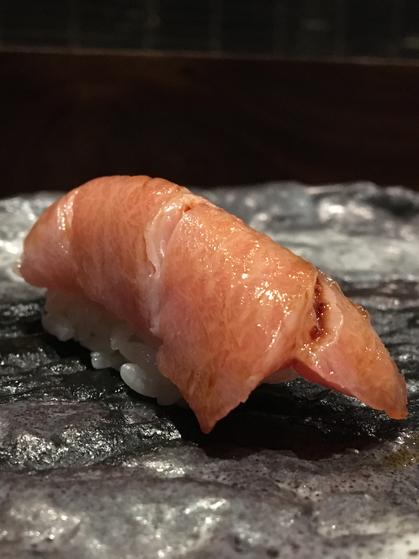 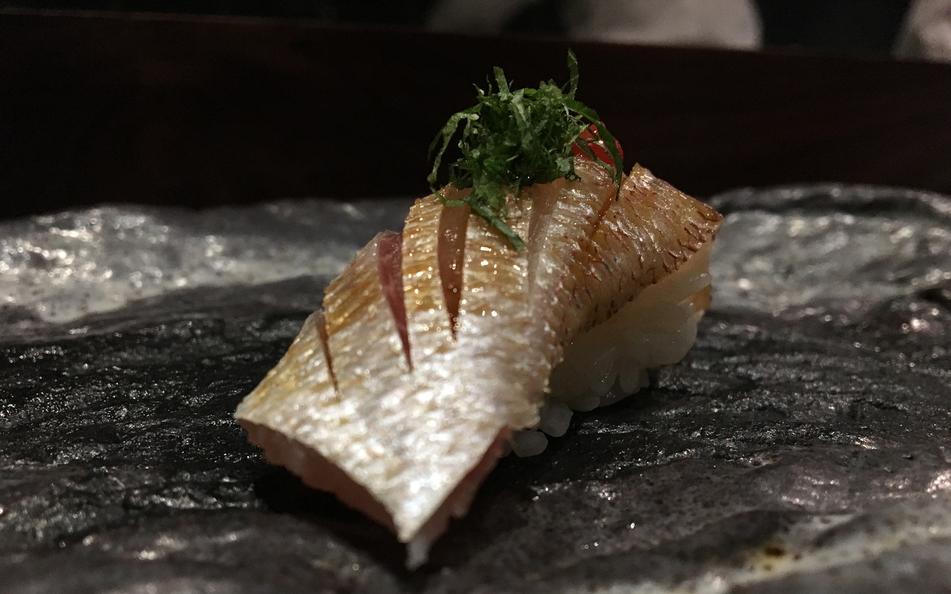 I've read reviews about Kosaka that have criticized the overbearing nature of the staff. Given that I was alone, perhaps I would have agreed if I was eating with another guest. But in this case, as a loner, I found Kosaka's waitstaff, hosts, chefs and servers to be warm, informative and polite. The general manager - Mihyun Han - explained the meaning behind many of the art pieces that adorn the window sills, counter tops, and even sushi plates (which are made of ceramic). Again, the art adds a unique aspect to the omakase, which - bias alert - is as about an artistic a meal as a foodie can have. Han controls everything that happens in front of the sushi bar, and has a intricate understanding of each course of the meal. As someone who has frequently been met with blank stares when asking front of house personnel to explain the food, Han's knowledge is refreshing - and efficient, since I don't have to bother Chef Yoshi with questions. The lighting is dimmed, but perfectly positioned directly over the sushi bar. As a result, diners will experience seclusion without sacrificing vision. A true piece of art.

A rt. To me, it's an expression of emotion and a conveyance of feeling that words cannot match. It's also one of the few words that lives its own definition. What is art? It's whatever you want it to be. And a few weeks ago, I decided it was a small sushi restaurant on 13th street in New York City. No, I haven't lost the plot.As  I stared around the beautifully designed space inside Kosaka  - the "l-shaped" sushi bar, the ambient lighting, the ceramic plates - I felt like I was eating dinner inside an art installation. I've been guilty in the past of ascribing a higher order to what is essentially a basic meal - it is, after all,  just fish on rice - but I couldn't help and enjoy the zen-like atmosphere of Kosaka. 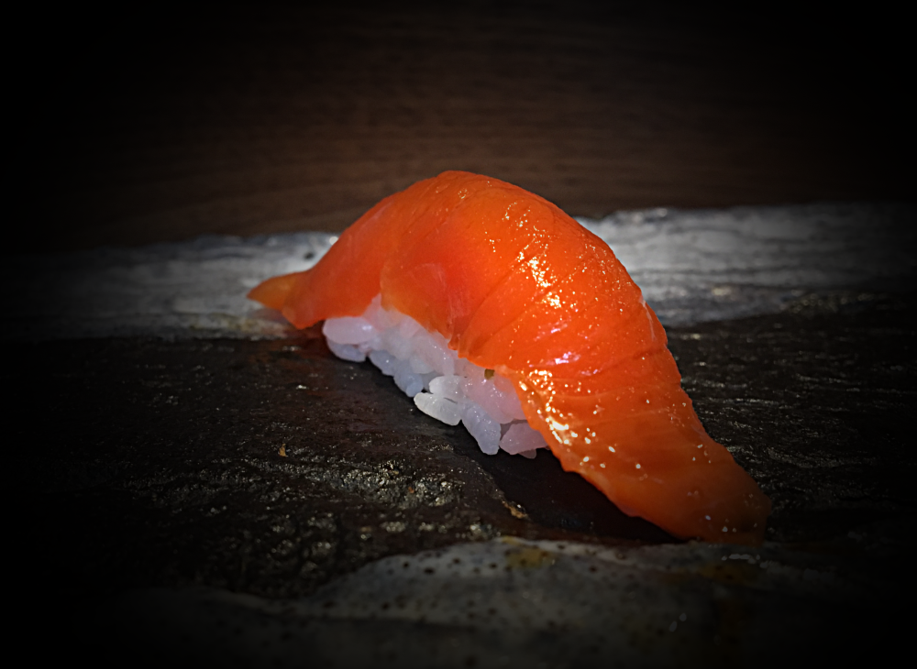 Kosaka is a true piece of art, worthy of the Michelin star it will no doubt receive. 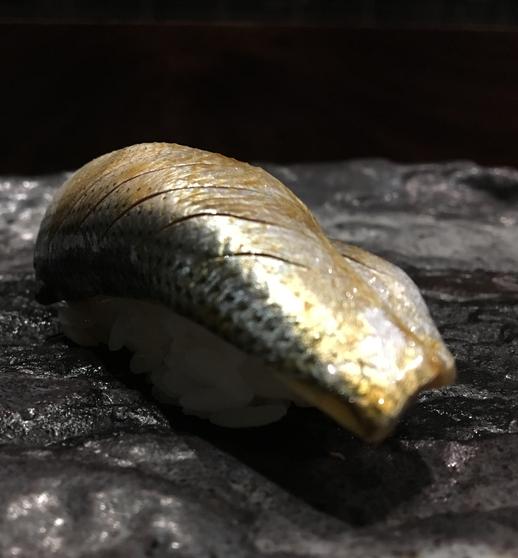 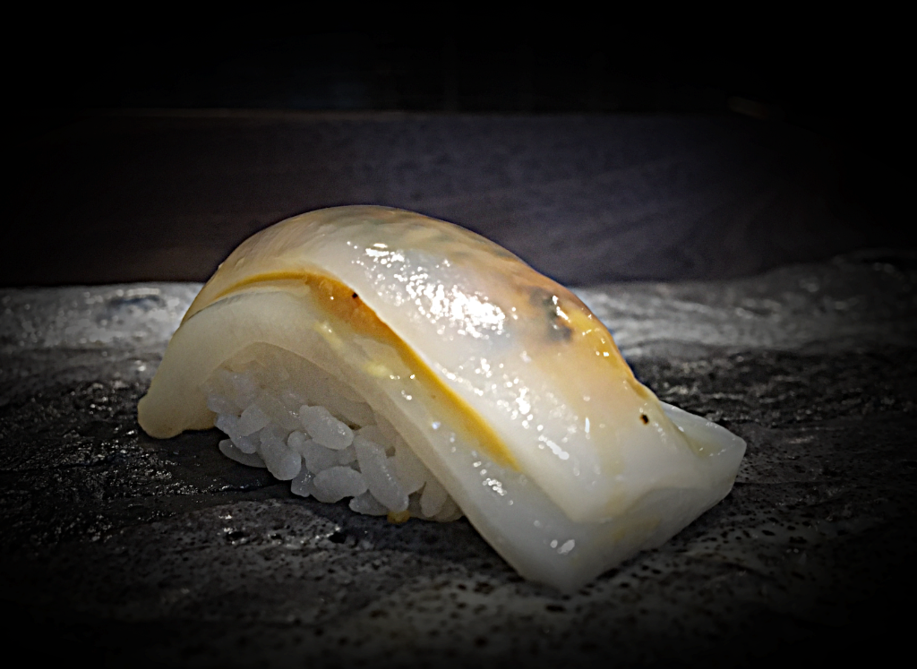 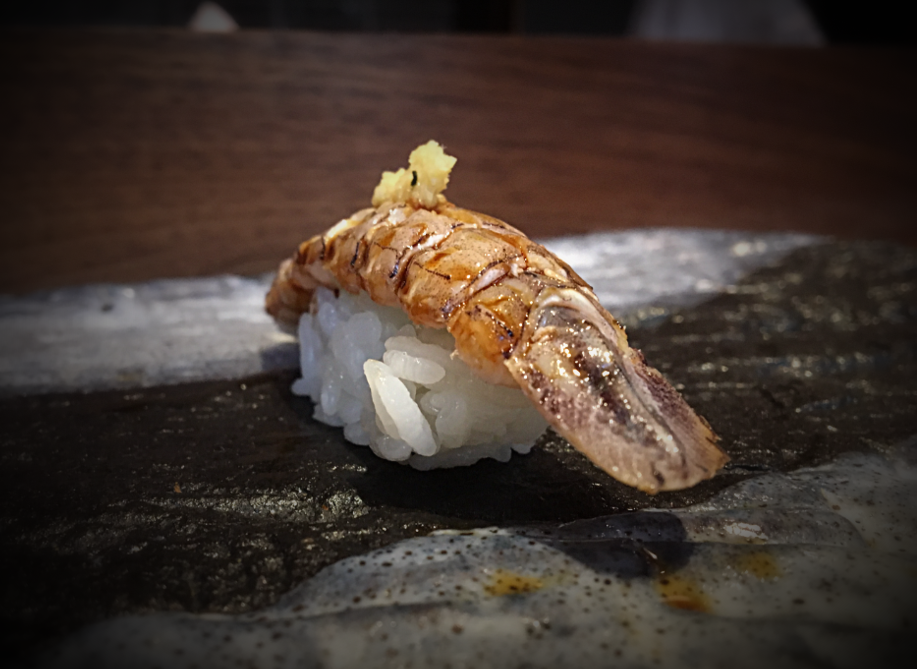 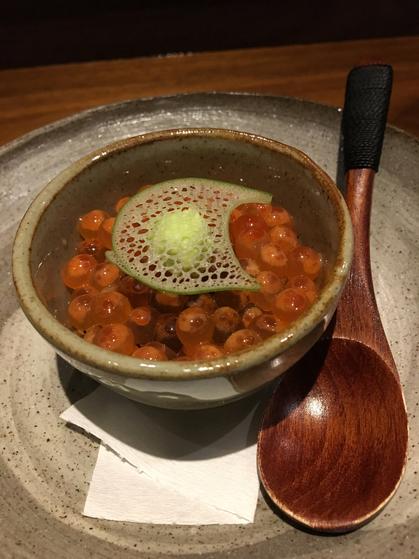 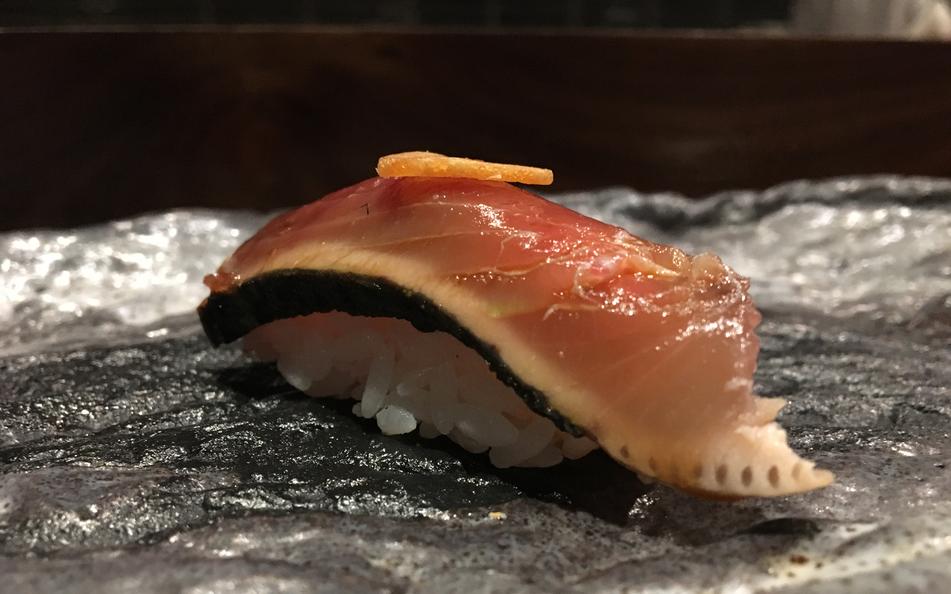 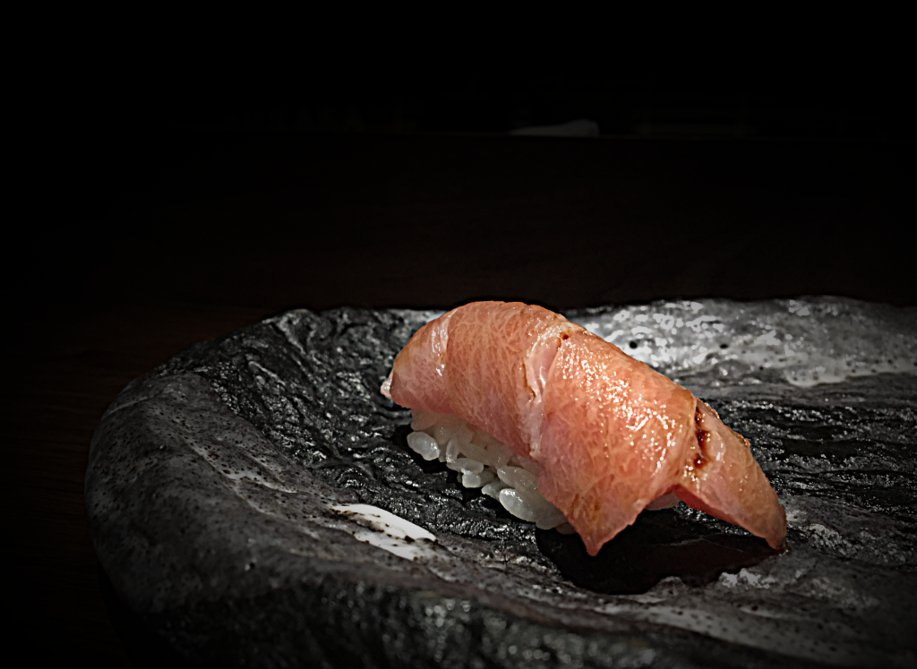 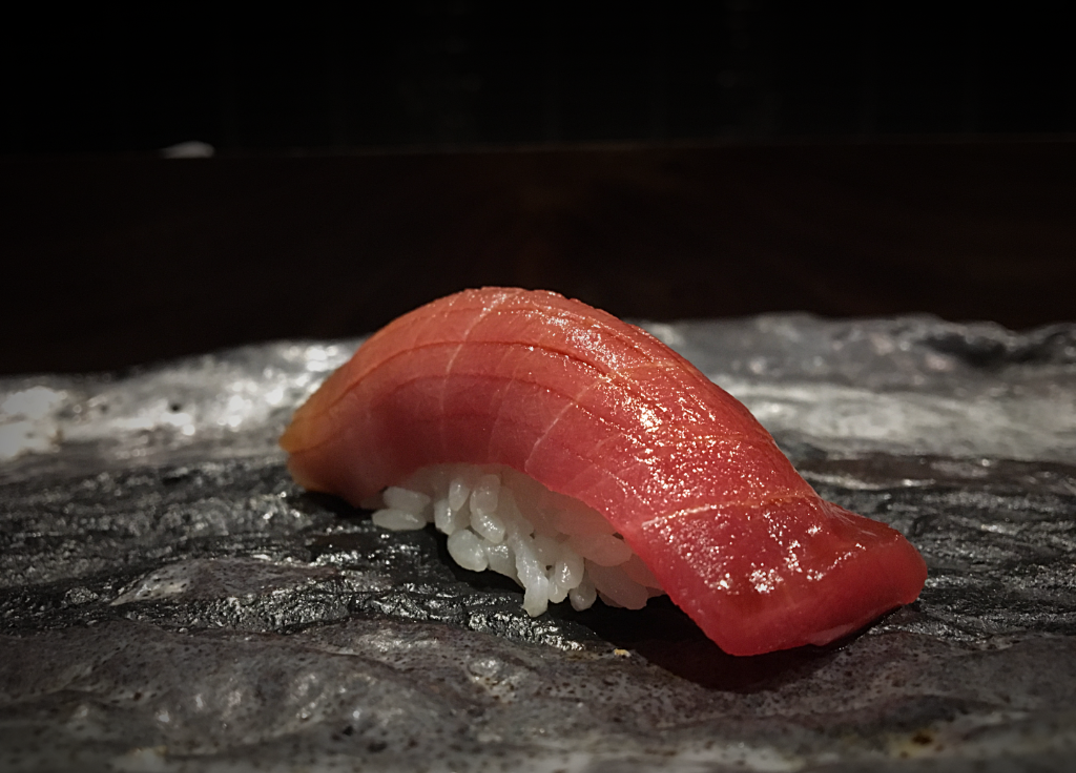 Kosaka is the brainchild of Chef Yoshi Kousaka, ex of Jewel Bako, a restaurant in the east village of NYC that I absolutely loved. The small, ambient rookie restaurant is another in a long line of high-end sushi spots that have opened in the lower parts of Manhattan. Yes, if you're a tourist to New York City, you likely plan stay closer to midtown. But consider these words of wisdom: all the incredible sushi is below 14th street. That allows a more seamless blend into residential surroundings, like Kosaka, which stands side by side next to tall brownstones. It's unassuming, but if you notice it, the entrance will certainly impress: drapes and ceramic art on the inside shelf, visible both outside and in. Helpful servers and hosts wait inside to escort patrons to either the L Shaped sushi bar or 1 of the few small tables. Chef Yoshi presides over the entire meal himself, and - not shockingly - creates an omakase like an artist.

One of the areas that distinguishes Kosaka (and his restaurant) is the attention to detail. Look at the Chu Toro (pictured above). Aside from the incredible colour - a byproduct of the best cuts of Japanese tuna - look at the slice on the fish. Not only is the width uniform throughout, the length perfectly matches the contours of the rice. Chef Yoshi also makes small incisions in most of his nigiri - this helps the soy sauce he applies (don't add extra!) to settle perfectly, and - selfishly - makes for incredible photos. The Shad (left in the pictures below) is hypnotizing. The anago is scorched but not overdone, meaning that the eel sauce gets to be the star (as it should be). I particularly enjoyed the Katsuo (skipjack or Bonito), a tuna family member that is often leaner (and therefore less delicious) than its fattier cousins. This version, topped with a light truffle sauce, is a testament to how keeping fish toppings simple is paramount when being adventurous.

Most impressive though, is how much emphasis is placed on the non-nigiri courses of the omakase. The negi toro temaki - pictured at the bottom on the left - is among the best I've ever had. Chef Kousaka fills the rice and the negi toro on separate sides of the nori, rather than on top of eachother. The result is even bites of both fillings throughout. The bowl of ikura - pictured at the bottom on the right - is a staple from Yoshi's omakase at Jewel Bako that thankfully has made the trip to the new joint. In this reviewer's opinion, ikura deserves its own stage, without any of that pesky rice or nori to hold it back. It shines. 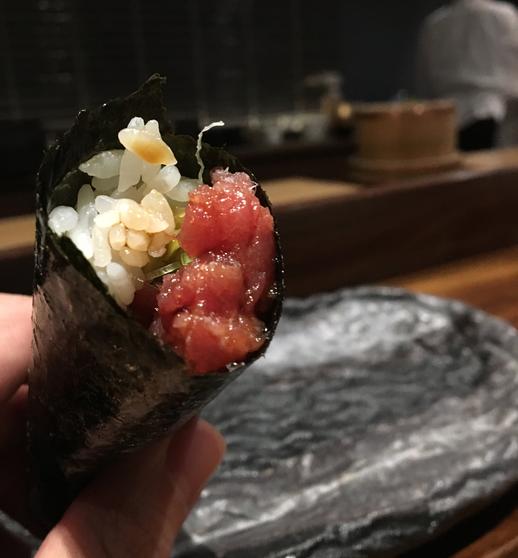