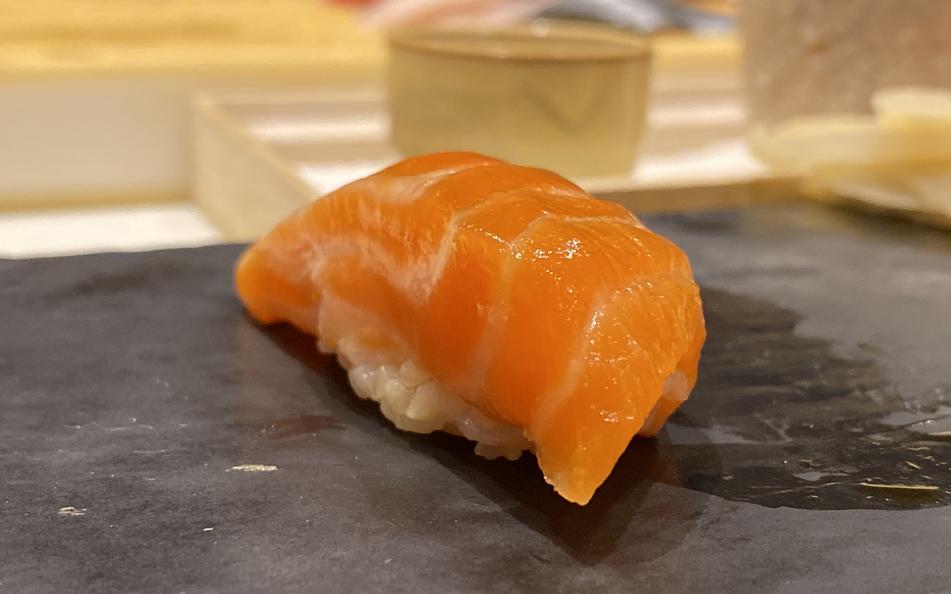 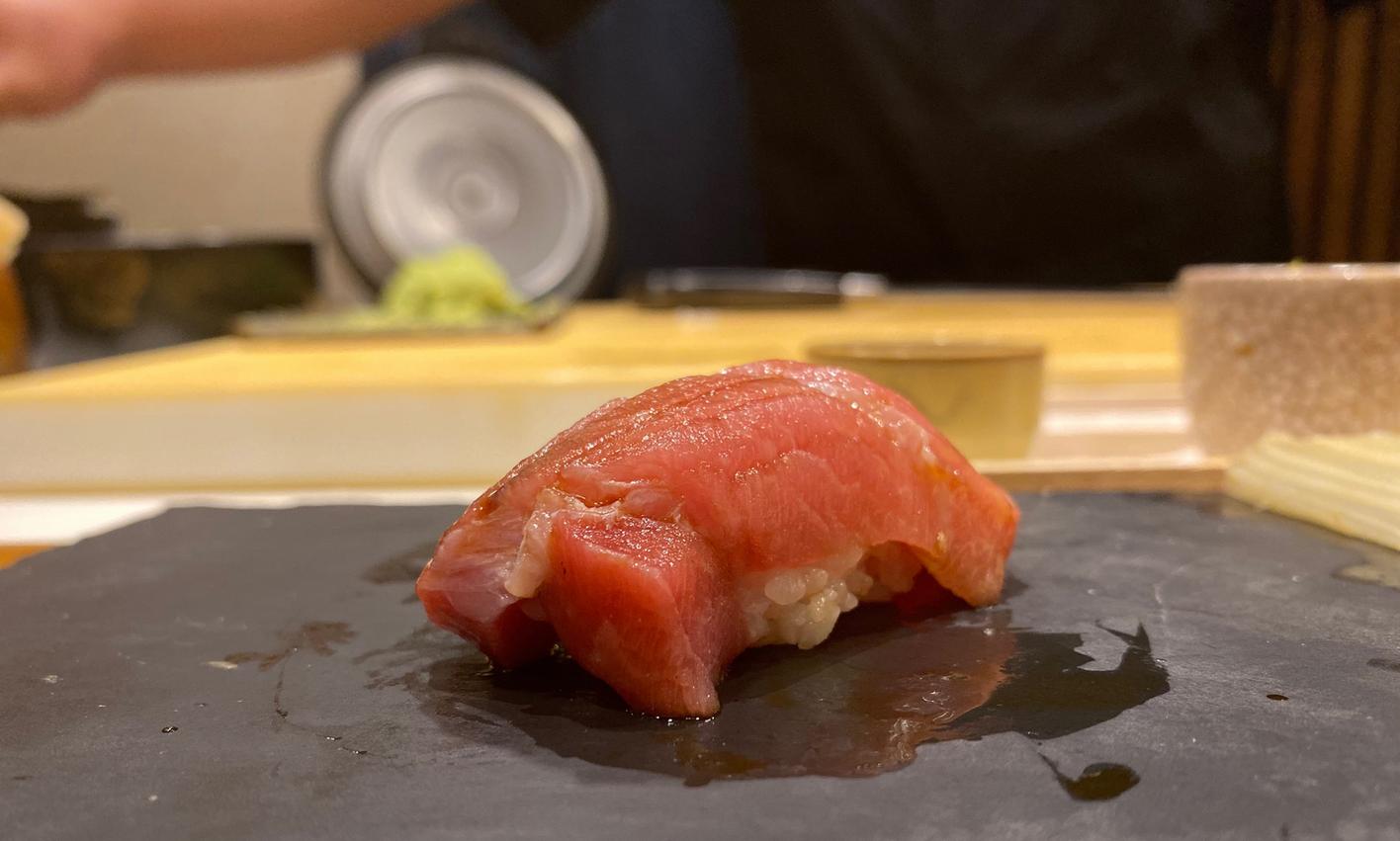 I t’s not hard to find Mini Sushi Bar at Washington D.C.’s Mandarin Oriental hotel: the flag next to the lobby is the giveaway. Despite that, Mini is still reminiscent of the tucked away sushiya from Japan. That’s intentional, according to my itamae/server/host, Jin. Jin is a recent disciple of Chef Minoru Ogawa, who DC sushiphiles might know from his other DC spots, Sushi Ogawa, Zeppelin and Sushi Capitol. I visited the latter in 2014, the results of which can be read here if you want a time portal into this blog from last decade.

There’s some hint on the world wide web that Ogawa may not be in control at Capitol anymore, but no confirmation. What is confirmed is that his sushi empire is built on a family history in business from their home in Japan. Trained by his father in Nippori (a neighborhood in Tokyo), his family-run sushiya has been open for almost 50 years. He now carries on that legacy of education stateside, training younger chefs. Jin himself started at Zeppelin earlier this year and has progressed to “running” his own shop at Mini.

Last, I’d be remiss if I didn’t mention this bonkers Yelp review of Mini Sushi BarI came across during some background research before my visit. Despite the fact it will likely be as extinct as the stegosauras within the year, Yelp is still a somewhat valuable resource. Most times. But seeing a reviewer write that Mini is “truly the saddest place I have ever been in my life” makes me straight up question humanity. Unless that person lives on a rainbow partying with the leprechaun for lucky charms, I’m going to go out on a limb and suggest that an 8 seat sushi counter is not the saddest place you’ve ever been. 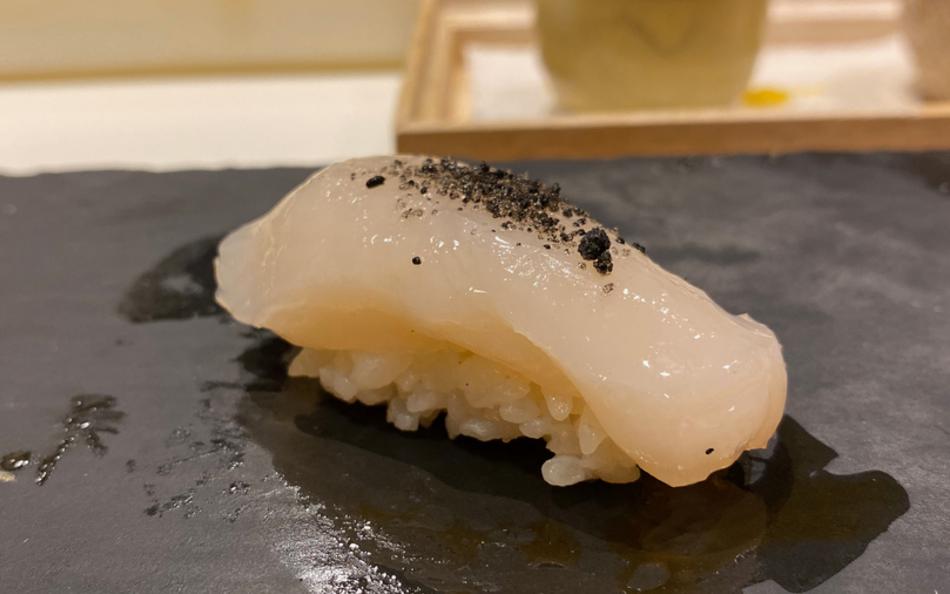 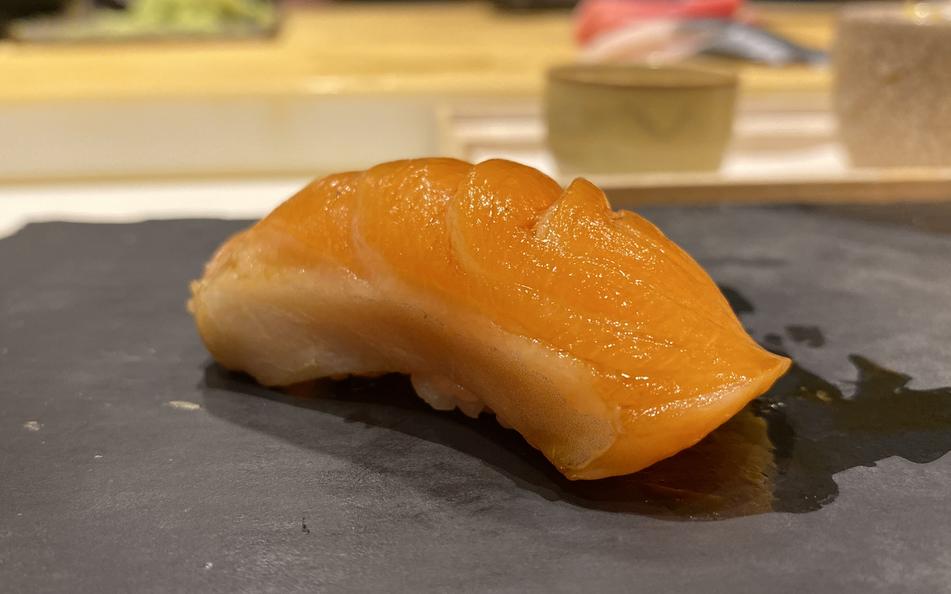 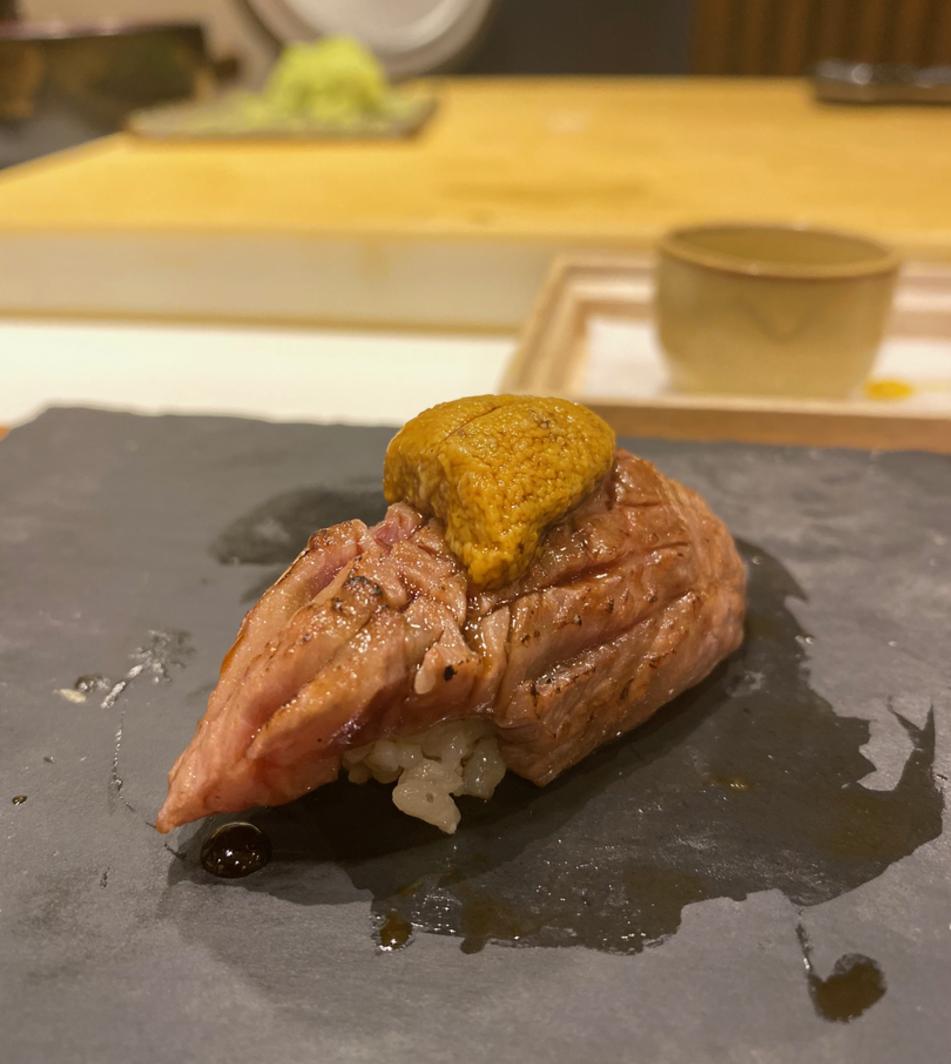 Char follows. Depending on species, char, trout and salmon can often be mistaken for one another, even by a well-meaning server or even sushi chef. At Mini, the pale colour of the Char makes it easy. Torched Kurodai (black snapper), an in-season white fish, is next, followed by the only misstep of the evening: Hotate (scallop), with an entire salt mine dumped on top. Scallops can be on the blander side, so most itamae will dress it up. I have a sneaking suspicion that a tablespoon (or teaspoon?) of rock salt isn’t common. 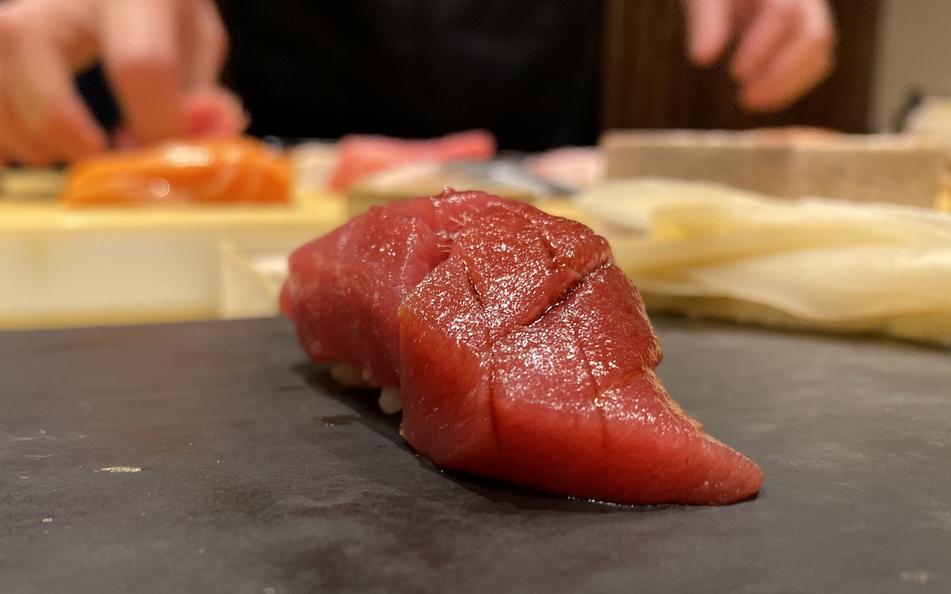 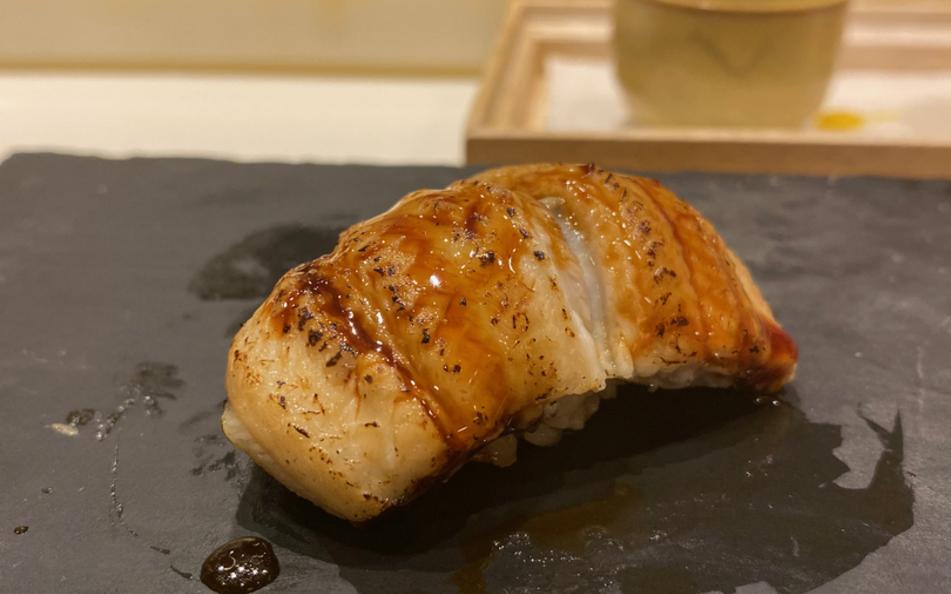 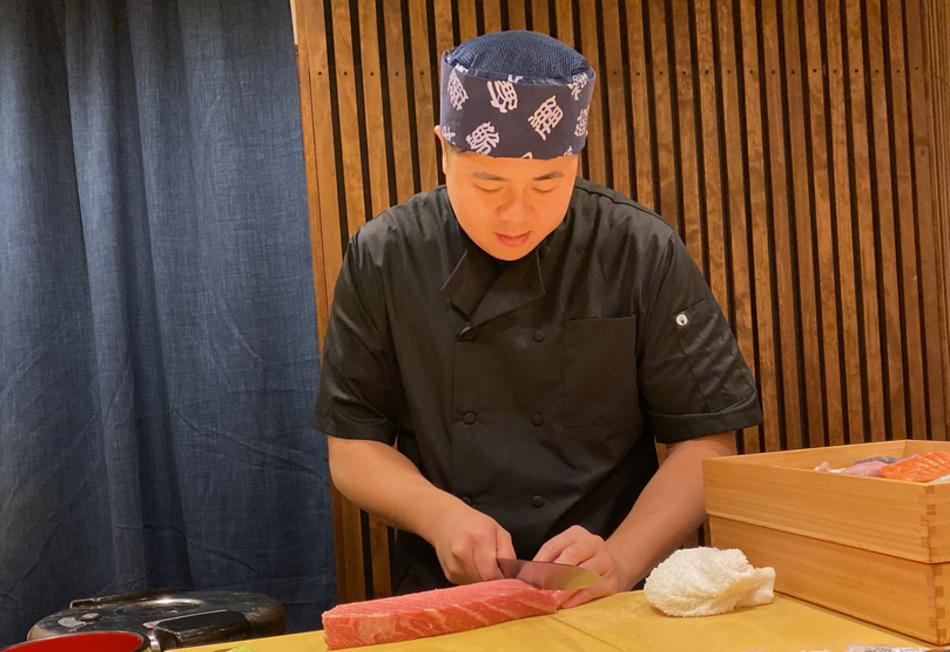 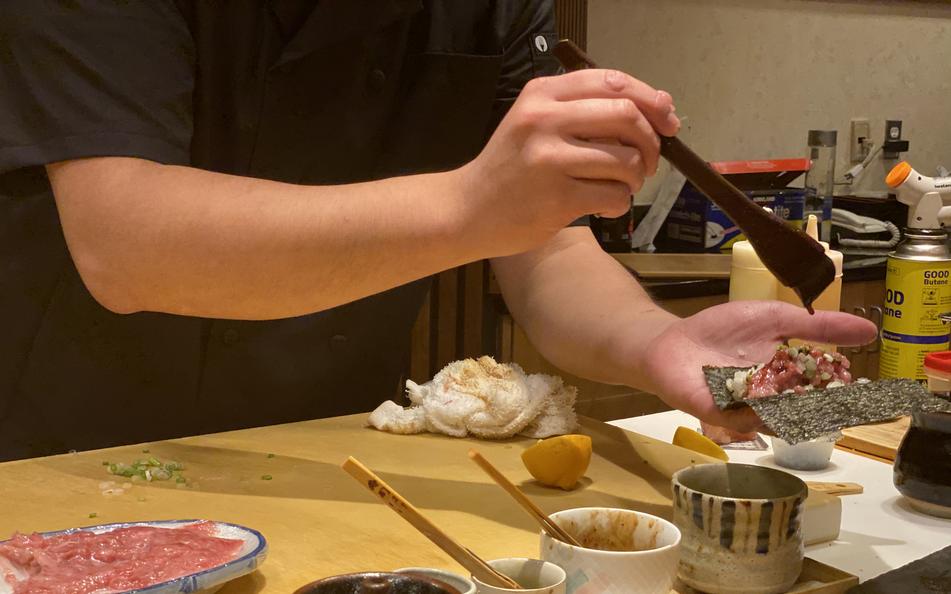 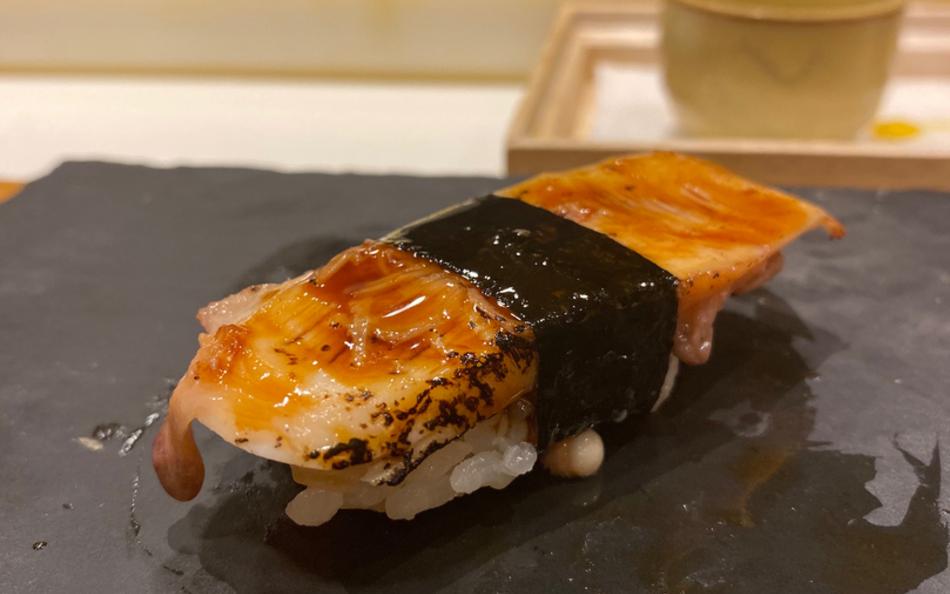 Botan Ebi (peony shrimp), a personal favourite, is chopped until it almost resembles Shiro Ebi (small white shrimp) at a passing glance. I haven’t seen this very often (if ever?), probably partly because it’s tough to mold to rice (non-Gunkan), part because it takes some time. In this case, it holds and tastes delicious. It doesn’t hurt that me and my pal are the only two people in the place. 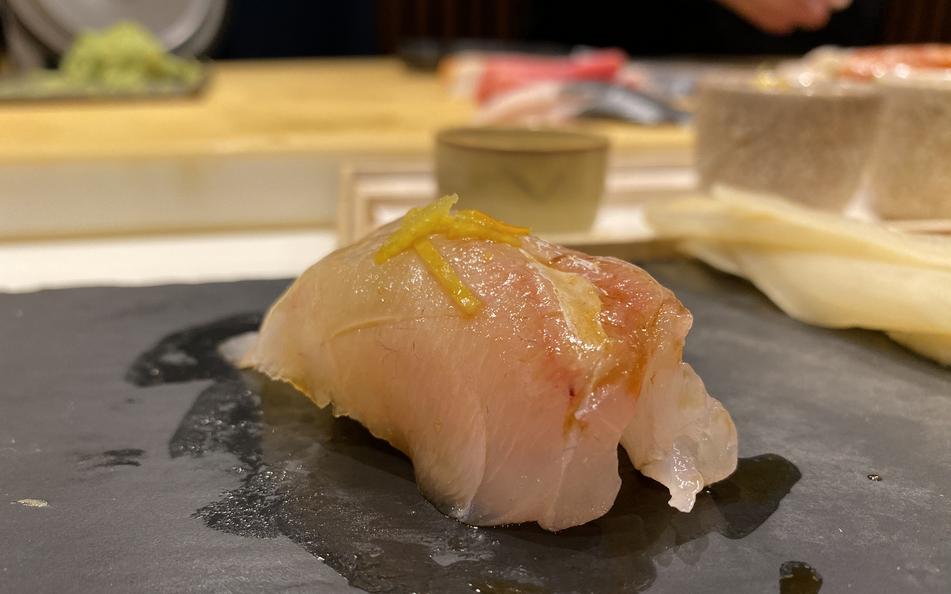 I touched on this earlier, but despite just an 8 seat counter, my chap and I were the only two people in the place. 2 or 8, Mini will feel cozy no matter how many customers there are. For some, that intimacy is a good thing. For others who may be irrationally scared that they're the focus of a hidden camera show (hand up), perhaps not. 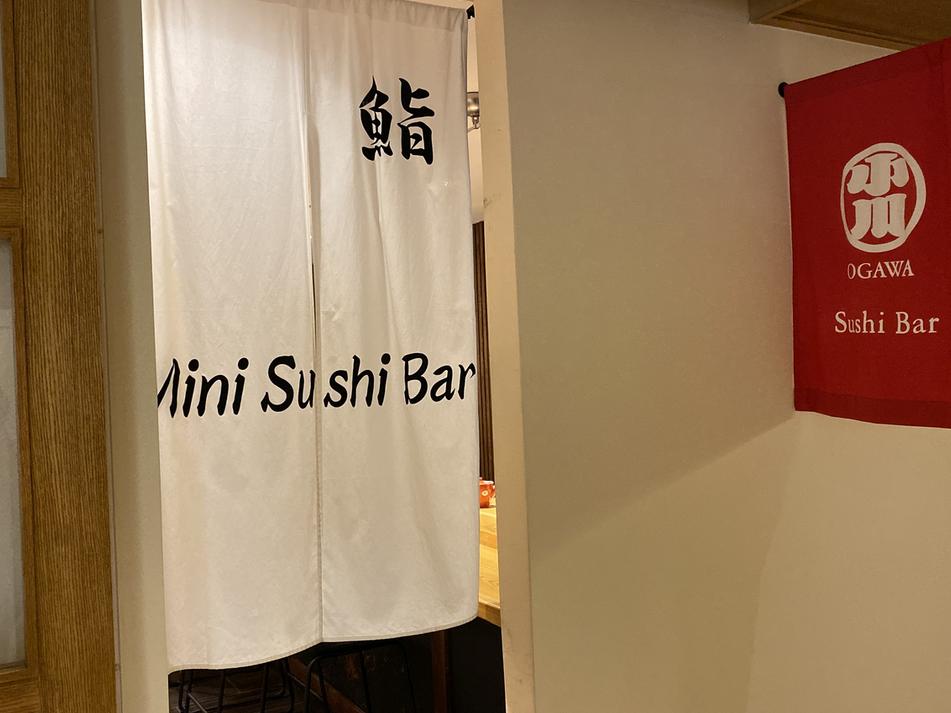 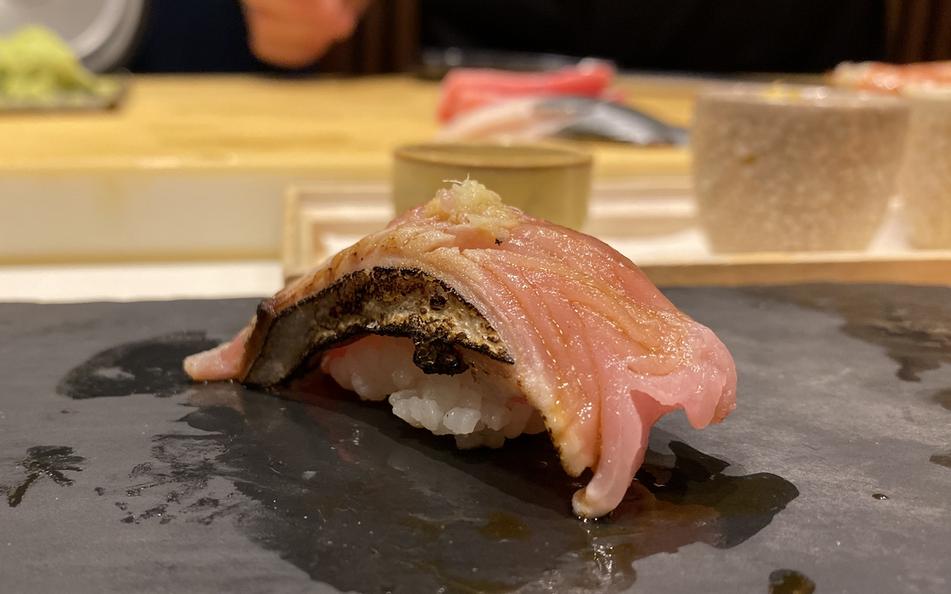 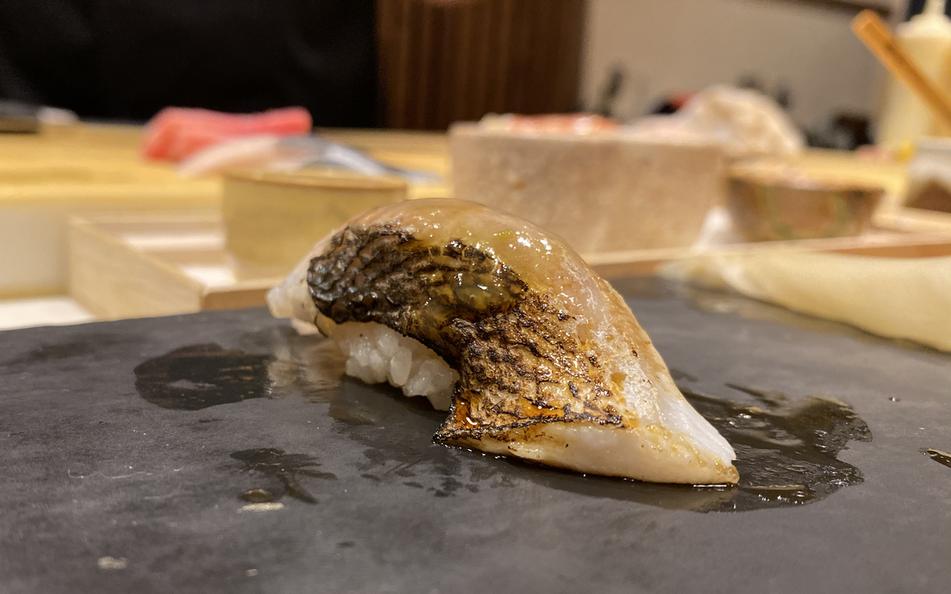 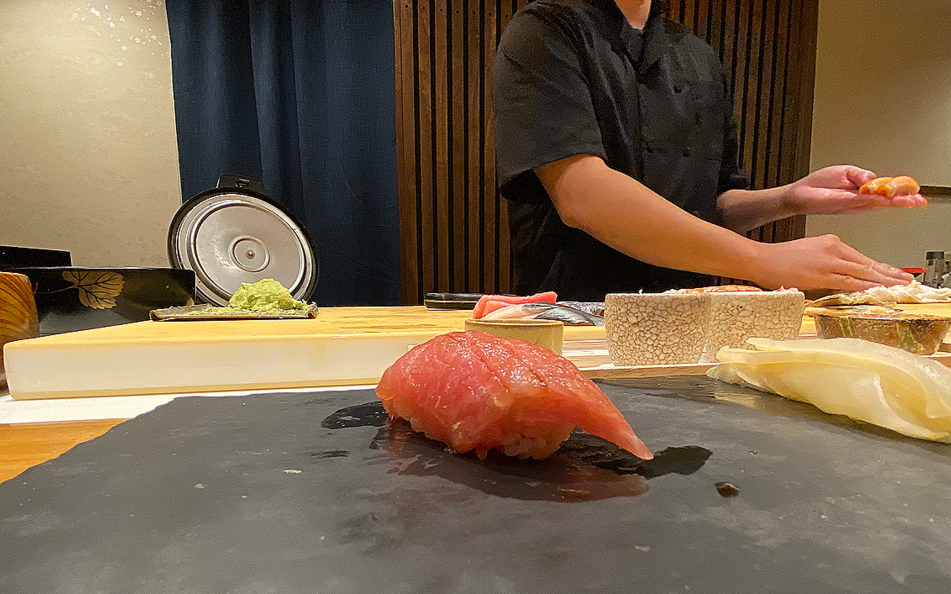 The two pieces of nigiri below - O Toro (stronger tuna belly) and Kanpachi (Amberjack) are contrasts in aesthetics and preparation. O Toro​ is lightly dressed with ​Shoyu soy sauce and presented with a good visual balance with the Shari (rice). The Kanpachi on the other hand, drapes over the Shari like a blanket, perhaps with one or two stray knife cuts mixed in (I'll let you be the judge). On top, what I believe was shaved Yuzu - not Yuzu zest, but literally shaved from the fruit itself. Jin, if you're reading this, a) that's sweet and b) let me know if I'm right. 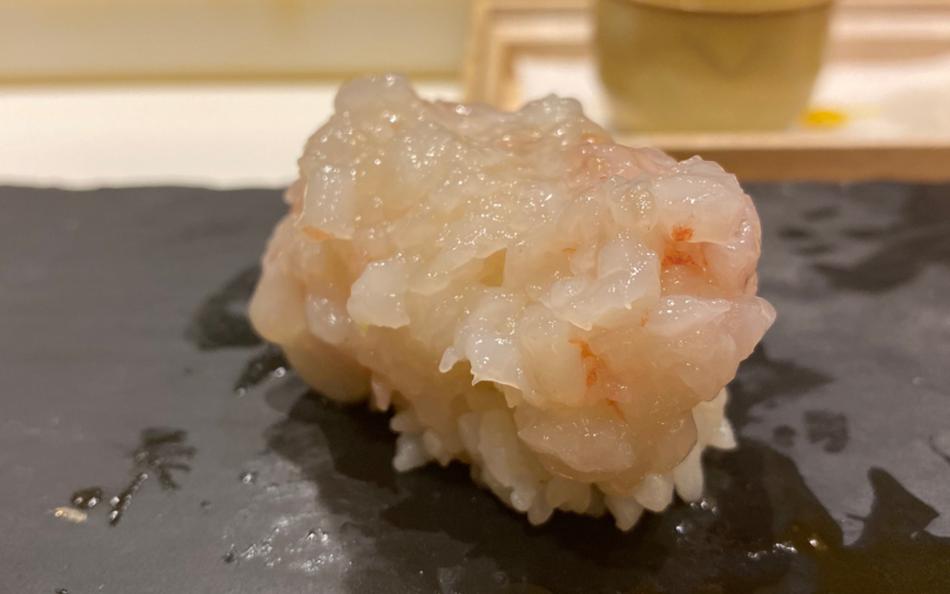 Though there are ostensibly options on Mini’s one page menu, choosing what to get should be straightforward. On one hand, the Omakase. $100. Leave it to the chef to theoretically choose what’s in season. On the other hand, a California roll, filled with Japanese mayo (aka Srircha and mayonnaise), priced at a potential world record of $20. Because I have a functioning brain, it’s an easy choice.

My omakase – like many others, it seems – starts with Akami (lean tuna), which Jin cuts thick. You’ll never hear me complain about more fish, though some of you may be used to a thinner slice. Buri (adult wild yellowtail) and Sake (salmon) follow next, each dressed with Shoyusoy sauce. Word to the wise – if you’re expecting fast food style mayo on your nigiri, Mini – and probably most traditional sushiya – aren’t for you. 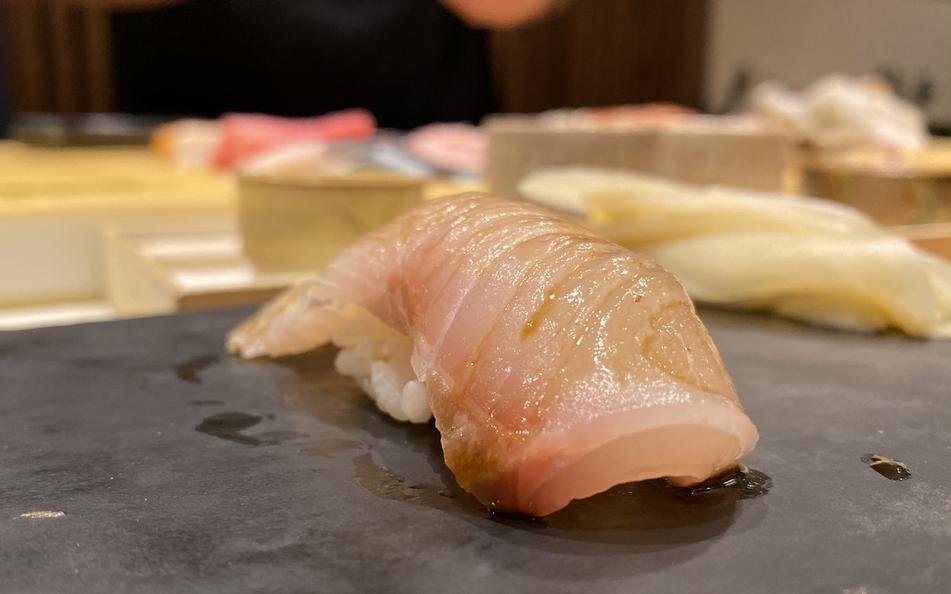 A few other highlights worth mentioning. The Tako (Octopus) is marinated inside a Tupperware container, torched and served with a nori strip holding it all together (pictured above). If you ask nicely, Jin may also toss an Octopus tentacle your way.  Then there's the Katsuo (Bonito), which is in-season twice a year: once, in Spring, when they migrate away, and once in fall, when they migrate back, nice and fat (I'm not a marine biologist, so don't ask me more than that). Mini's Katsuo, with a touch of minced ginger on top and also torched, was filled with flavour.