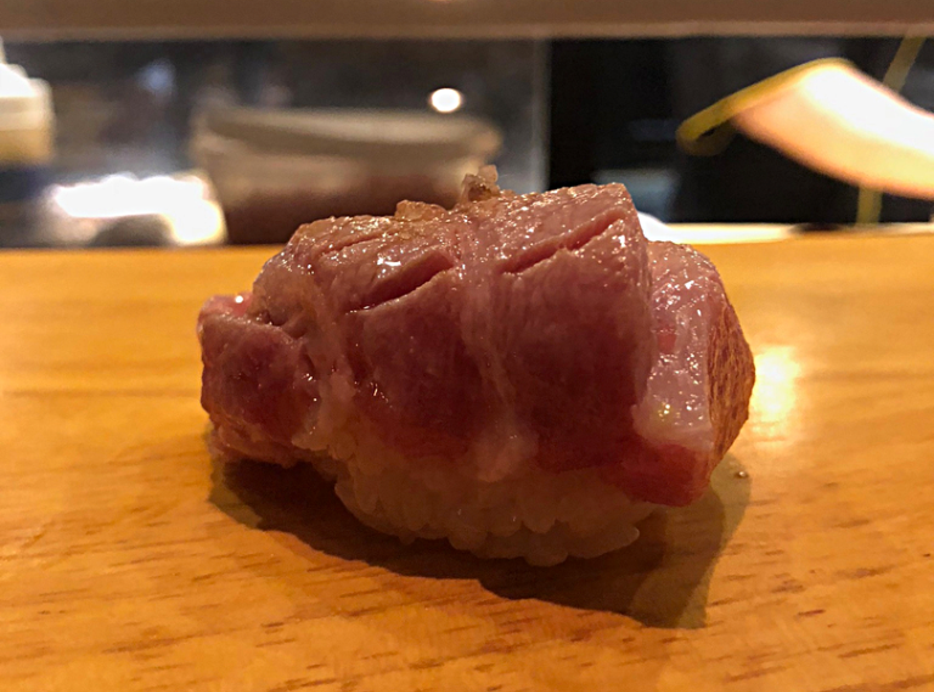 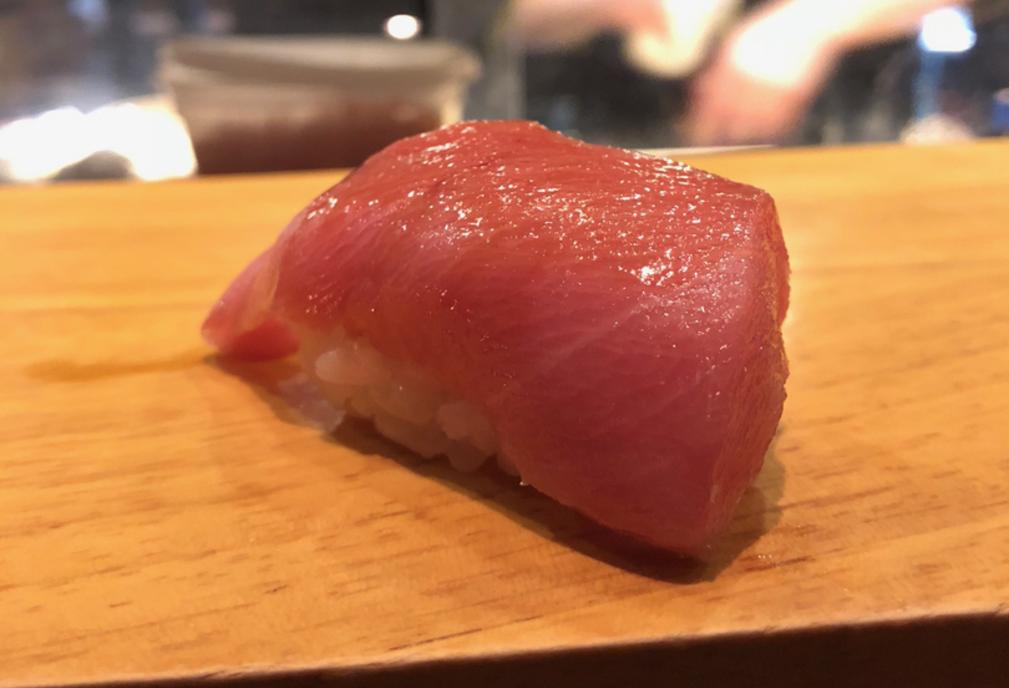 Of course, this is a sushi blog (slash sushi soliloquy), so let's talk about what Sato-san does behind the counter, because it's pure magic. It's not an obvious magic like Harry Potter; there aren't any fancy aging techniques or irregular fish. Rather, it's in how he meticulously forms each piece of sushi and dresses it accordingly. Madai (Red Snapper) with lemon zest and rock salt (pictured right) is outstanding.  Uni and Ika (pictured below right) are common bedfellows for which Sato-san eschewed the gunkan style to present without nori​ . A purer taste, in this writer's opinion (third person switch alert).

The omakase continued with the leaner stuff: akami (lean tuna) and Aji (horse mackerel). The shape of each cut was unique (e.g. a 'tail' on the Akami, none on the Aji), but the consistency of the rice was not. Unlike midtown neighbor Satsuki, the shari (the rice, the lifeblood) remained both fresh and compact. Other highlights included the Botan Ebi (sweet shrimp) and Chu Toro (medium tuna belly), dressed only with a brushed layer of Shoyu (Soy Sauce).  I'd be remiss if I didn't mention the Shima Aji (striped jack), which is both aesthetically pleasing (check out the slivers of silver, red and translucent colouring, no accident by the skilled itamae) and absolutely delicious.

The kitchen utilizes both familiar classics and seasonal ingredients to compose the five dishes provided before the nigiri​ is served. Wagyu beef on a hot stone would fall into the former category and was as delicious, fatty, flavour-filled as you might expect. The adornment is seasonal; maple butter, usually best when maple is harvested in late winter and early spring (as a Canadian, we're tested on that every day).

Miso soup with lobster and green onions (pictured below) was flavorful and perfectly hearty, but also familiar. Ebi Shinjo - simplified, a deep fried shrimp ball - was a new one. Breaded but fluffy,  and served with shisito peppers and lemon for flavour, it was the perfect opener, even for someone with a phobia of fried food. A hearty dashi​, filled with eggplant, lobster and squid, was delicious but suitably small (there are like 40 courses after all).

Nare Sushi ​is on 57th street,  down a small set of stairs and inside the atrium of an office building. The space is dark but expansive. The aforementioned three floor concept contributes to that, but so does the skylight at the top of the 30 foot ceilings (completely a guess). We visited for dinner, but I suspect that a daytime visit would have a completely different vibe as a result.

I don't usually discuss the waitstaff service in these reviews, because they aren't as present (obviously) compared to the standard restaurant. But given the cooked dishes on offer in Nare's ​kaiseki menu, it's impressive (a) how knowledgeable the servers are and (b) how perceptive they are to clean plates and bring the next course. And if you elect to add wine or sake pairings to your meal - which we did - the staff are just as quick to bring the next glass at the right time, which I found easier to tolerate than the server (that we've all met) that's a little ​too quick to pour the next glass from the bottle you purchased.

​But honestly, the service starts and ends with Sato-san, who is just as invested in conversation as he is in his sushi, and just as focused on the other side of the counter as he is his own. For instance, he noticed nearly immediately that Mrs. Sushi Legend is ambidextrous, which led to a 10 minute discussion on how it's possible to write with a left hand and play tennis with the right. Trust me, that's a far more dynamic conversation in person than it seems. Ultimately, Nare​ isn't going to be confused with Kosaka ​aesthetically, but given the price, service, waza and - most importantly - sushi quality, it's worth a visit.

The menu at Nare Sushi is not omakase only; there are sushi options a la carte of course, but also cooked dishes that make use of the kitchen's skill with Japanese cuisine. And prices are reasonable considering the ingredients. If leaving it to the itamae is your preference, there are two directions I'd recommend. The first, a 15 piece, $75 sushi-only omakase, is seemingly one of the best-valued options in New York. The second, which is what we ultimately chose, is a market ingredient focused omakase/kaiseki hybrid that runs about $100. ​​ 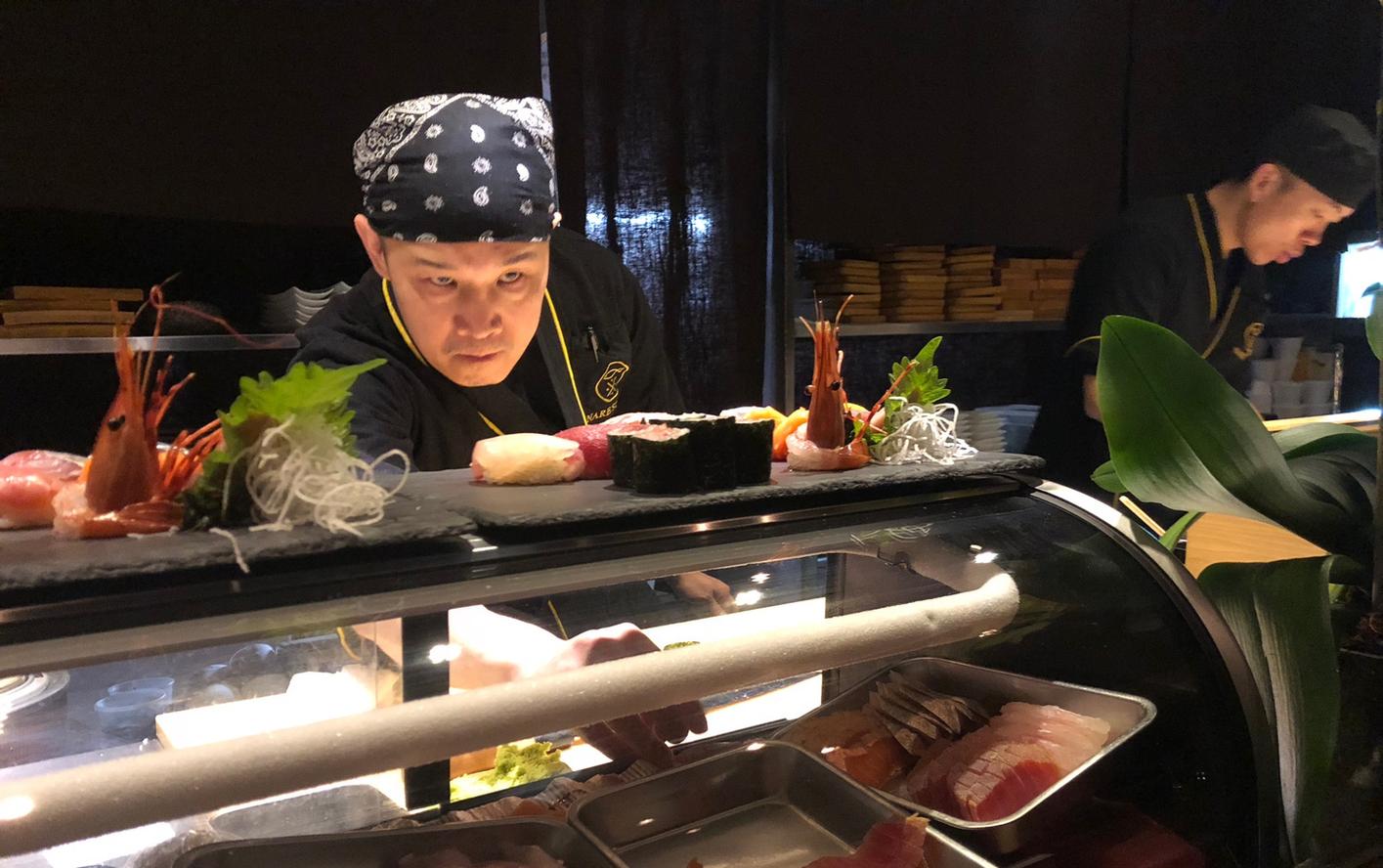 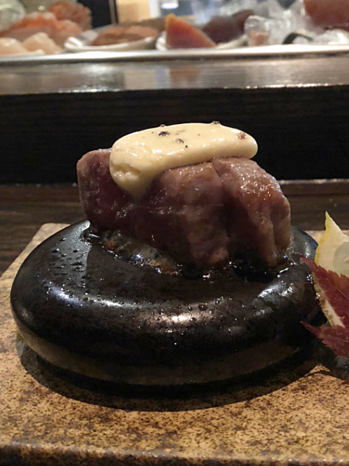 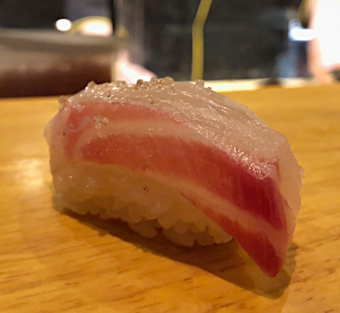 T his time of the year isn't particularly enjoyable for me. For readers of the blog or those unlucky enough to follow my social media adventures, you might recall that I am a long suffering Toronto sports fan, cursed to live out each April with the same cycle of guarded optimism followed by crushing disappointment. That's simply the life of a fan during the NBA and NHL playoff season. The good news is that Sushi - along with Mrs. Sushi Legend - is my lifeblood (what a husband). So while the more normal psychos are out there calming their heartbeat with whisky and beer (in that order so you're in the clear), leaving sushi in the hands of incredible itamae ​is what keeps me sane.

And make no mistake: Takeshi Sato, the maestro behind the sushi counter at ​Nare Sushi, is a focused, intelligent and masterful itamae.​ ​Nare Sushi, apparently the subject of this review, is a midtown New York City sushiya, hidden within an office building at East 57th. The location is unique for New York City, but may seem familiar to those who have visited Tokyo. The interior though, won't: three floors, open concept, with a sushi counter positioned at the top like a throne. And the king presiding is Sato-san, a friendly soul with a serious focus. How serious? On the side, he's a professional boxer (Japanesebomber.net, here's a free plug). I'm told they call boxing the "sweet science" (my combat sports experience is limited to tackle duck duck goose), so I imagine that the diligence and concentration Sato-San uses to succeed in the squared circle are useful behind the sushi counter as well. 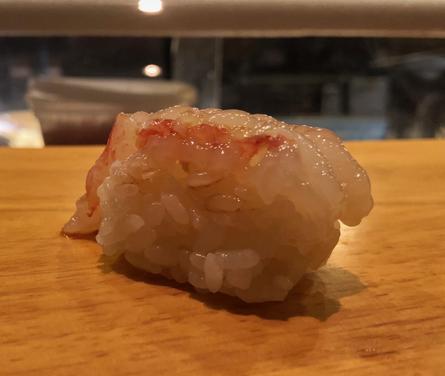 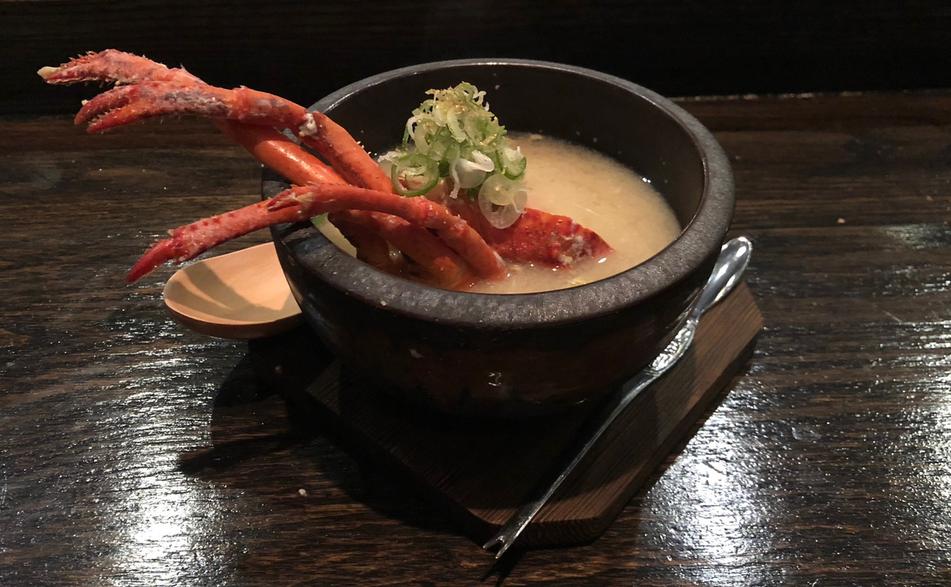 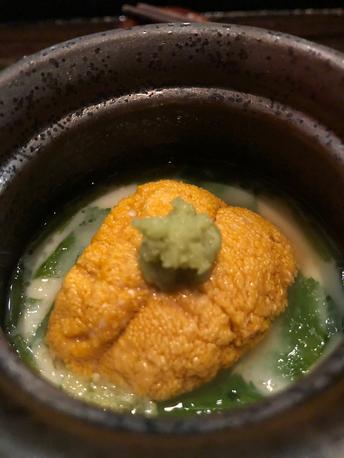 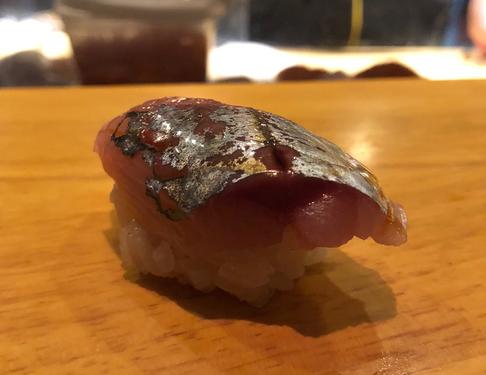 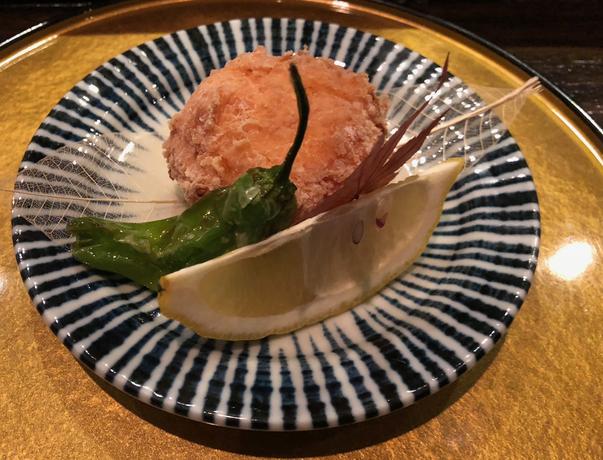 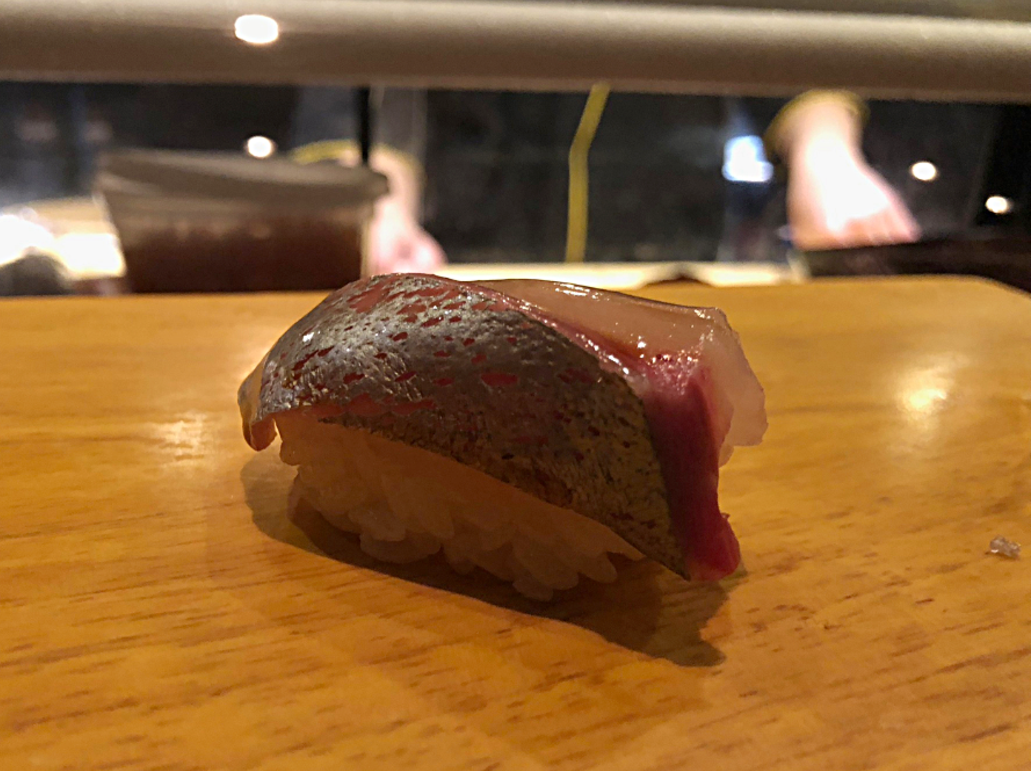 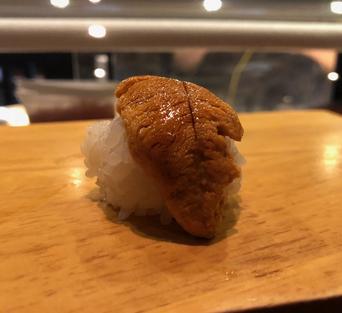