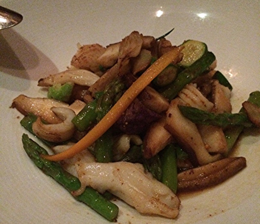 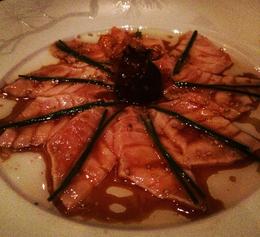 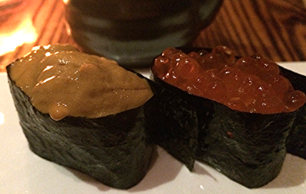 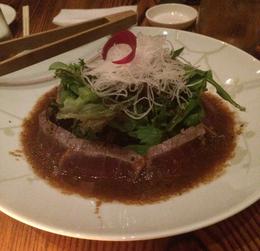 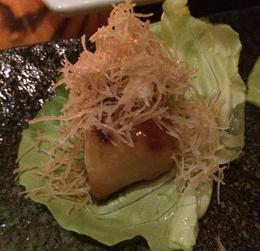 So here's the thing about Nobu...it's legendary - and it's been passed by.

It can certainly be argued that Nobu was at the forefront of the sushi craze that has taken over North America (and by extension, the western world).  It's first restaurant was opened in 1994, through a partnership between famous restaurantuers, celebrities and Chef Nobu Matsuhisa. With 30 restaurants as of 2014, that initial restaurant has certainly been parlayed into a successful restaurant group. It's easy to say that Nobu benefited from the rise in popularity of sushi, but I'm not so sure it's that simple; Nobu introduced a generation of foodies to sushi, while still offering more standard high-end menu options that they might have been used to.
​The New York location of Nobu that I visited happens to be the original. At one point over the past 20 years, the dinner hours got to be so busy that "Nobu Next Door" was opened two doors down for spillover traffic (I reviewed it here). The original though, is far more visually appealing. Located inside an old bank, the wine cellar has actually been built into what used to be the bank vault. The overall design is very Japanese and very zen, and certainly is eye-catching both when you enter and when you eat
​

The food is described by Nobu as being Japanese with peruvian influences. In layman's terms, there is sushi, as well as cooked fish from South America with Japanese flavors. Nobu's most famous dish is their black cod miso (pictured right), which has been duplicated many times over at similar types of restaurants (read: Zuma). That said, it's still phenomenal and a must get. Another delicious non-sushi dish is the squid pasta, mainly because of how unique it is (pictured right).

From  a sushi perspective (and why else would you be here if not for sushi), Nobu has a few signature dishes that aren't necessarily so traditional. Spicy Tuna crispy rice is literally everything I hate about Americanized Japanese food. It's fried rice squares served with a pre-mixed bowl of "spicy tuna". And yet, the dish is still delicious.

The other "signature" sushi dish is Nobu's "New Style Sashimi" (pictured right). It comes with a variety of fish, but the result is the same - pieces of sashimi, covered with oils and spices and flash fried. Not to get all deep, but this is a dish that honours traditional Japanese sushi while still updating it for a more modern flair. It's since been sort of incorporated at high-end sushi restaurants in omakase offering - for example, the next time that you wonder if the blowtorched amberjack is a time-honoured Japanese tradition, think of Nobu's New Style Sashimi.

That said, it's hard to go to Nobu without comparing it to other sushi restaurants, and in that regard, Nobu begins to feel dated from a sushi perspective. The offerings on the sushi menu are much more standard than you'd expect, which makes the decision  to charge so much for nigiri even more ridiculous. Seriously - Bluefin Toro was $20 per piece for nigiri. Some of you might be offended that they were advertising "Bluefin Tuna". I was offended that they were charging $20 for something that wasn't even labelled as "chu-toro" (sushi snob alert).

Even The Atmosphere is dated. Though the decor is beautiful, closer inspection shows there is some wear and tear. That said, the service was by far the biggest problem - our meal took approximately 90 minutes to get all of our food, which shouldn't happen, especially at a restaurant as experienced as Nobu. And forget about asking the waiters for water or anything else - they seemed completely disinterested. When you've been around as long as Nobu, and dealt with as many customers as they have, I'm not surprised that the service standards begin to wane just a little bit.

I imagine that Nobu appeals mainly to tourists, and it does offer a good meal all else considered. But this is a sushi blog, and in that area, Nobu falls short. I would recommend multiple other places before Nobu if sushi is what you are looking for.