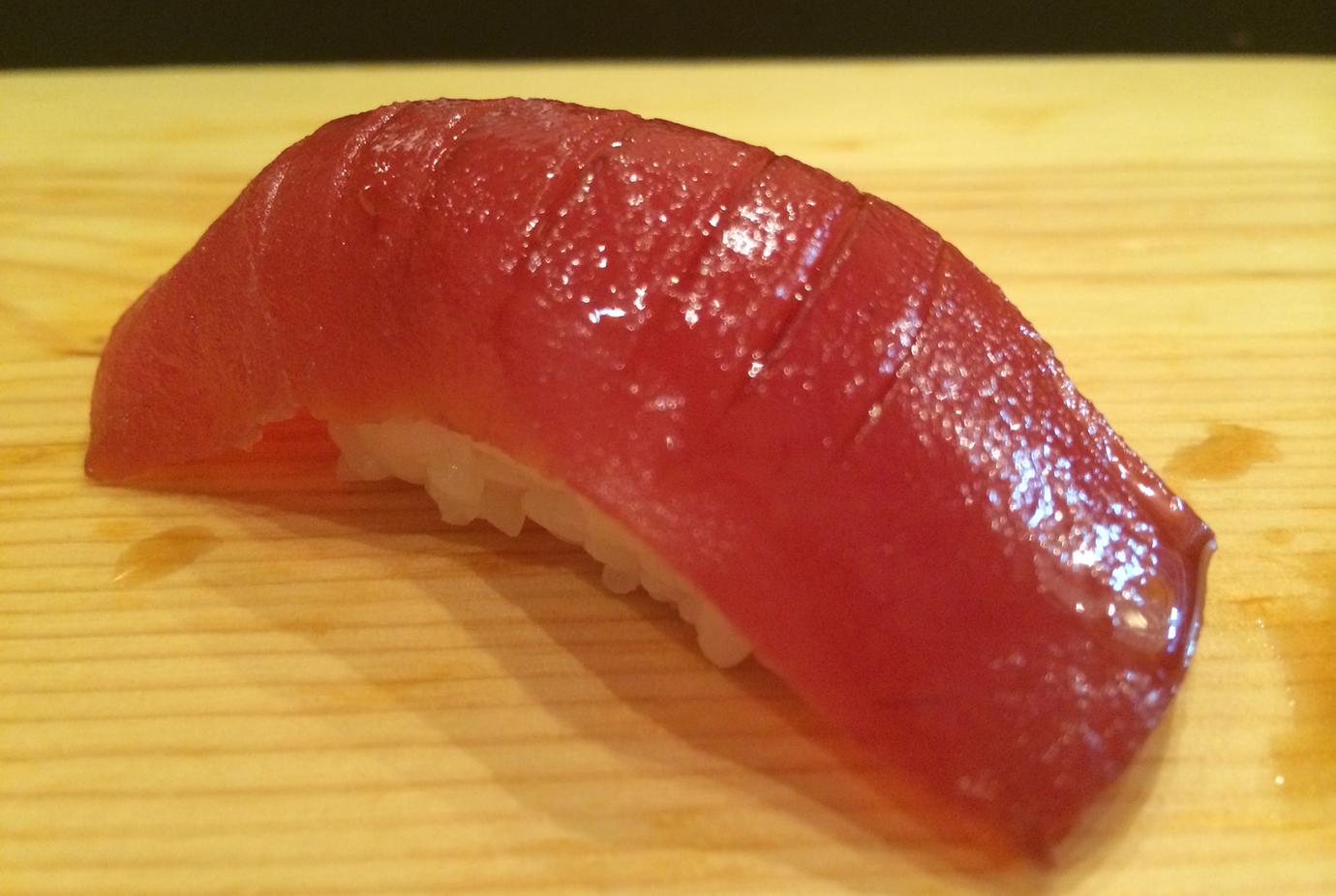 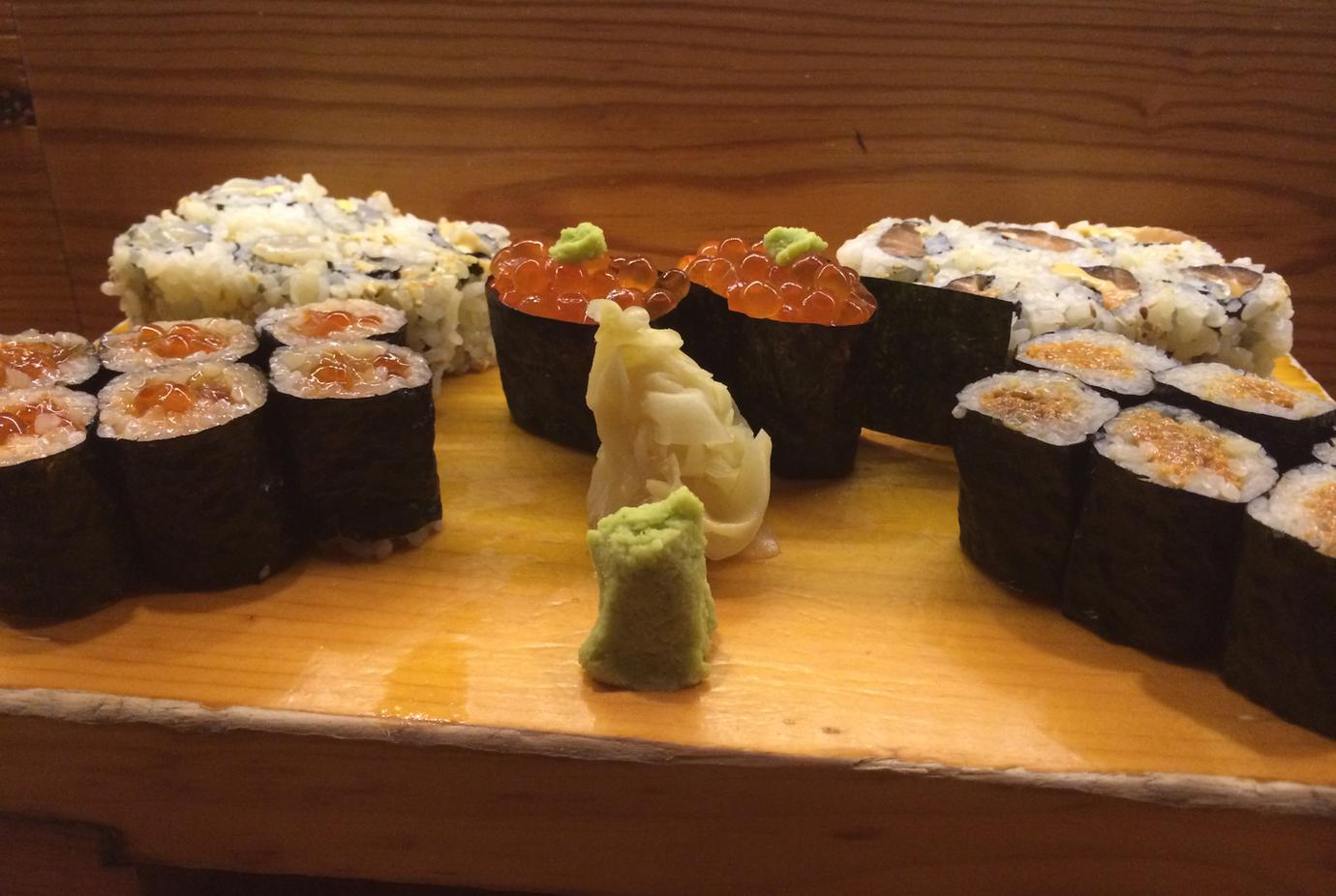 There is no doubt that part of really enjoying Sushi involves periodically strapping yourself in to the proverbial seat, biting the proverbial bullet, and splurging on Omakase at some incredibly expensive (and awesome) restaurants. But another part - the part that maintains the interest in the few months while your bank account replenishes - requires having a place in your neighborhood that serves fresh fish at reasonable prices, and where a reservation at 12:01 AM the  month before isn't necessary. For me, that place is Marumi - and it's just a bonus that it happens to rival some of the best places in New York when it comes to quality.

The Food is *spoiler alert* phenomenal. As I've stated time and time again, having a menu that changes daily is a sign of freshness. The $3.00 Clear Soup  is made fresh and might be the most aromatic broth I've ever smelled. On certain days the "Sushi Deluxe" (10 pieces of chef's choice nigiri somehow for $25) will have Toro and Uni. On other days, Akagai and Anago. To be honest, I've frequently wondered how Marumi would be received if those 10 pieces were presented individually, called "Omakase", and priced at $100. I assume - for some reason, mainly NYC's adoration for the best - that the lineup in this case would be around the block. Fortunately, it isn't.

Selection of uramaki and sumaki from Marumi. Taken 2014.

A great restaurant starts with the food, sure, but it continues with the experience, with the atmosphere, with the service, and with the ambiance. Do you feel any differently eating your delicious meal at the restaurant rather than if you sat in front of your television, munching away, scrolling through your PVR? Sushi on Jones takes that to philosophy to the next level. A $50 omakase, outside, in 30  minutes, all under the watchful eye of owner/NYC sushi wunderkid David Bouhadana? You're not getting that in your living room.

An incredible atmosphere and awesome staff are great and all, but you're not paying $50 to sit outside and talk for 30 minutes. So yes, the food has to deliver. Fortunately for fans of Bouhadana - or sushi addicts in general - the omakase at Sushi on Jones delivers. Understated touches are added to enhance the fish without dominating the taste or appearance; the result are beauties like the Uni backup (that name is all mine), featuring wagyu and Uni. Sushi on Jones taps into some of what I loved about Myumi, an omakase only food truck in Miami: it blends into its surroundings, it's outdoors (duh), it's quick, and its location is inviting and bright in dark surroundings. 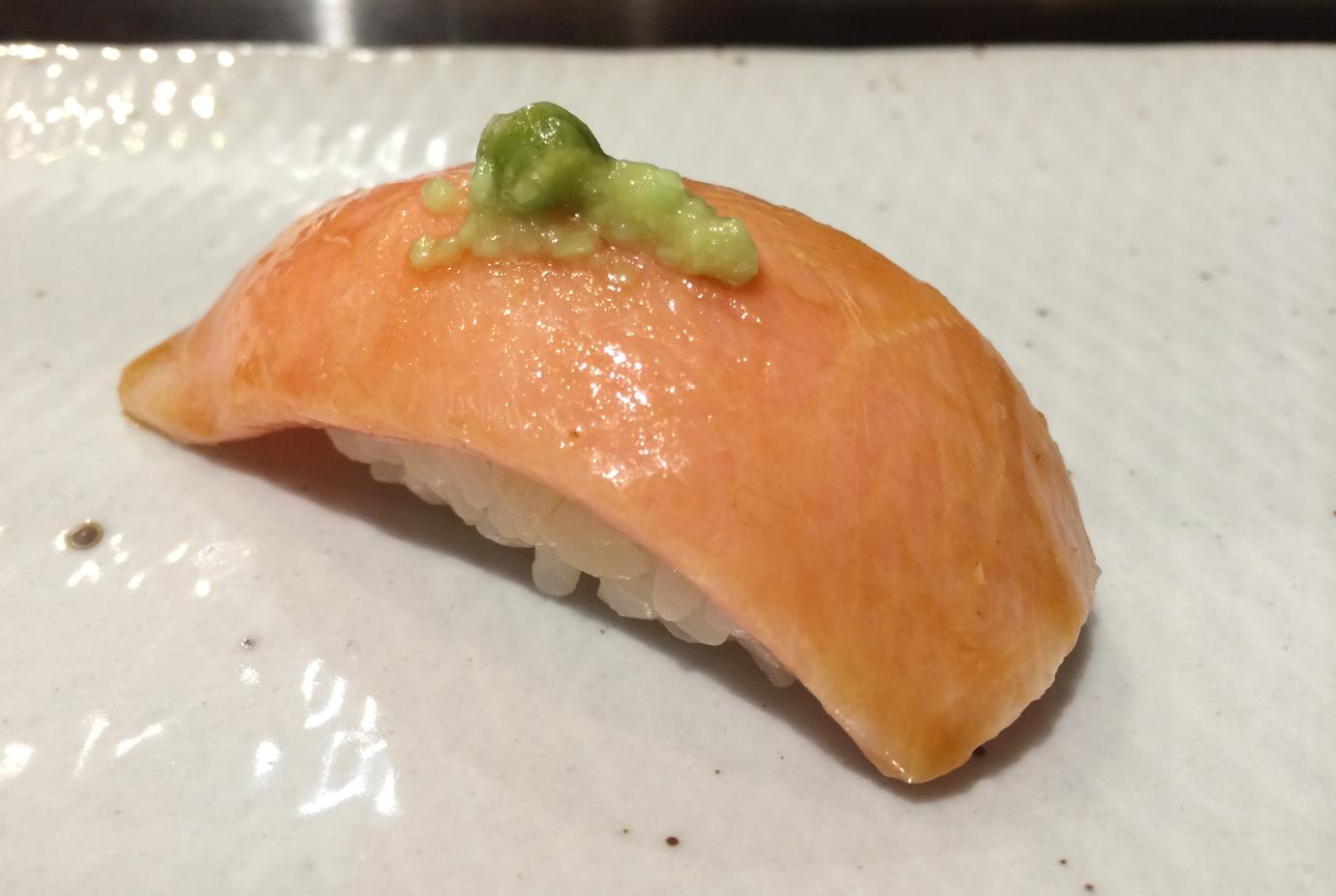 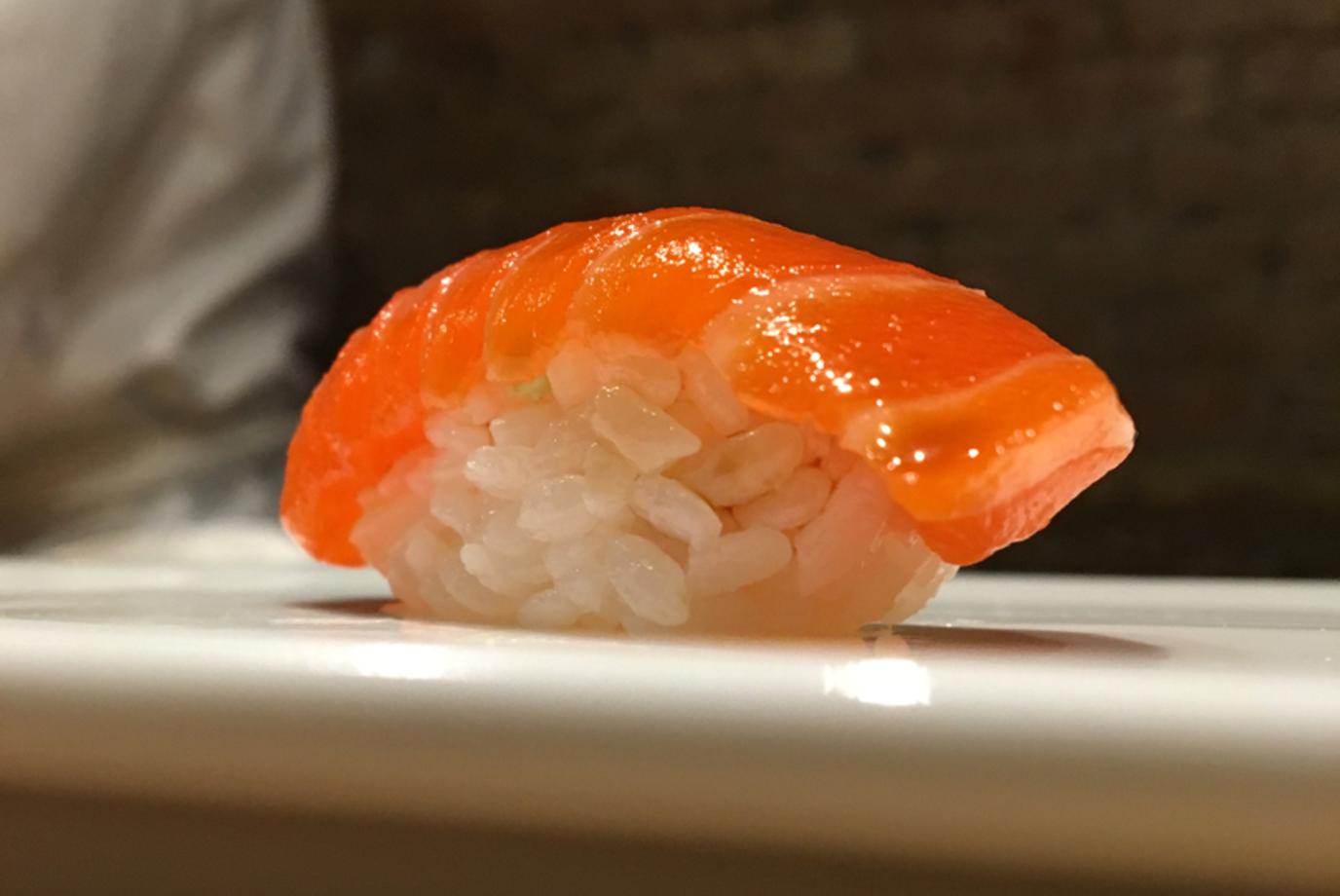 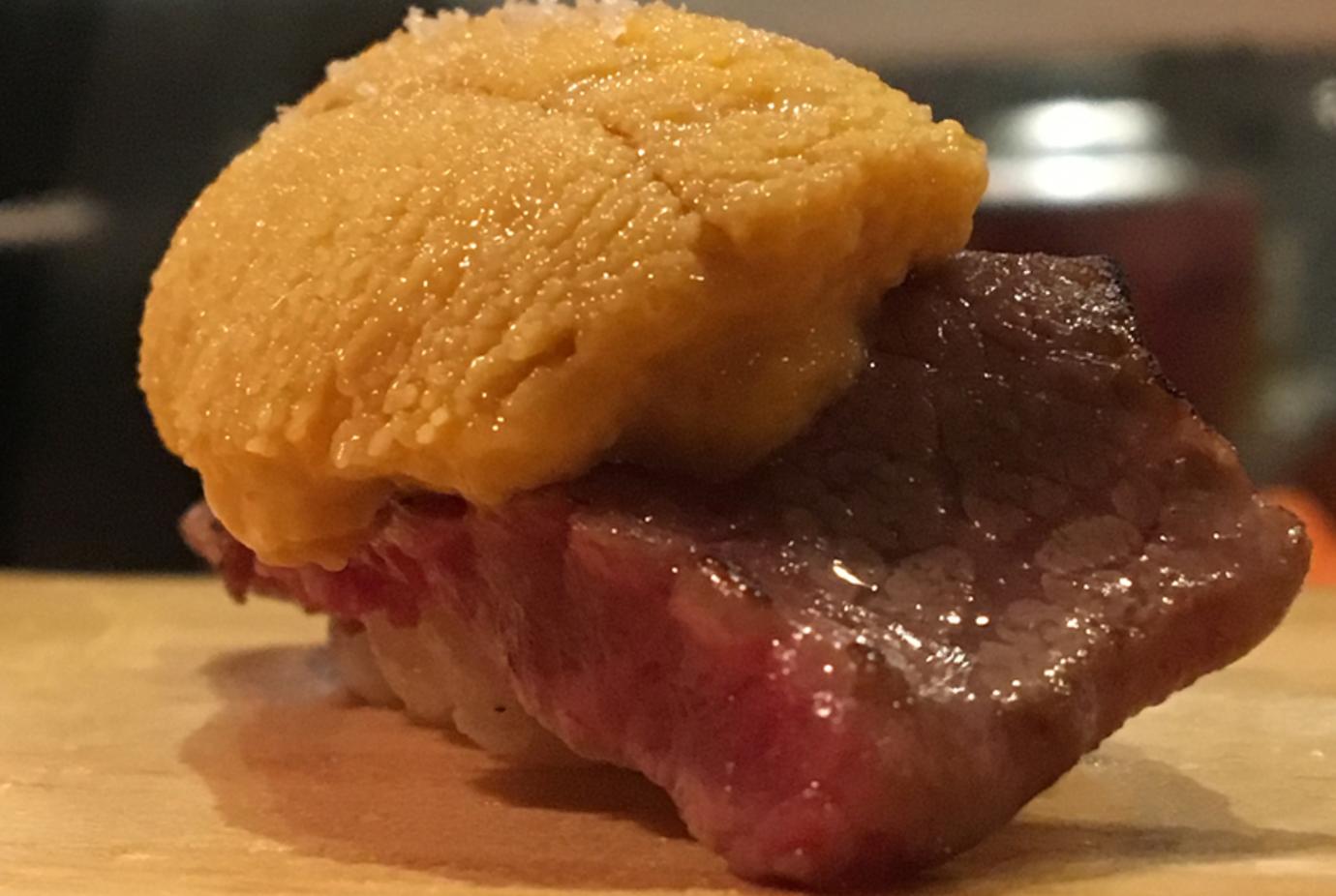 In theory, the one small downside for Katsuei is its location, situated in an area of Brooklyn that isn't exactly convenient (even to the subway). The reality however, is that its Park Slope location mean that the owners can afford to provide an outstanding sushi experience at an affordable price. The sushi wasn't the best that I've ever had (the maki left a lot to be desired), but I came away extremely impressed - or at the very least, I came away with some great pictures.

The Atmosphere is - first and foremost - sublime. The lighting is bright and inviting around the sushi bar, with no weird pastel colours on the walls that most neighborhood sushi restaurants fall victim to. There is also a somewhat large seating area, which makes eating with family and friends more than possible. The food is the other part of the equation. I ordered the omakase, which - at an extremely reasonable $45 for 10 pieces of nigiri - is as great a value as you will find in New York City.
​

At the risk of beating a drum like I'm John C. Reilly in Stepbrothers (an awesome movie by the way), New York City is - in my opinion - the best location for sushi outside of Japan. The marketplace tends to agree; Michelin isn't the only method for judging restaurants, but the highest concentration of starred sushi restaurants outside of Japan is located in New York City. And anecdotally, the most common ask I get via info@thesushilegend.com is for New York City sushi recommendations. So let this page serve as the illumination you need to guide your sushi craving forward in the Big Apple. A snapshot of my 10 recommended sushi restaurants in New York City are below, with some other highlights to the right. And at the risk of getting 23,000 comments, a disclaimer: these are not the best 10; rather, they are the ones that best cover all sushi demographics.

For a long time, Tanoshi maintained one of the most ridiculous reservation systems that I have ever heard of. Every day, a sign-up sheet was posted outside the restaurant for each of the three seatings. Simple enough, except for the fact that Tanoshi is located at 73rd and York Avenue - basically in the east river next to Manhattan. In all likelihood, the majority of people who can afford the price tag at Tanoshi were likely working during weekdays, and therefore unable to make the trek to make reservations. So Tanoshi changed their policy, allowing online reservations (with credit cards).

The Atmosphere is phenomenal. The walls for instance, are not just covered with art, but information. Maps of both Japan and the world hang behind the sushi bar (see right), and have actually been labeled with the locations of where each of the items on that day's menu were sourced from. It's a crazy cool and unique touch, except for the fact that I spent most of my meal focused on the maps, much to my girlfriend's chagrin. ​The food was a complete revelation.  Tanoshi prepares their fish edo (or edomae)  style, which is just a fancy way of describing the way the fish is prepared prior to serving. Before there was refrigeration, in order to maintain freshness, fish was often cured in vinegar/salt prior to serving with rice. As a result, when you eat at Tanoshi, I would highly recommend enjoying your food EXACTLY as it's served - that means no soy sauce added.

I actually went to Daizen alone and - despite some issues finding the hidden restaurant - felt that the set up of the restaurant and all of its menu options made it easier to relax. That's because the fish is diverse enough - and the prices low enough - that ordering on a whim is encouraged. Most people around me ordered in spurts, rather than all at once, which seemed to make it easier to keep the conversations going. Despite the fact that I went on Saturday , the restaurant was more than happy to let people spend as much time as they want at the bar.

And I enjoyed it. More specifically, I enjoyed the fish: it was fresh and unique, The chef didn't overdo the soy sauce that he applied, which not only made the nigiri taste delicious, but also look outstanding for my instagram as well (priorities...). The omakase featured ankimo, sashimi, 10 pieces of nigiri, an uni gunkan (nori wrapped around the sushi in a circle) and a uncut maki. I didn't catch the name of the sushi chef, but his knife skills were also absolutely on point.