Besides the sheer volume of sushi, Teisui's value comes from the quality of the neta (e.g. toppings to nigiri) and where they come from. As much smarter people than me like to point out, ​not everything has to come directly from Japan.  And with some fish and shellfish, like the exquisite torched salmon from Norway and the sweet and juicy Botan Ebi (spot prawn) from Canada, Teisui smartly sources from better waters. .

But if eating Japanese ingredients is what you're after, this is the most reasonable option besides Uogashi (updated review to come) in New York City. Tuna (both Chu Toro pictured below and O Toro pictured above), come from Chime prefecture, on the west side of Shikoku island. Kinmedai, which isn't blowtorched for a refreshing change, is from ​Kochi on the same island. The oily unagi is from Kagoshima on Kyushu, and tthe Wagyu (pictured up top) is from Miyazaki on Kyushu as well. 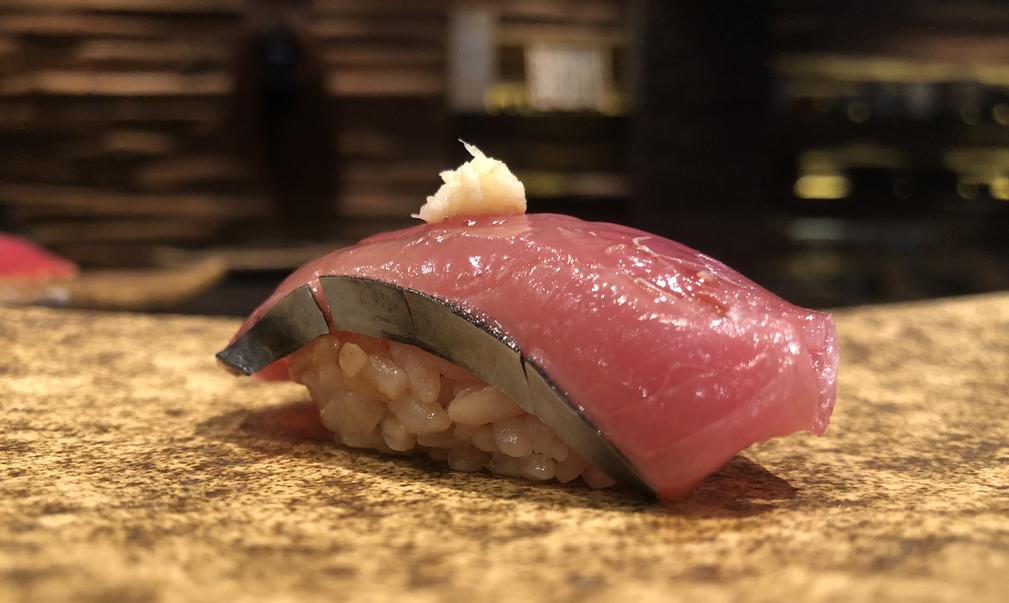 It didn't take long to get the Umami tingles. The Katsuo (bonito) pictured above was the guilty party, its pale appearance belying a fattier texture and oilier taste. Spring is one of the two traditional seasons for Katsuo in Japan because of migration patterns, and so this beauty from Chiba Prefecture was placed ever so gently in front of me, it's little hat of ginger right on top. Also wearing the paste beanie was the Sayori, the Japanese needlefish (also called halfbeak) that's virtually translucent and - to me - one of the prettiest of the hikari-mono ("shiny fish"), regardless of which of the many presentation variations that the chef chooses.

While we're on the subject, the use of ginger was a highlight. Taguchi-san does a lot during the meal, but he still finds the time to slice ginger for those of us (hand up) that run low from too much palate cleansing.
​ 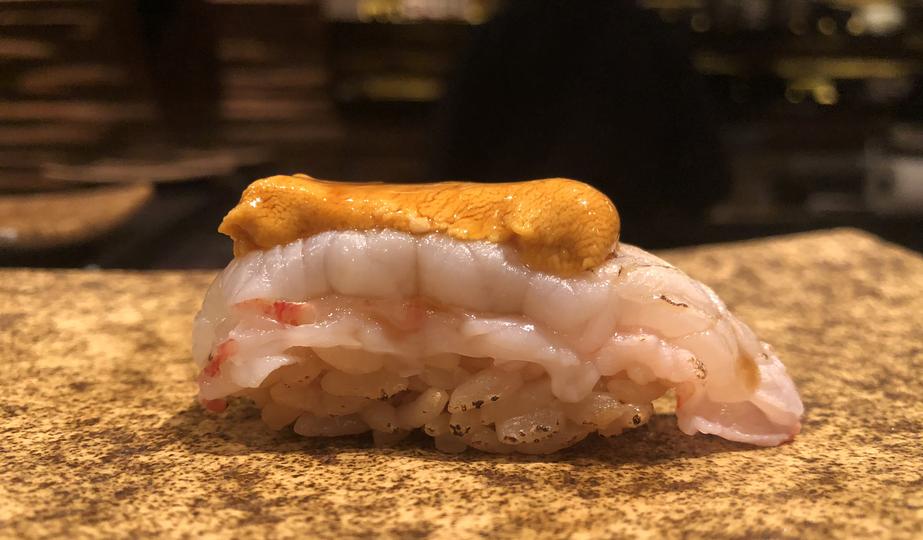 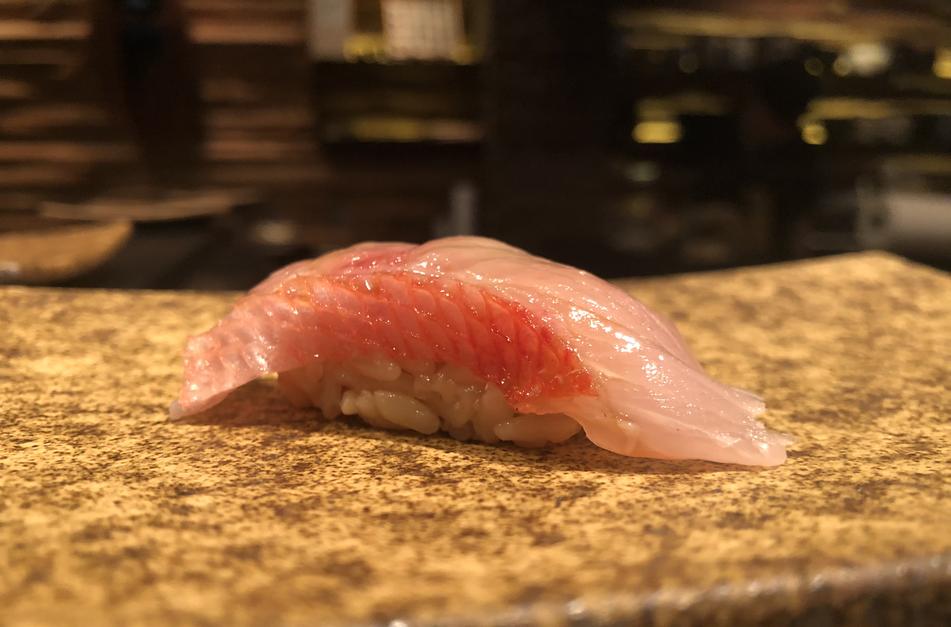 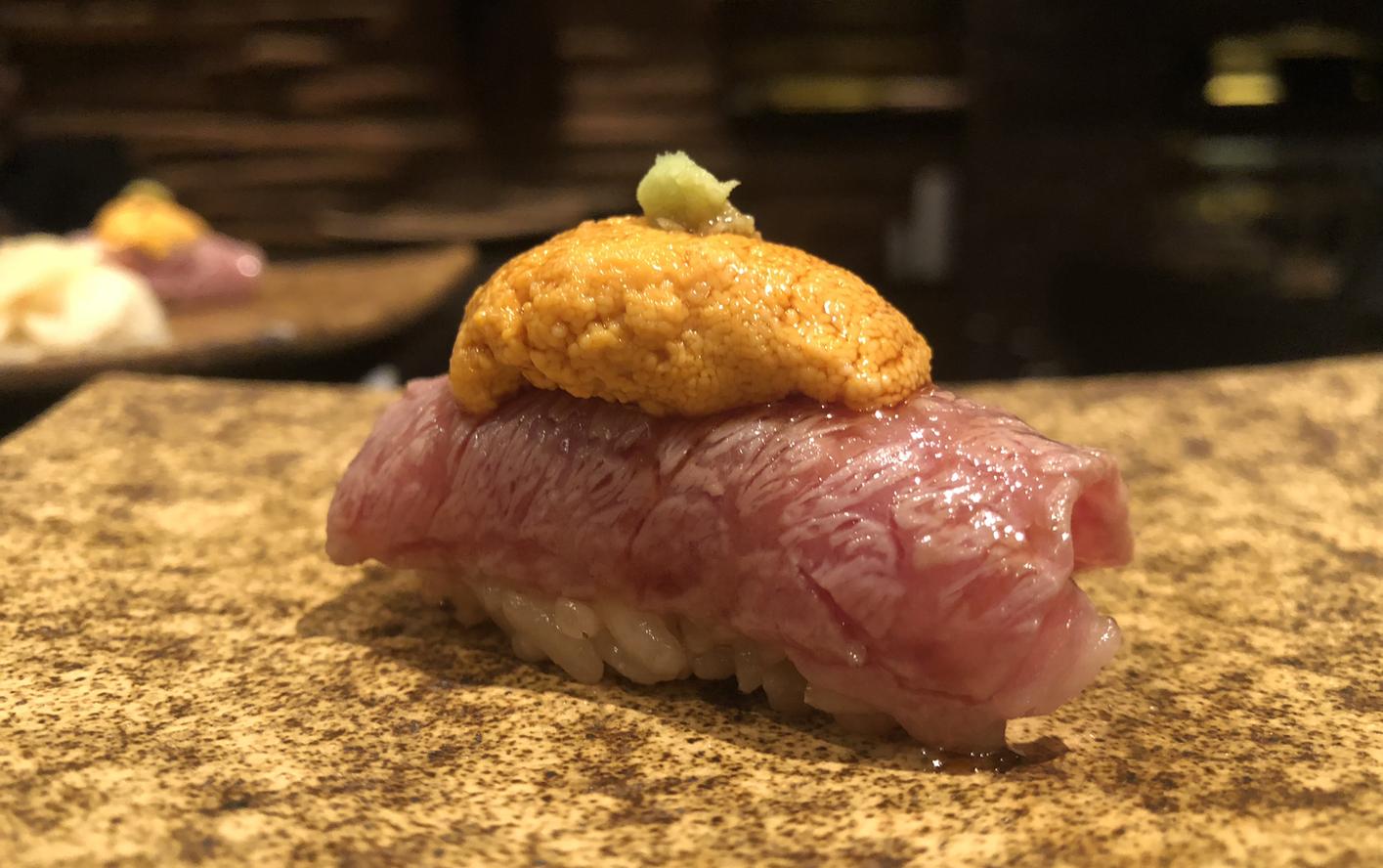 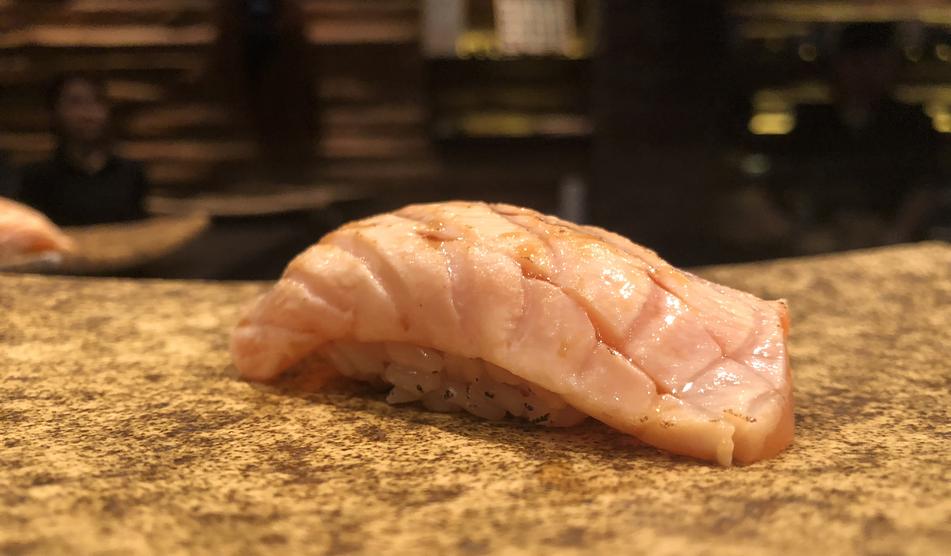 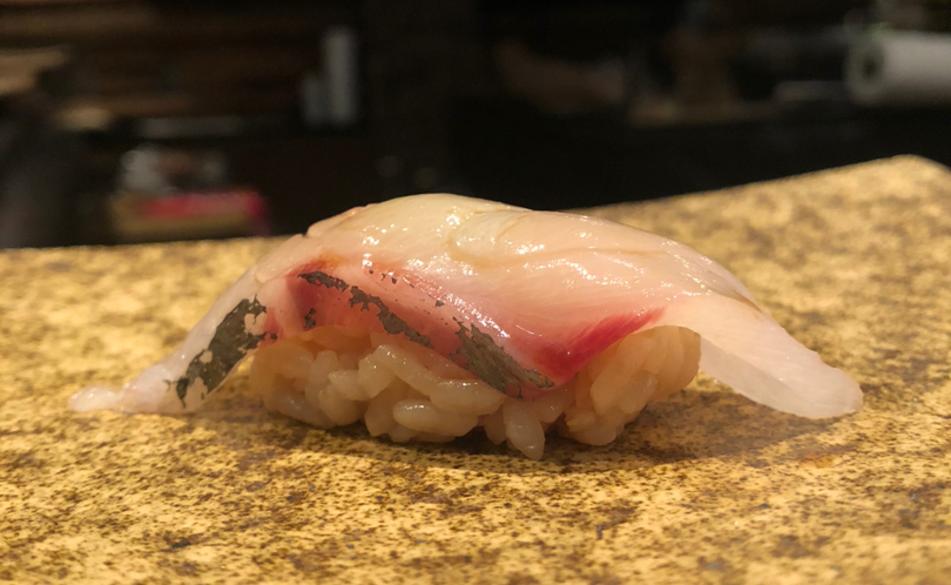 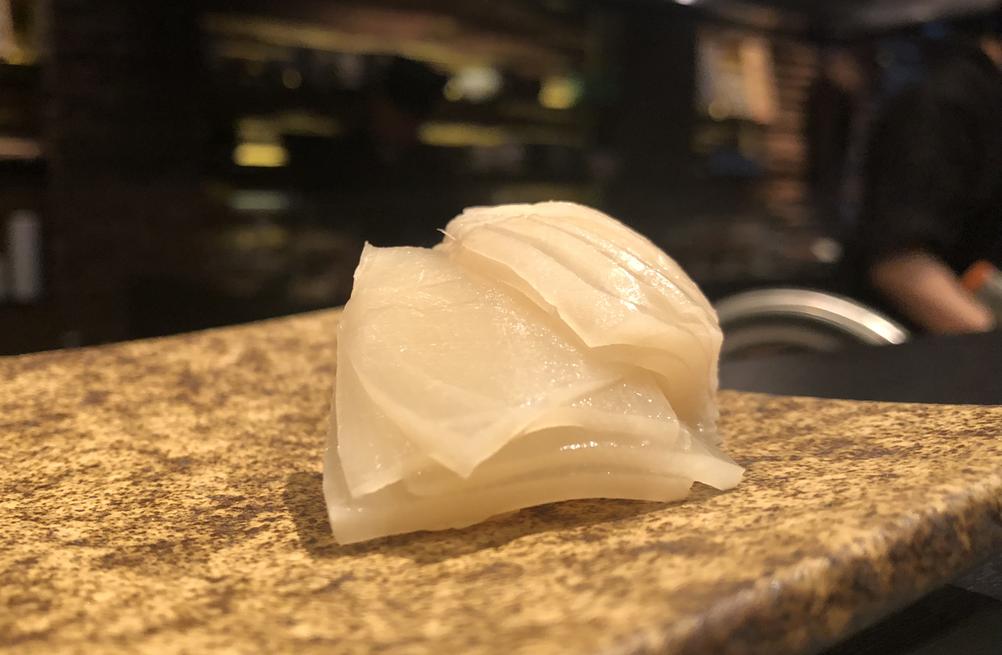 Rather than start by walking through the sushi like I usually do, I'd rather talk about the preamble. For anyone sitting at the sushi counter, they're given a paper menu of not just the omakase options, but also the neta they'll be served and where it's from. It's a rare touch that I'm sure will be a welcome one for many. While some itamae will share those details verbally, it's always struck me as unfair that some customers expect that to be the norm. After all, if you truly want to leave it to them - as the word omakase intrinsically implies - then trusting them with the particulars in the manner they see fit only seems fair.

And on the off chance you're unfamiliar with the finer points of my culinary addiction, the menu gives you that context as well. There's the background of the word omakase, a handy guide for eating sushi...there's even an explanation for the darker tint to the rice (it's the akazu, or red rice vinegar). What might be even more enticing to the neophyte is the price. Dinner has three options, currently peaking at a borderline ridiculous $85 for 15 pieces of nigiri and a temaki . Lunch strays cheaper: $22 entry level for 5 pieces of nigiri, sashimi and salad.​

All that would be meaningless if the shari (rice) - which holds an equal hand in this dance of dragons (shout out book readers)-  wasn't flavourful, but of course it is. That's not just because of Taguchi-san and his team's technique, but also the use of Akazu, a red vinegar that tints the rice but also - to me (and I'm sure any of you) - surfaces the flavour from the rice. I've written about Akazu before - check out my review of Uotora -  but one of my favourite tidbits is that it's made from leftover nihonshu (sake) leaves (or leafs if you're a fan of hockey's most unfortunate franchise like I am).

The bottom line is that at a entry level omakase - perhaps someone new to the world of good sushi who thinks that Sugarfish is the top level - Omakase by Teisui delivers. 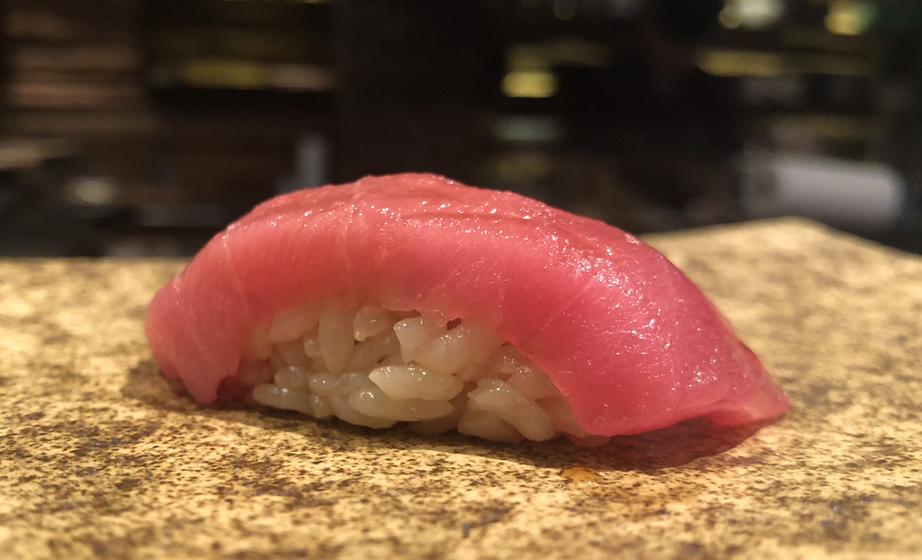 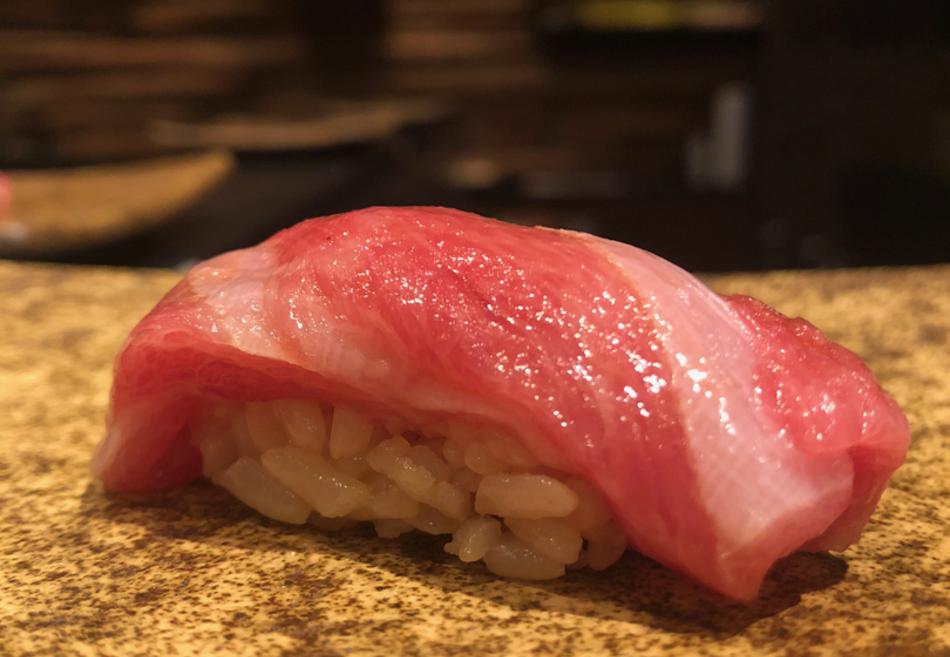 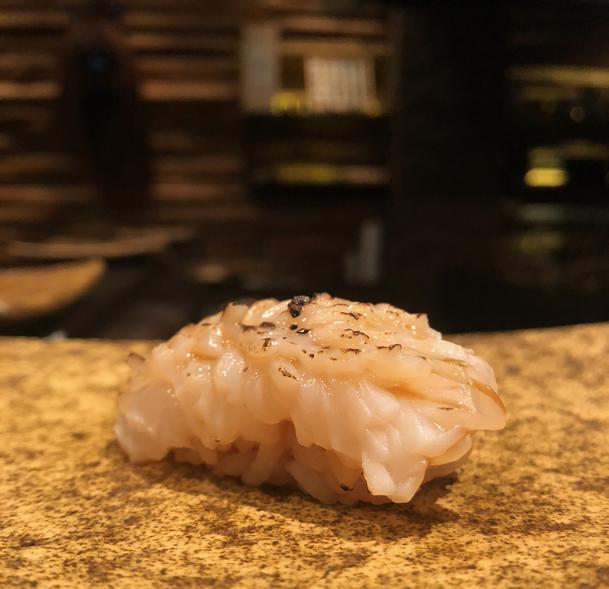 I t didn't take much to get me excited about Omakase by Teisui. The second I heard it was located in the Nomad area of New York City, a notorious black hole of good sushi that really just features low-effort KazuNori, tourist beacon Haru and zillion dollar Noda, my ears perked up like Bugs Bunny's. Teisui deserves credit for not only plugging that gap with - spoiler alert - great sushi at a reasonable price, but for also reading the market. Previously, it was Teisui, an Izakaya. Same owners, same place. New York City is littered with the corpses of restaurants that stubbornly stuck to their original vision; Omakase by Teisui's ​owners, who also own a Ryokan in Akita, Japan, smartly pivoted in October, 2018.

The renewed focus on sushi is led by Taguchi Kazunobu, a veteran of the scene in both Japan and stateside. Taguchi-san presides over the L shaped counter and a few tables with the help of two chefs, a dedicated management team and knowledgeable servers. The restaurant functions far more effectively than you'd expect for a 7 month old sushiya - each nigiri in our omakase comes like clockwork - but of course, it really isn't a seven month old restaurant, is it? 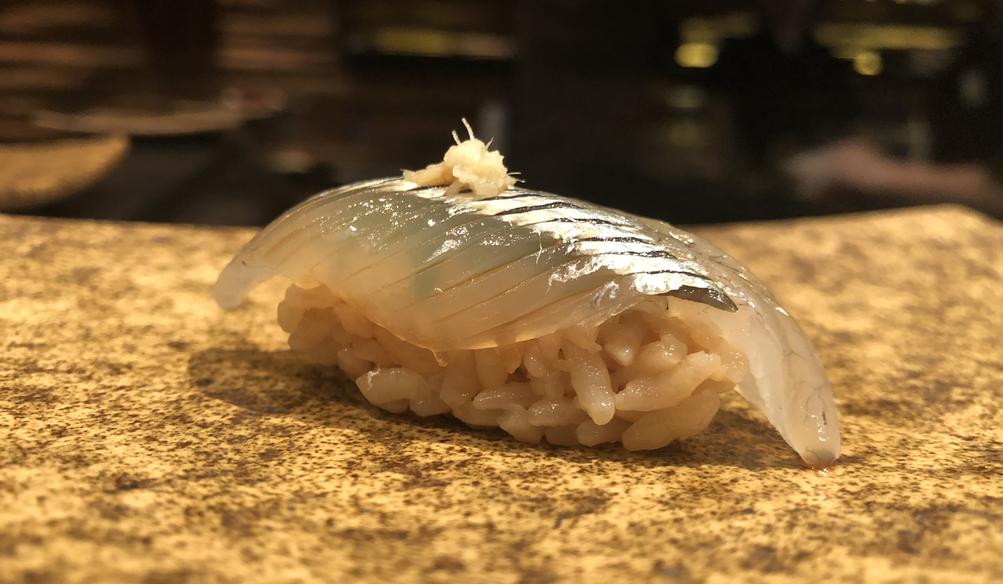 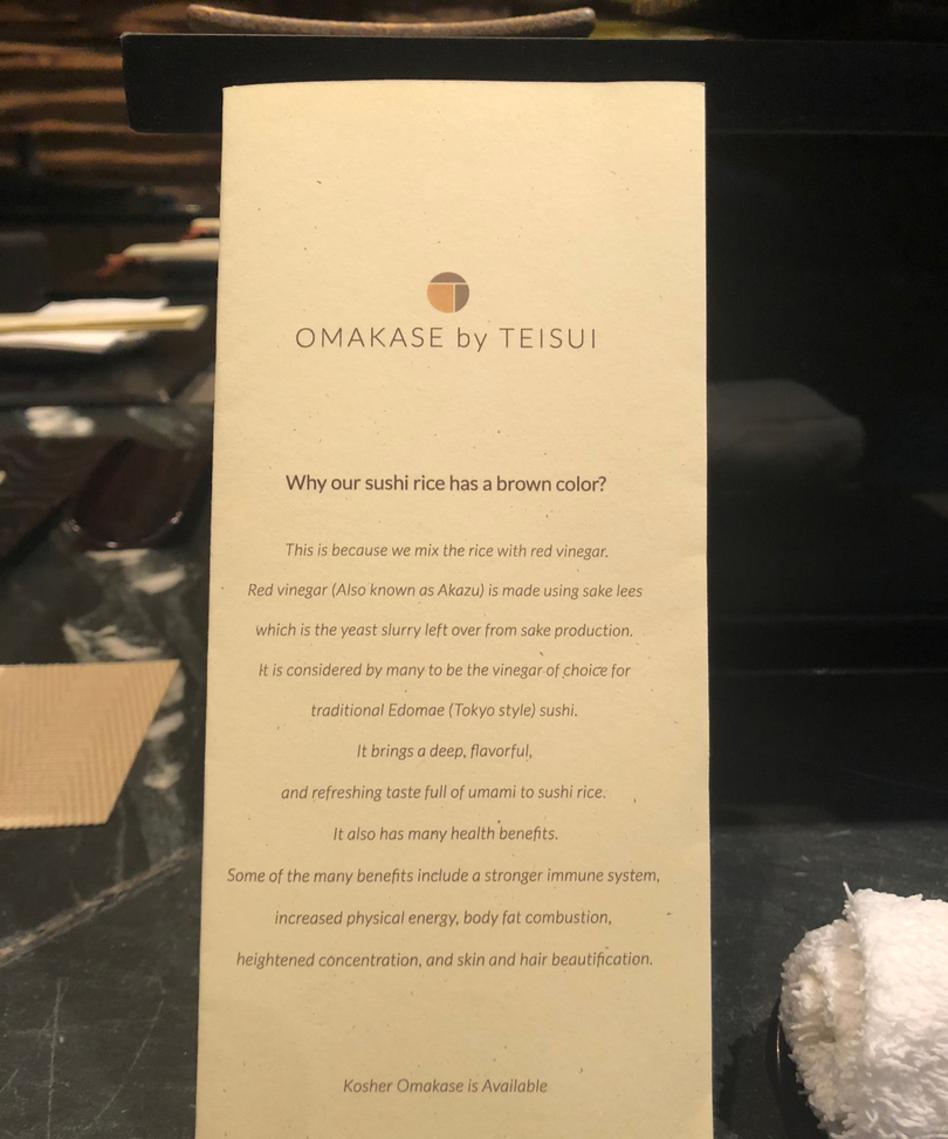