If you've read the Sushi Essentials part of my blog, you'll know that, in my opinion, one of the hallmarks of a good sushiya is having seafood on offer that is not part of the omakase. Omakase Yume meets that bar with flying colours, and yes that's a mixed metaphor but it's my blog and my rules. There's no mystery to the whole affair, either; at your seat is a menu of your meal and the additional neta if you're so inclined. The extra options aren't at your basic local joint, but if you're feeling adventurous, give them a shot. I tried the Kohada (Shad) and Tairagai (pen shell), the latter of which particularly excited me. Though nominally standard at traditional edomae-style sushiya, even at the monsters in Manhattan, you don't often see ​Tairagai. I'm told it's served all year round, but particularly favoured in the fall, which is when Omakase Yume served it. Give it a try. 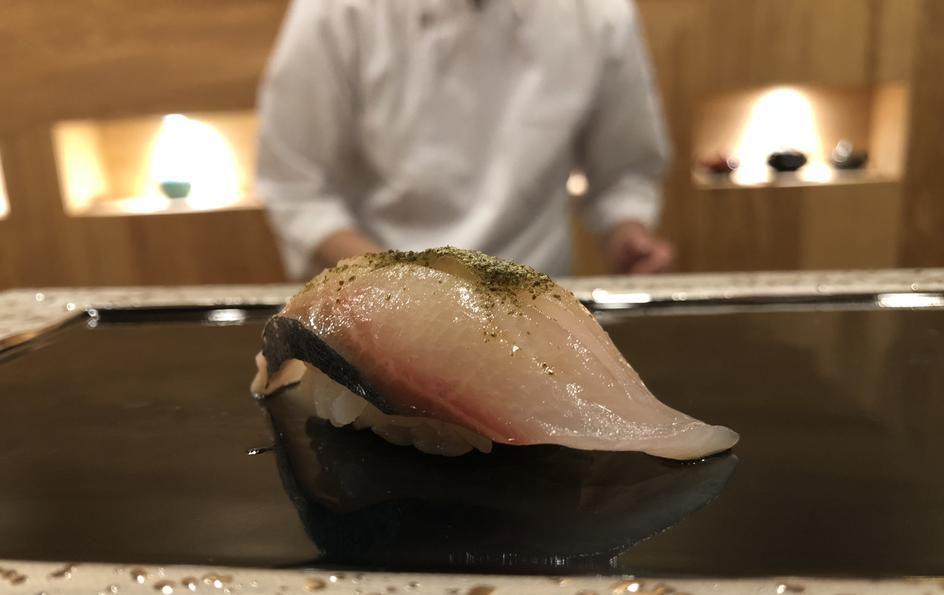 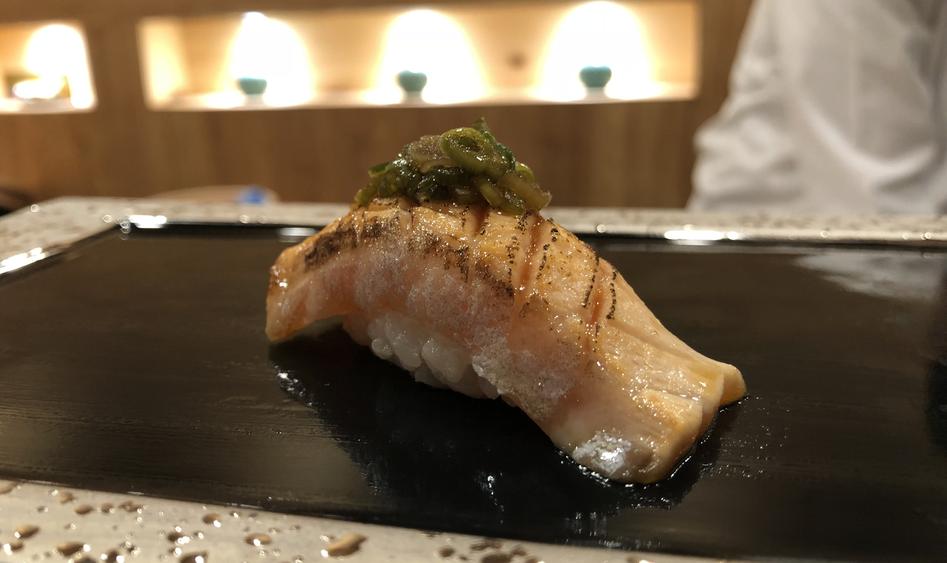 After a brief sashimi course, the nigiri courses begin with two shiromi (white-fleshed) fish: Hirame (which was categorized as fluke here, but also can be called flounder) and Madai​ (Red Snapper). Hirame doesn't get much pub, and you may have had off-brand versions at other places, but it's supposed to be one of those fish that shows a chef's waza (his technique). That's because there's a thin layer of fat that's right underneath the skin. Let's just say that if it was me slicing, I'd probably take that entire layer off and somehow burn the place down for good measure. Check out how oily it is in the picture above. That's the sign of quality.
​ 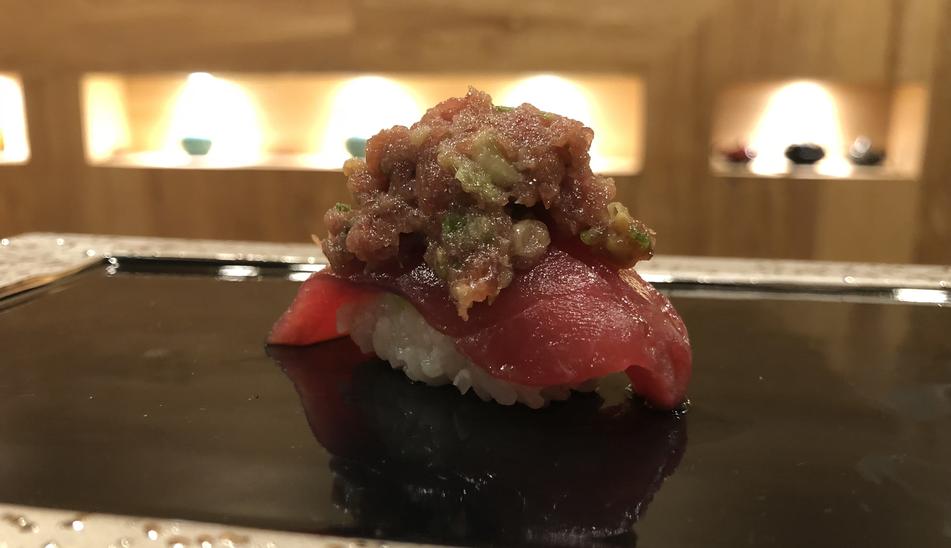 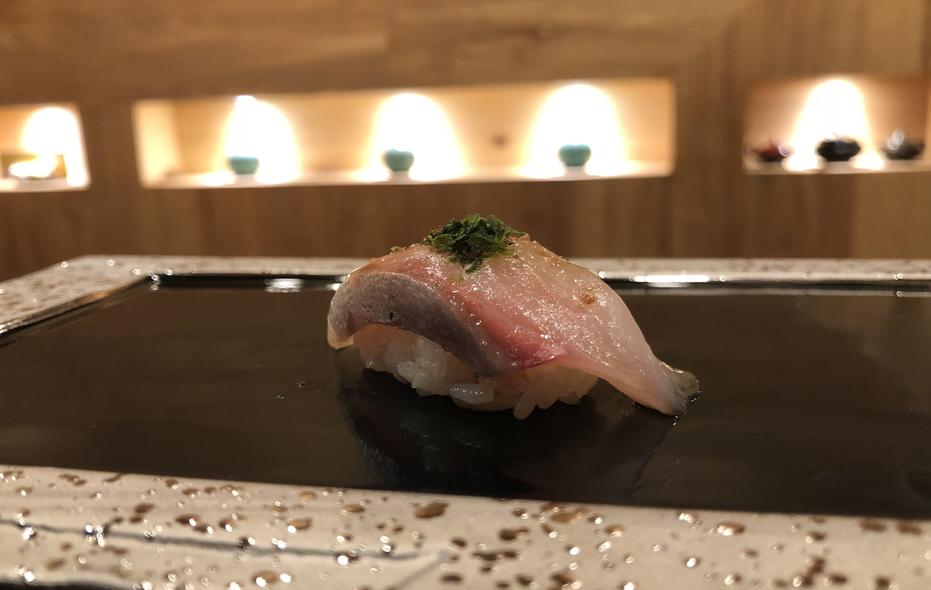 It's also worth praising how restrained - but still skilled! - that Park is with one of the most controversial tools in sushi, the blowtorch. Pictured below is ​Salmon Aburi, scored and torched so lightly that while the inviting grill marks still remain, if you look closely you can see that the inside of the scores are that beautiful raw pink. It's the same story with the Ika (squid) pictured underneath, which Park has cut with edges that curl up like a pool noodle when torched. I promise both tasted as good as they look.

Omakase Yume is a beautiful, quaint is sushiya, the kind of restaurant that, paired with a bit of BYOB sake, warms your soul on the all too frequent windy Chicago nights. Because of it's tight space, you'll likely find yourself chatting with your fellow diners or Park himself, which always makes an experiential meal more enjoyable. And who knows, you may even feel comfortable enough to spread the gospel that using fingers, not chopsticks, is the more effective way to eat nigiri, a fact of which the other 6 people at our meal were blissfully unaware. No correction was coming from the staff themselves, who are about as friendly as you'll find in any restaurant across the United States. 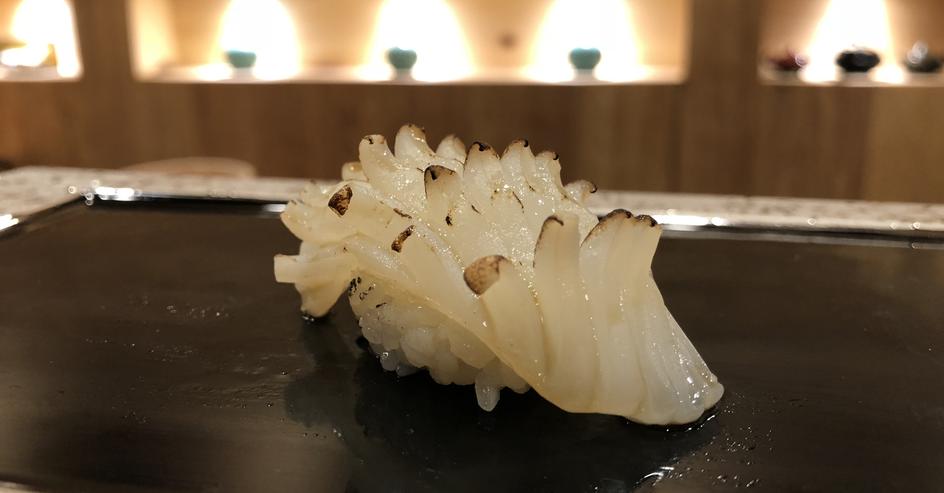 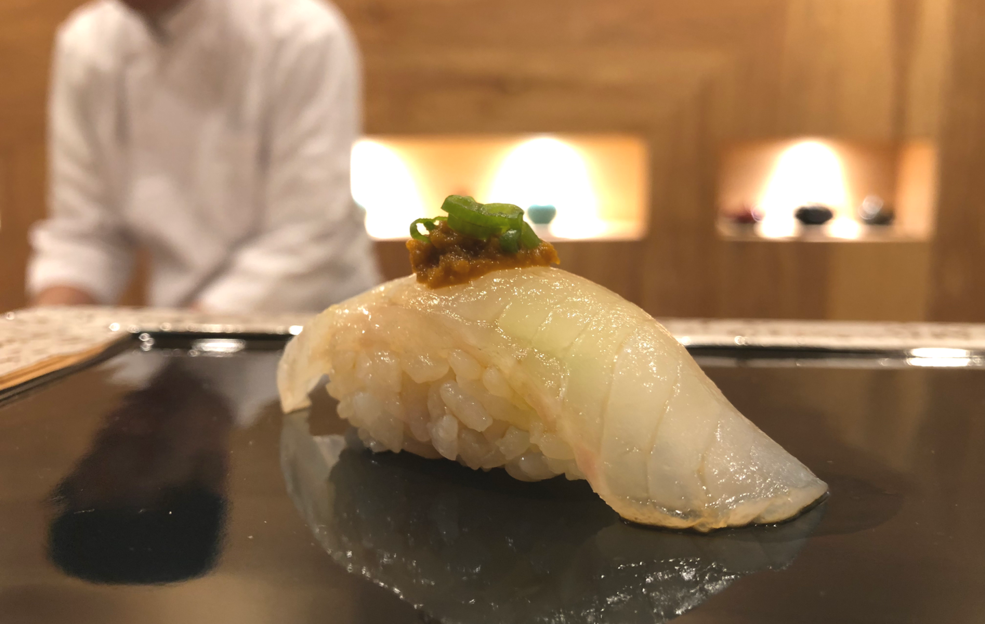 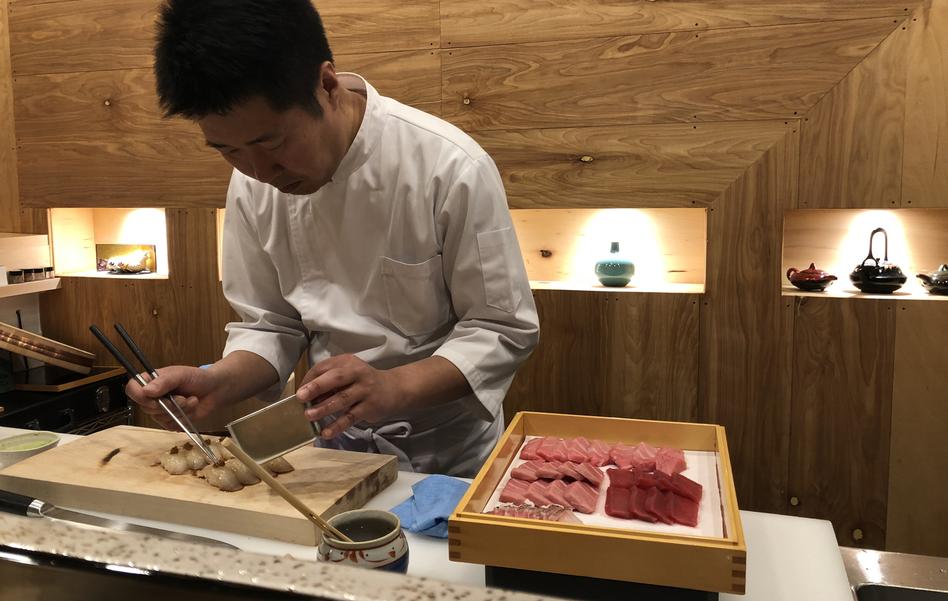 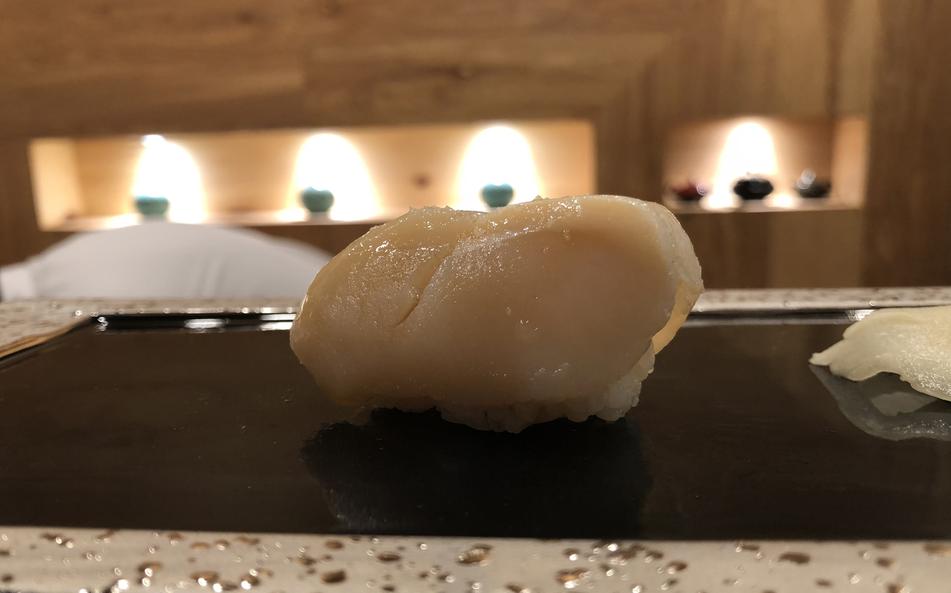 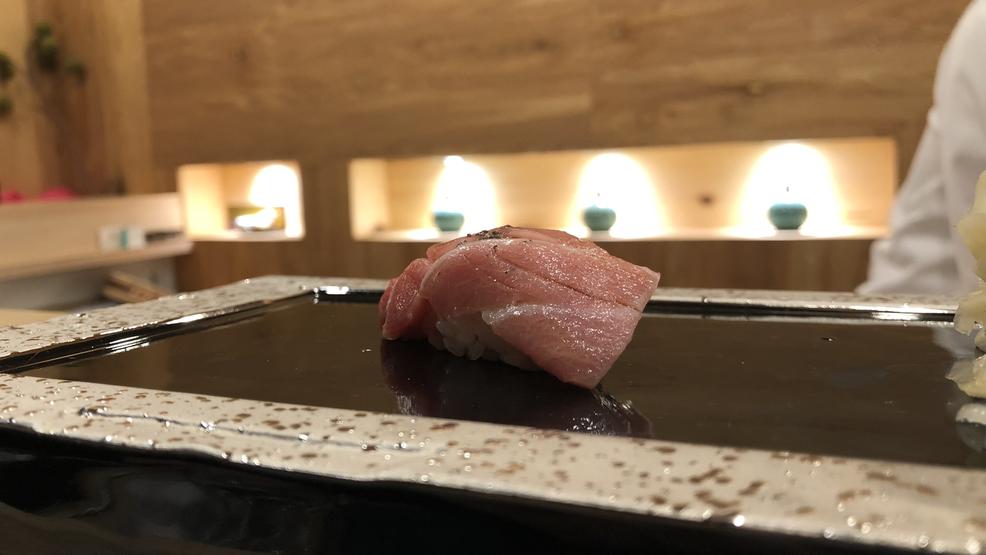 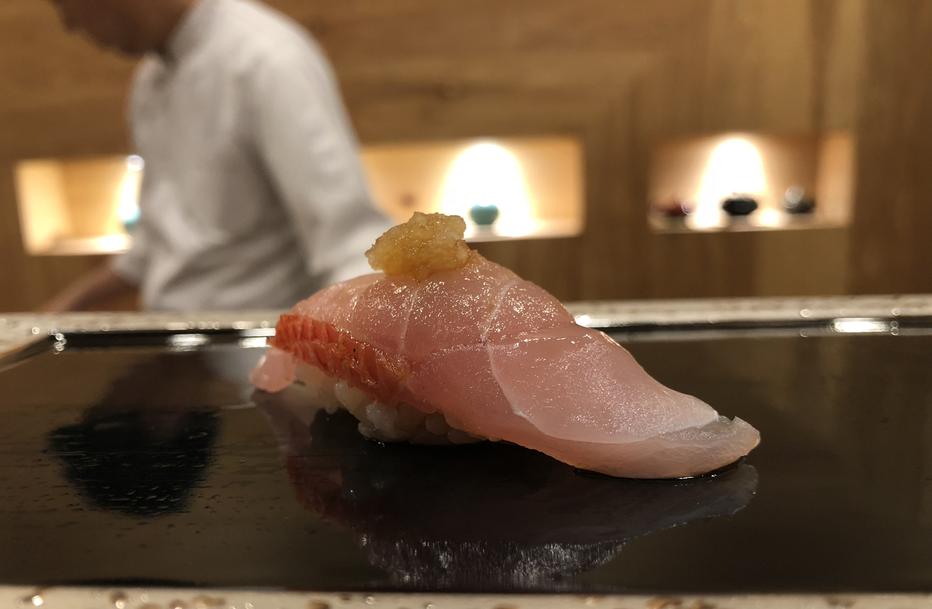 I love sushi. Did you all know that? It's an addiction, but it's not an insular love. Rather than keeping it to myself, it's a love that I prefer to share with others. That's part of the reason that I write, attempt video production and post pictures on instagram (@thesushilegend), all for the grand total of $0 (props to me).  Like most of life's worthwhile endeavors, sushi is more fun when more people are able to participate.

So it's been a pretty big shame that a city of 2.7 million residents has been lacking the strong quality of sushiya that other similarly sized North American cities have. ​Kai Zen​, a modern-slanted restaurant, is excellent, and Toro Sushi, a more traditional spot that isn't breaking the bank, has long been one of my favourites when I'm visiting. But beyond that, nothing of consequence (info@thesushilegend.com if you feel differently). So if you're in the Windy City and looking to satisfy a craving for a high-quality, nigiri--by-nigiri omakase, your only option beyond staring at this blog was taking a flight. Until now. Enter: ​Omakase Yume (dun dun dun). 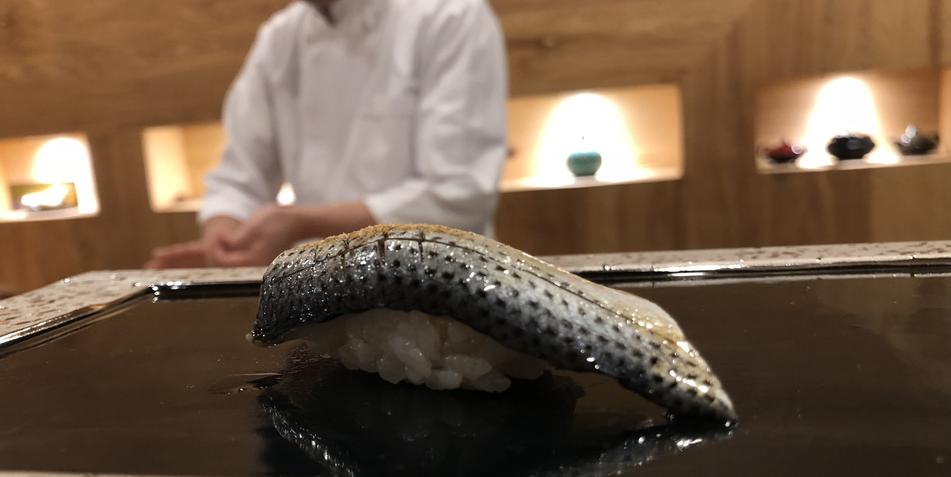 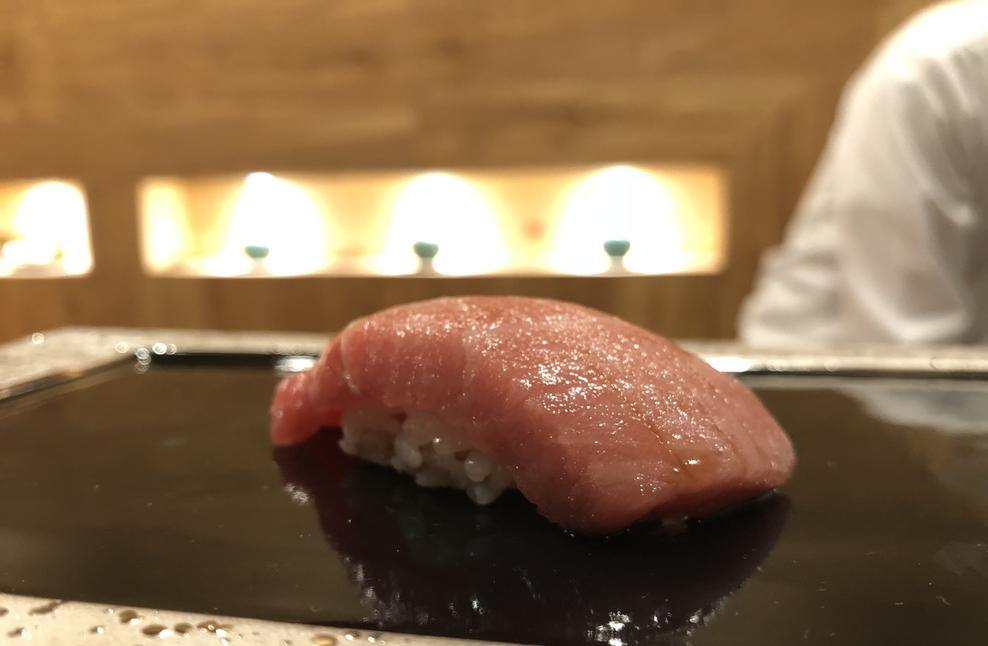 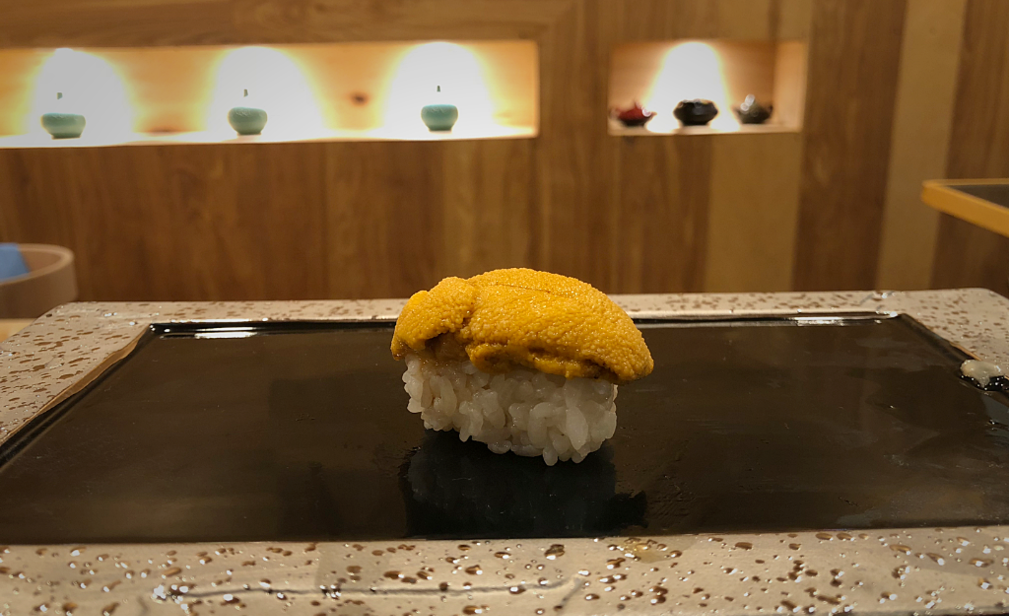 Park is no stranger to the delicacies of fish. He grew up in Busan, a beautiful seaside city in the Republic of Korea that is on my shortlist of places to visit next. He's been in Chicago for almost two decades, but Omakase Yume is his first edomae-style, omakase-only sushiya. Judging by the response the restaurant has received so far - reservations are extremely difficult - and the fact that Chicago for some reason lags behind other similarly sized cities for "higher-end" sushi (investors, get at me), I have a feeling that Park has created a behemoth with Omakase Yume. Well worth a visit. Omakase Yume can be found on a non-descript, highwayed section of the West Loop, an area that I know zero about except that apparently it's located west of a loop. Arriving, the first thing I noticed is the restaurant's size, which falls somewhere between "first New York City apartment" and United Airlines' new seating configuration.  To combat that issue, Omakase Yumesmartly has its customers wait outside while they turn over from the previous seating. With just 8 counter seats and 3 seatings a night, that process doesn't take long, but it helps build the anticipation, as does the giant window giving everyone waiting a clear view into the cozy, wood-filled space.

Once inside, Omakase Yume is familial. All 8 customers are seated closely together around the "L" shaped counter, and everyone is given the same 16 course (11 nigiri), $120 omakase. With that tight  environment, you'll likely begin talking and conversing with complete strangers. The other 6 diners at our seating were super friendly, so I was willing to overlook their use of chopsticks for every piece of ​nigiri.  The sushiya is also familial quite literally: Sangtae Park presides behind the counter and his wife Kate supervises the cooked dishes in the kitchen and hosts and serves all the patrons.

View of the counter

The tuna progression comes next, which includes Akami (below), Chu Toro and O Toro (above). Park's  Akami (lean tuna) is interesting. Regardless of the cut - whether it be the fattier collar and belly, or leaner dorsal area - you likely won't see anything added when Tuna is served as ​Neta on your standard nigiri. So to see a heaping of negitoro on top of the akami was surprising, especially given how good the negitoro was by itself (I cheated and took a little off the top). My view? I prefer separating strong tastes. Let's just say I've seen enough o-toro/uni/caviar/ikura combos to last a lifetime. You'll never convince me those tastes are magnified - rather than restricted - by combining them.