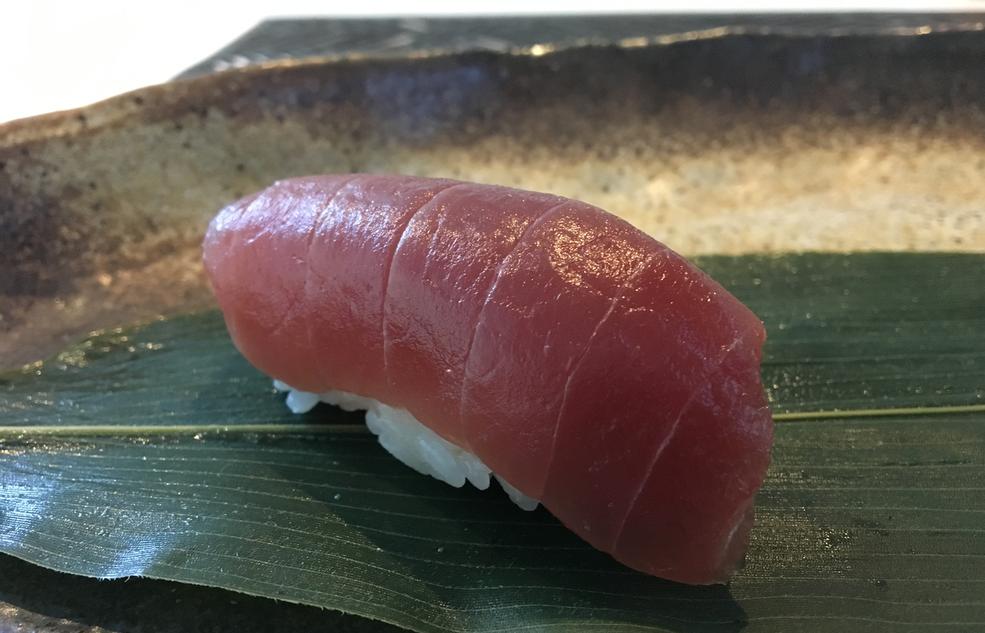 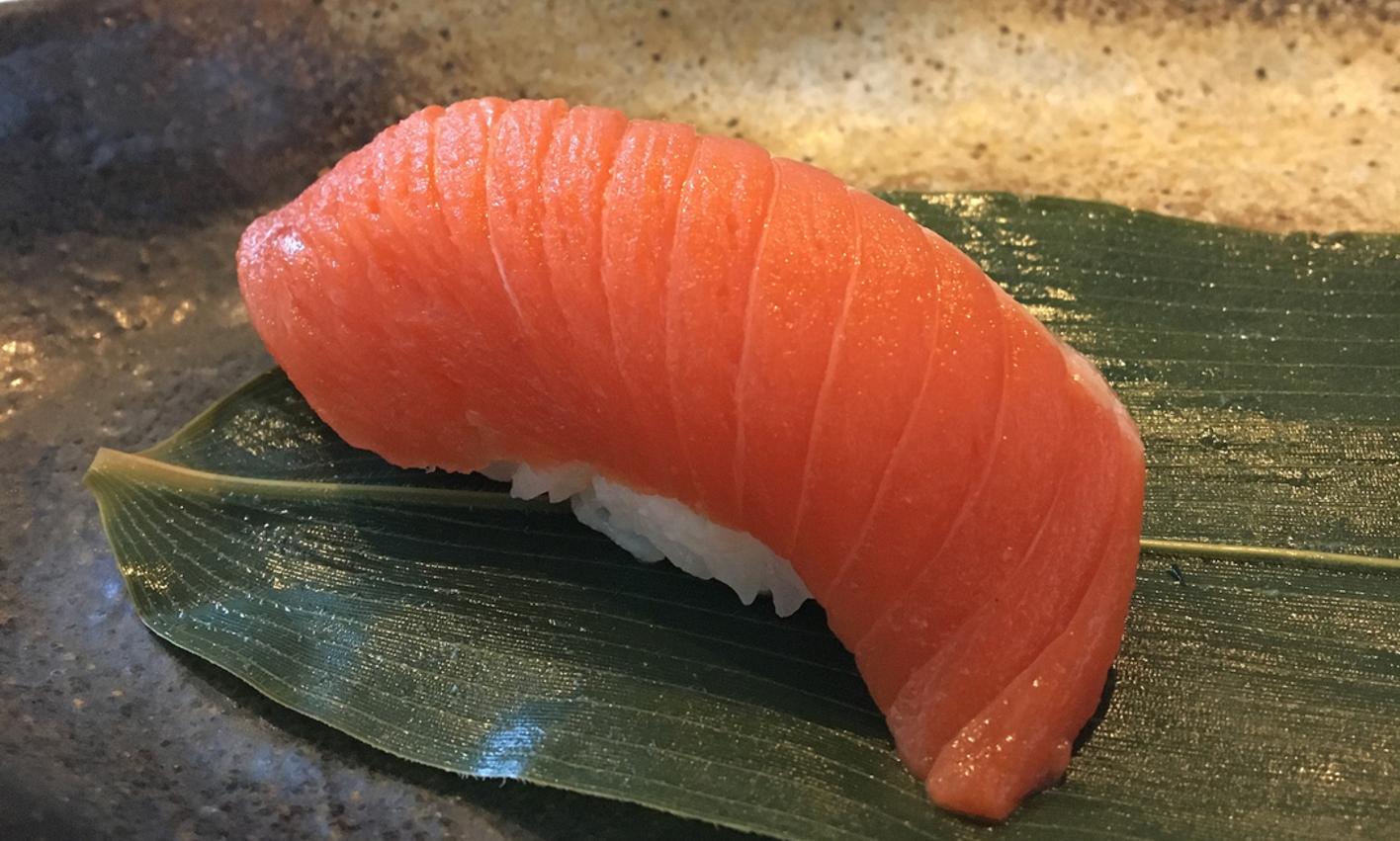 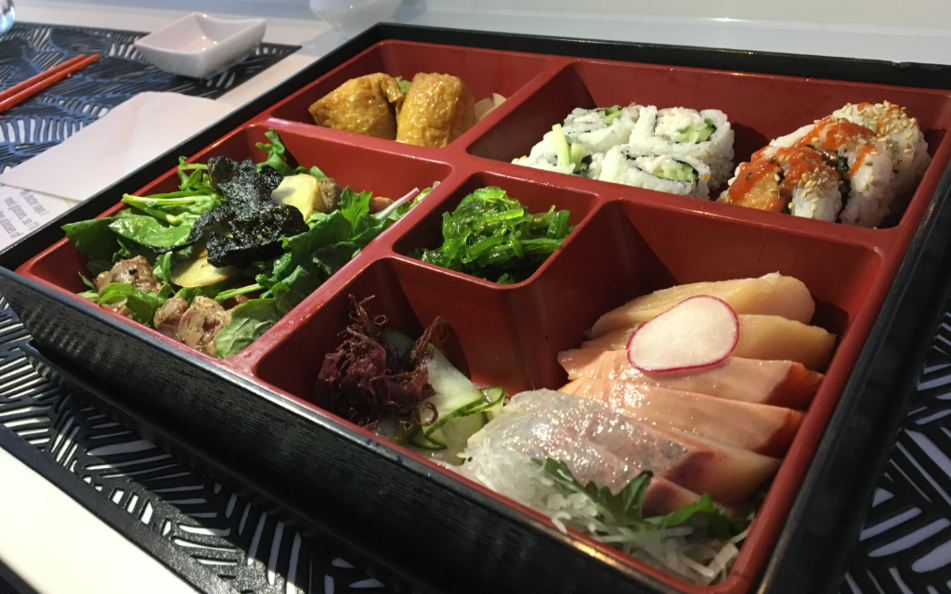 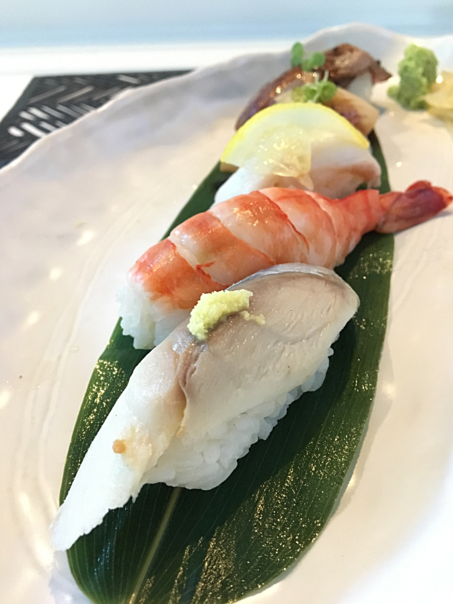 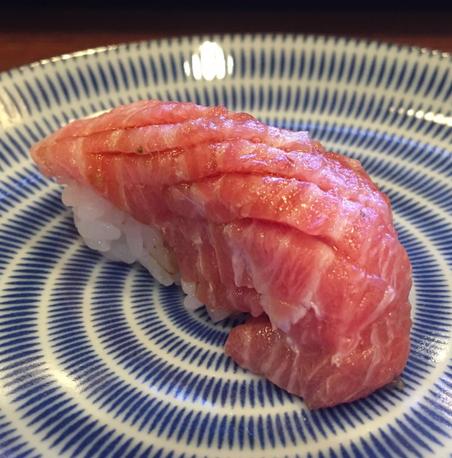 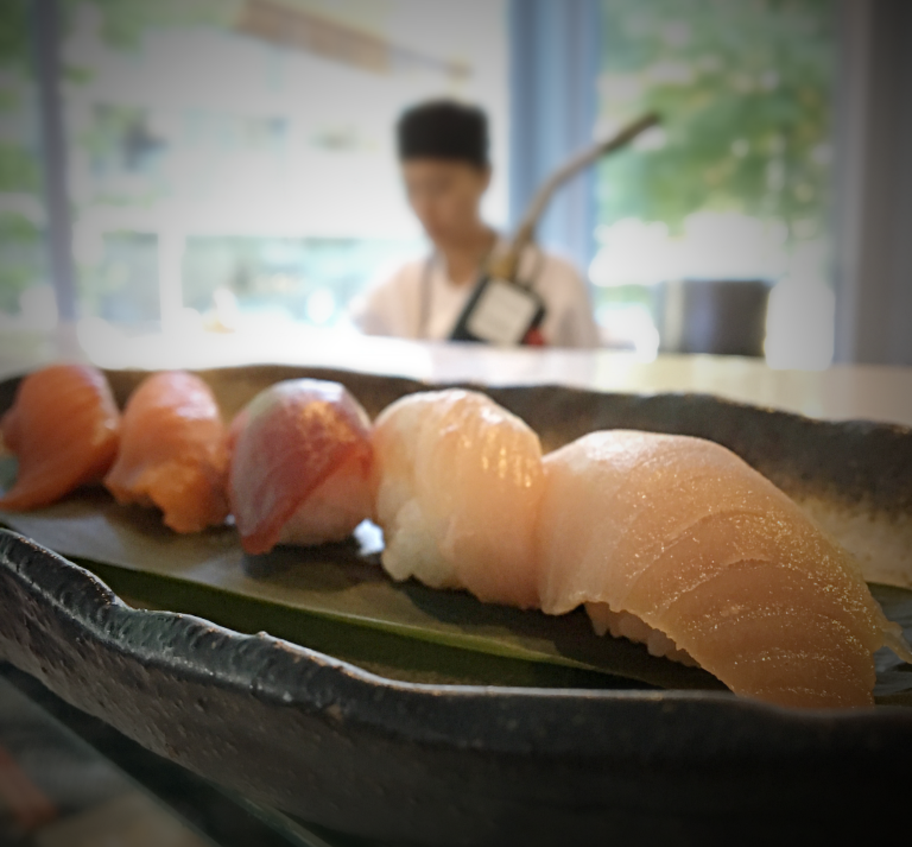 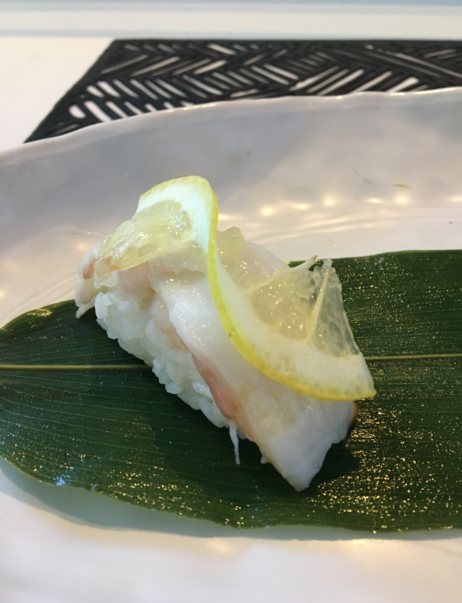 The answer to that question depends on your definition of "good". For some, "edible" is the benchmark. If that happens to be you, congratulations, Raw Bar is right up your alley. But for others like me (and I suspect, many of you), the sushi has to be prepared technically well, with proper ingredients and ultimately worthy of a second visit. By that measure, it does not hit the bar (as always, pun completely intended). Take the Bento Box that Mrs. Sushi Legend ordered (pictured below). Three pieces of spicy salmon maki, dipped in some bizarre red sauce. A California roll, I think. Some lettuce. All forgettable. Credit though, where it's due: the sashimi, especially the hamachi, were fat cuts of quality. ​

As for yours truly, I ordered the lunch Omakase, which is actually an excellent deal, especially for a hotel restaurant. The omakase features 10 pieces of nigiri (served in 2 platters of 5 pieces), an appetizer, miso soup at the beginning and temaki at the end. Ocean Wise stipulations mean that Raw is limited in the fish it can serve, but that's not a death knell. B.C. salmon, fresh from basically around the corner and pictured at the top of this blog, is outstanding. But everything else leaves something to be desired. Saba (mackerel) sits like a piece of plywood on top of its shari. And Ebi, objectively terrible on its best day, was as advertised.

But the most baffling part of the day was the decision to top Neta - in this case, Shima Aji (striped jack) - with a lemon slice. Not lemon zest, which is a somewhat common profile raiser. No, no- a lemon slice. Clearly I'm not going to eat raw lemon, and I'm fairly skeptical a thin lemon slice even provides any additional flavour. So what's the point? The chef could have literally dunked it in lemonade and I wouldn't have been so perturbed.

​We also should probably have a family discussion about the rice. I ate my lunch a mere 30 minutes after the bar opened, and yet somehow the rice was already crusty and hard. Ever had rice that's been sitting in a fridge overnight? Yeah, that's the one.

H ere's a strong opinion: eating sushi on the road is far more aggravating than you might expect. For one, choosing the right spot is harder when you virtually zero local knowledge. And sure, there are the usual resources, but Yelp (brutal for searching), TripAdvisor (inflated scores) and food blogs (can't help the competition) are far from ideal. And time is limited; you don't get unlimited cracks at the Piñata (you can have that metaphor for free) and you certainly don't have the time to be gallivanting (big word alert) all over the city. So when my wife and I visited Vancouver this past September, we circled the Lobby Sushi Bar at our hotel, the Fairmont Pacific Rim as a necessary, and frankly, convenient destination.

Raw Bar's pride and joy is its Ocean Wise certification, which is prominently displayed behind the sushi counter, on the menu and probably on the fish itself if I had looked hard enough. Ocean Wise is a Vancouver-based seafood program that works with restaurants, markets and suppliers to identify ocean-friendly seafood choices. Historical sushi traditions aside, sustainably fishing is a cause that I know is important to everyone who loves fish as much as I do. As the first sushiya in Vancouver to have its entire menu Ocean Wise approved, Raw Bar is certainly doing its part. But is the sushi any good? 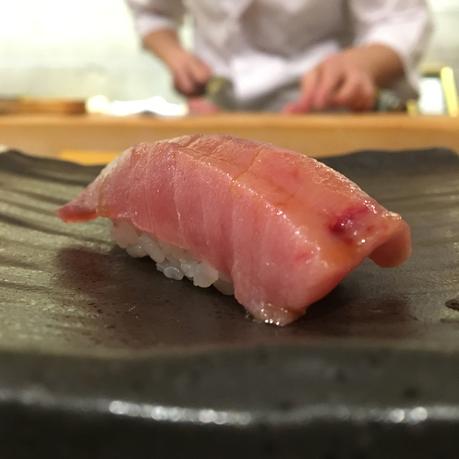 The saving grace for Raw Bar is the incredible location at the back of the lobby bar of the Fairmont Pacific Rim. During the day, people gather to experience the relaxed atmosphere and phenomenal views of Downtown Vancouver. At night, the lobby bar turns into a vibrant lounge, complete with live music, local Vancouverites, entertaining travelers and excellent cocktails. Raw Bar is a component of that atmosphere, so if you are less a sushi snob and more a normal human, you might be willing to overlook Raw Bar's limitations. We also found the service mostly attentive to our questions and water glasses, the two hallmarks of any effective waitstaff.

More importantly, behind the bar sits a beautiful flat screen, perfect for occupying the attention of the single traveller. When we visited, ​Casino Royale was on, a tour de force approximately 974 times better than the most recent James Bond flick, Spectre. So even though I wasn't a single traveller, my attention was absolutely occupied (sorry honey!). Alas, if you're looking for an incredible sushi experience in Vancouver, worthy of the city's proximity to the Pacific Ocean and Japan, Tetsu is a far better option.