What follows next is sashimi moriawase (see above), an assortment of raw fish that I don't see as often as I'd like on New York City sushiya​ menus. It's a complex course; think of the difficulty to not only perfectly prepare or slice each tane, but present it artfully when fish - alive or not - naturally just wants to flop around. Bluefin O Toro from Spain, Ama Ebi from Chile and Hotate​ from parts unknown (shout out AB) all delicious and presided over by the uncooked head of the Sweet Shrimp (more on that later). 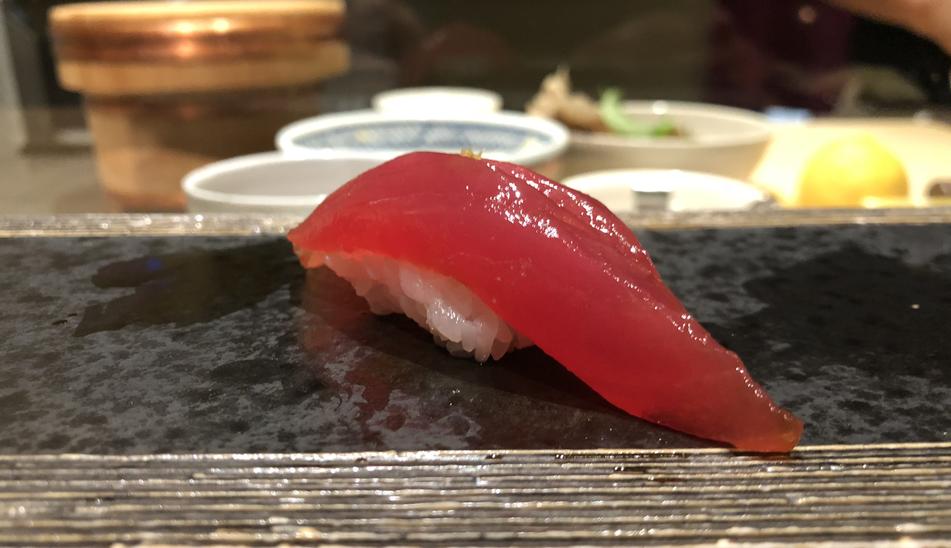 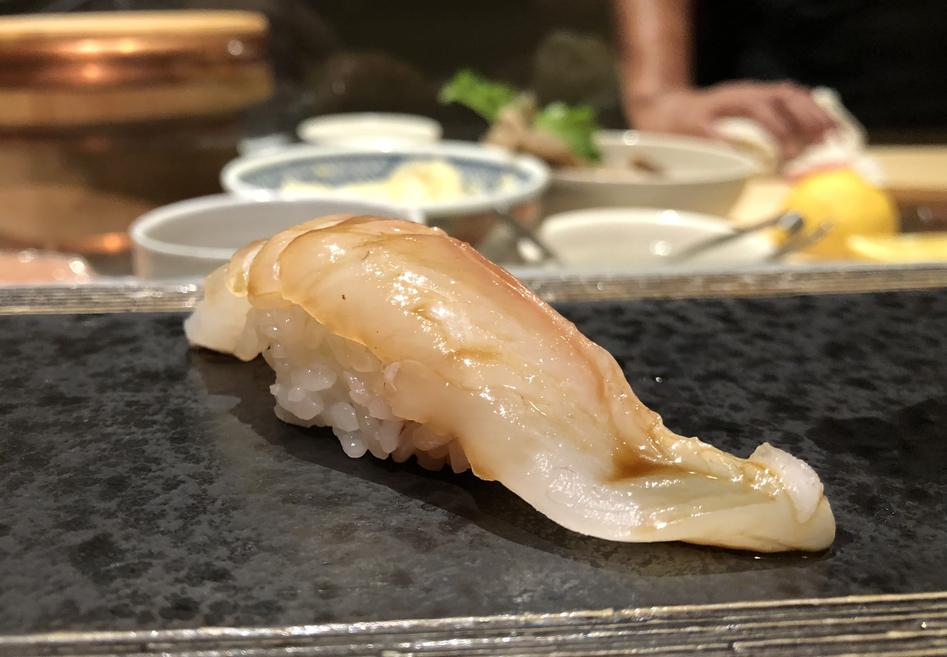 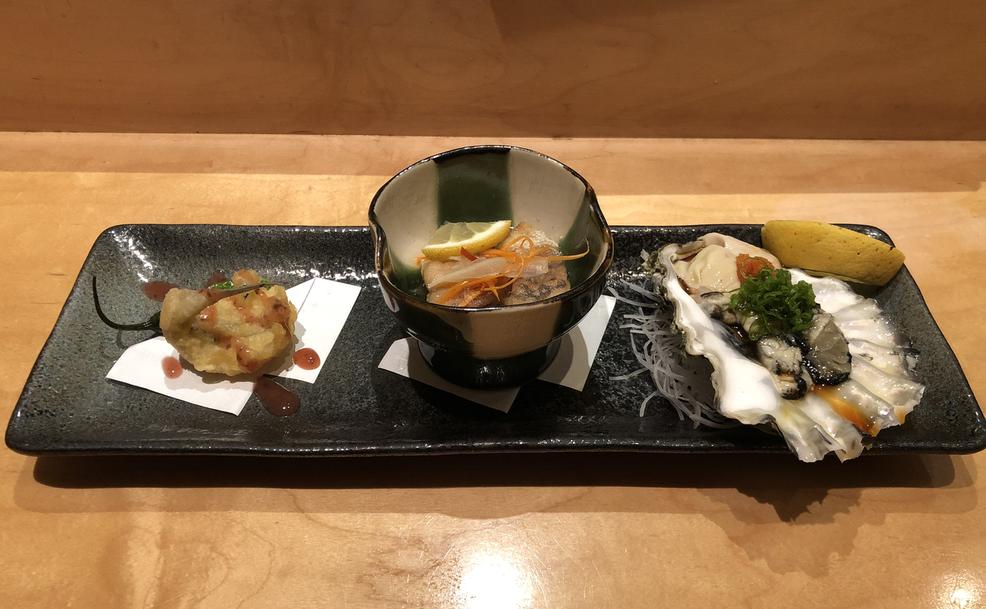 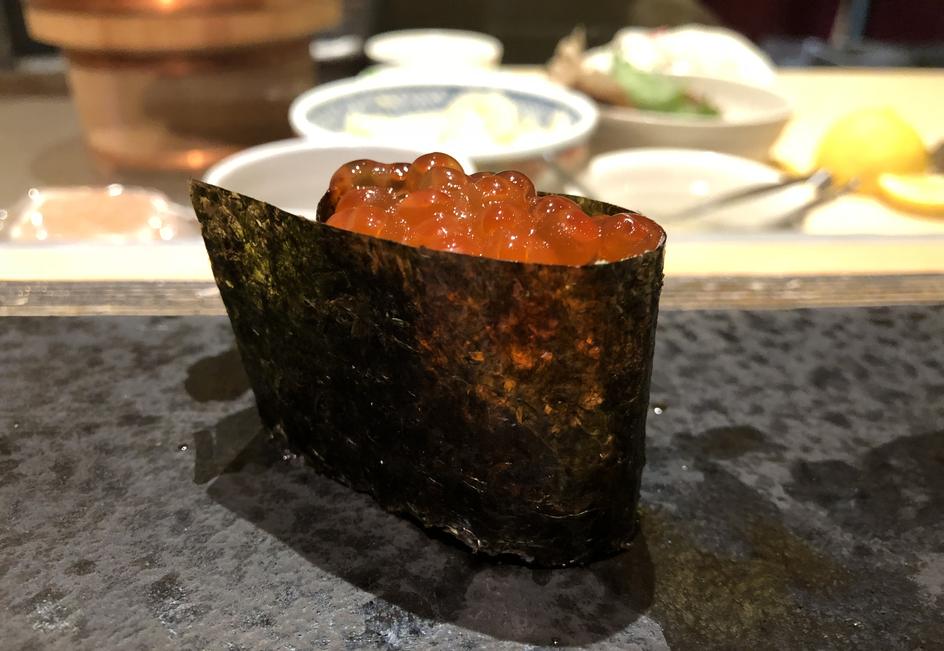 Ultimately, as I mentioned earlier,  what struck me  is the focus on the details. Take for instance, his shari (rice). For the majority of the meal, he blends it with Tezu vinegar. But for the Kohada (gizzard shad), Tadokoro-san switches to a rice mixed with Akazu, a red vinegar with a stronger taste that balances the briny nature of most hikari-mono (shiny fish). It's a sneaky change that makes a big difference. And remember the head of that Ama-ebi that I mentioned earlier? It came back, in tempura batter (as it should), towards the end of the meal.

S an Diego is a city that knows exactly what it is and what it wants to be. Unlike other shiny bastion of trendy America, like - and I'm just spitballing here - Austin, Denver and Portland (no offense, promise), San Diego isn't toeing the line between historic charm and gentrification. Take ​Old Town, an area that if nothing else, sets the bar for literal naming, since it happens to be old. I imagine it will hold that crown until my Manhattan neighborhood is eventually changed to "Garbage block".

As the oldest settled area in San Diego,  Old Town is an enclave of local-run businesses nestled within rolling hills in an absolutely beautiful climate. No frills, no surprises, no unnecessary modernization, which is also the case for local Sushi Tadokoro, a hidden gem and one of my favourite sushiya ​in America. And it's worth mentioning: if that delicate dance between old and new interests you, I suggest watching the Seattle episode of Parts Unknown. Like always, Bourdain captured that dichotomy better than anyone else could have. 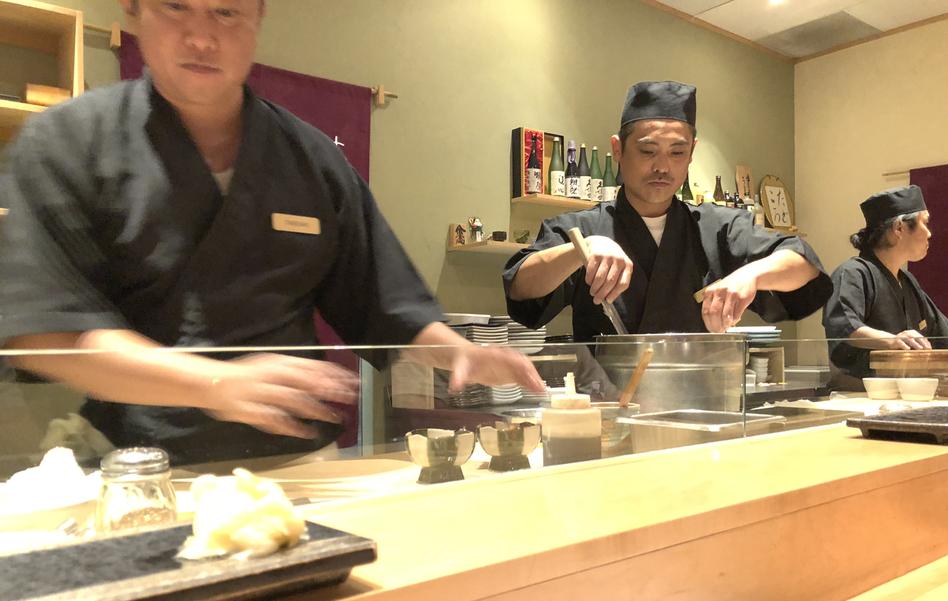 The preparation of the first nigiri sets the stage for the rest of the omakase. Tai (Red Snapper, above), treated in kelp, has the darkish hue and straight-from-the-sea taste that you'd expect. Iwashi was next, followed by Shima Aji (striped jack), pictured below. The sheer size of the cuts of fish will surprise anyone used to compact nigiri, but Tadokoro's style reminded me of Masa's at Sushi Zo, which I enjoyed immensely as well. The trick is to still use enough rice to get the duality that makes us love Sushi as much as we do. The nigiri at Sushi Tadokoro clears that bar. 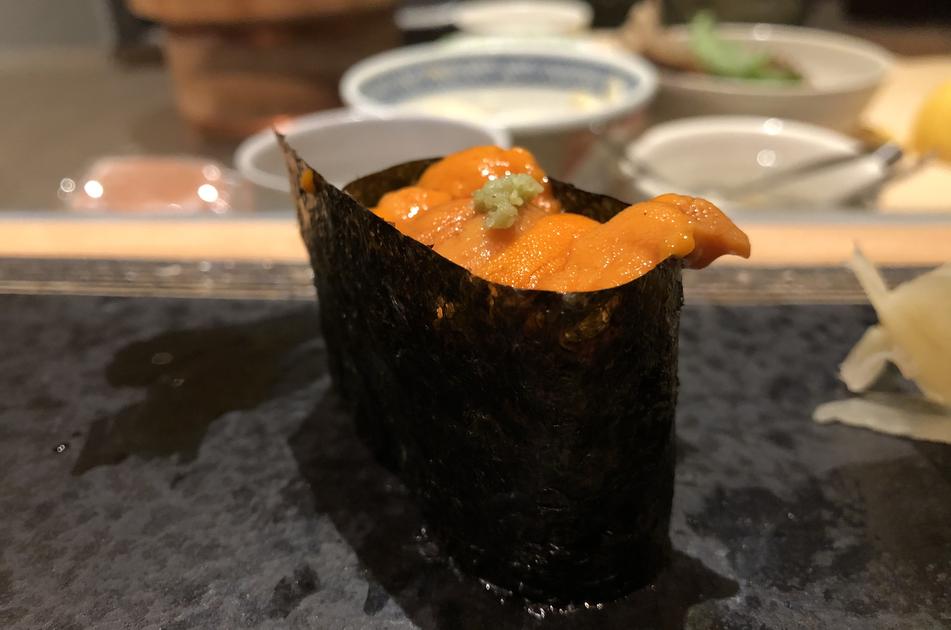 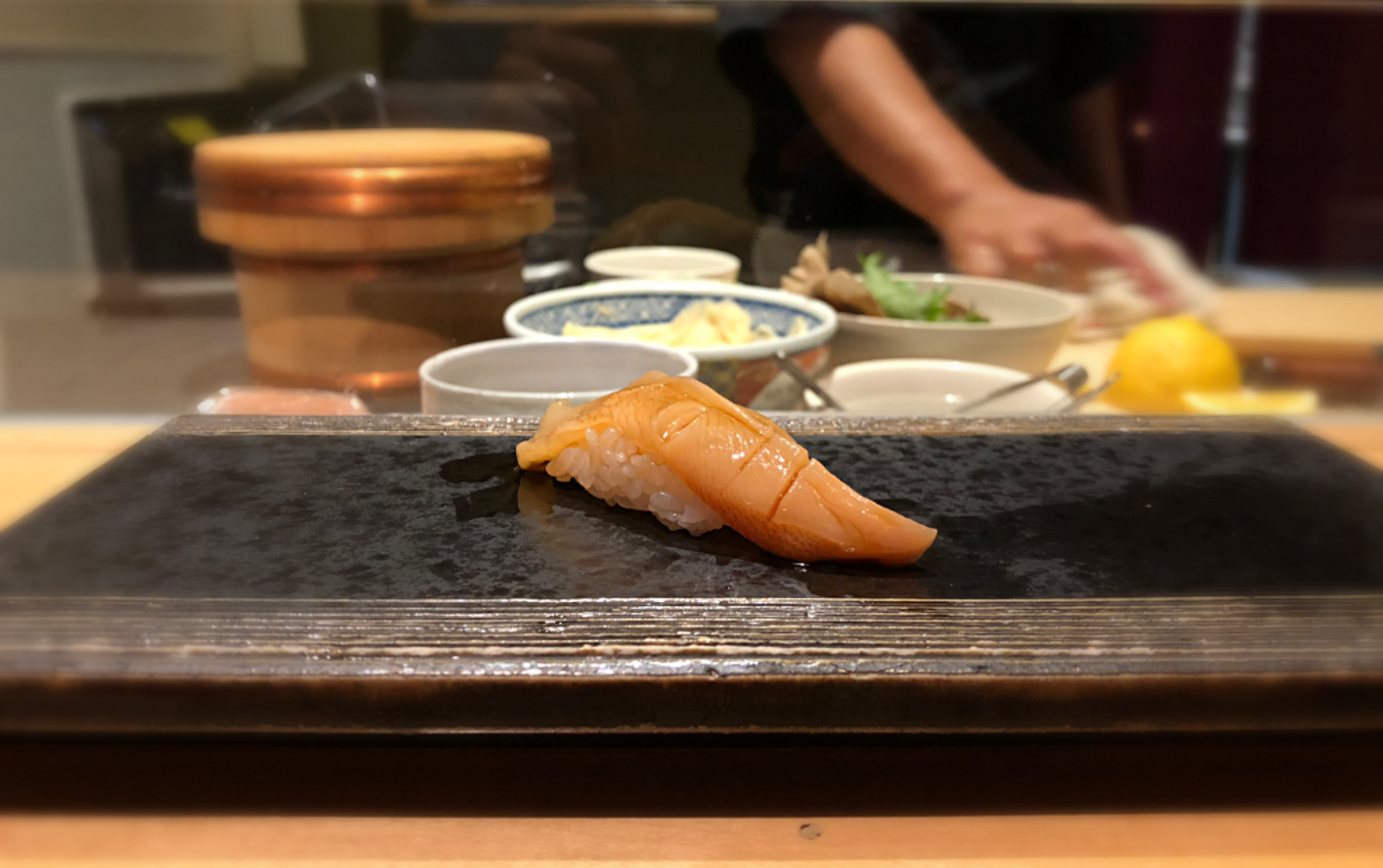 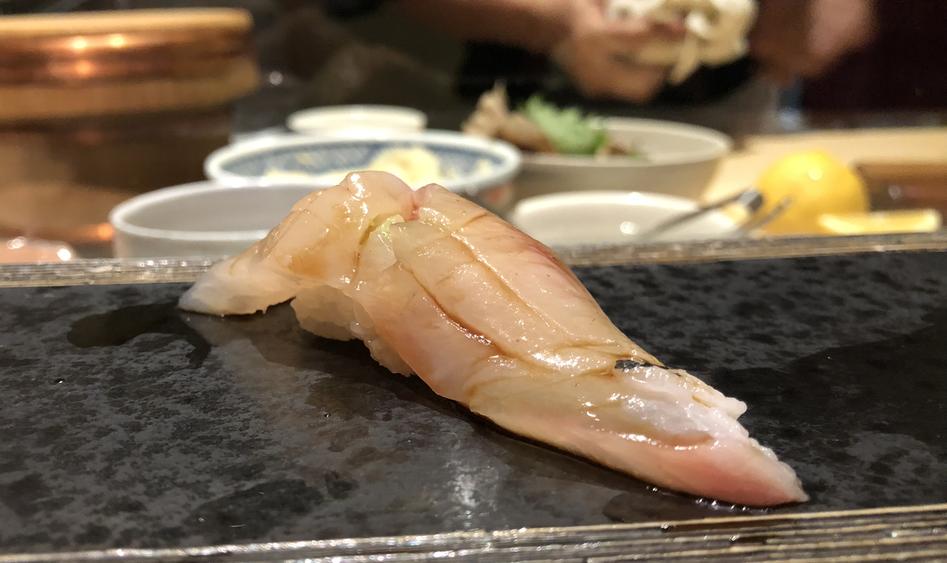 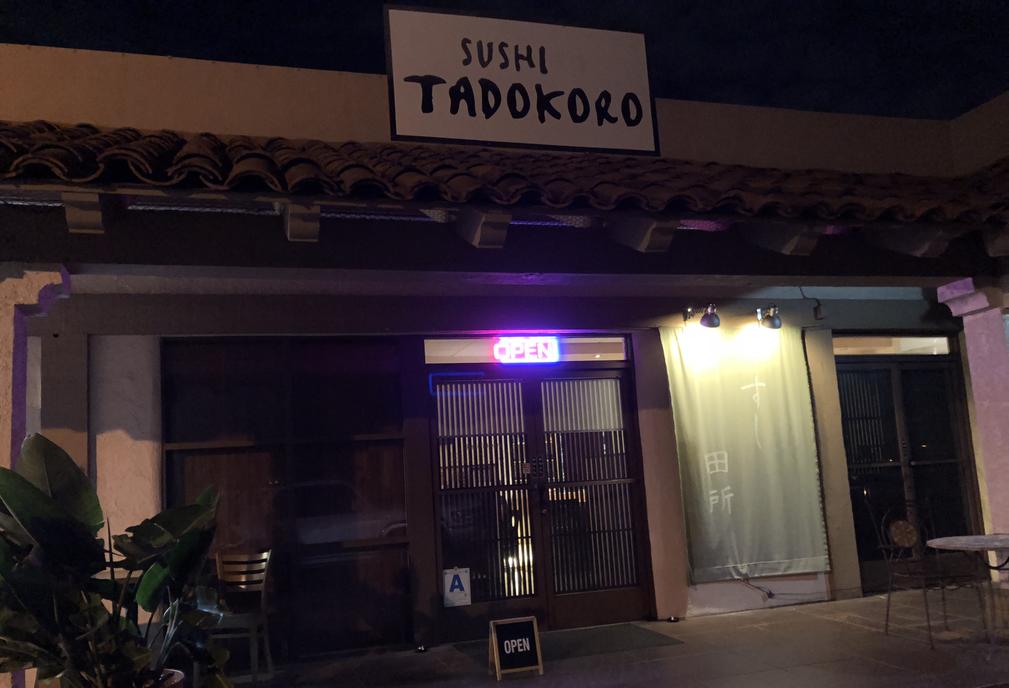 Sushi Tadokoro is located in an Old Town strip mall, but the understated outside belies the quality of  the sushi served within. Now for those of you who are used to fancier facades, you're probably better off at Zuma, which is the  sushiya version of a Kinder Surprise. In fact, one of my favourite sushi experiences that I've ever had was Sushi Kaji, a Toronto icon that happens to be located in a suburban strip mall. And frankly, most edomae-style sushiya are intentionally nondescript. ​​

But given the sushi served by the three-man team behind the counter, Sushi Tadokoro could be located inside a shipping container for all I care (not a bad idea!). The menu offers the option of leaving it to the itamae and going at it a la carte, but at $85, the 15 course omakase was an easy decision. It doesn't hurt that my guide on the 75 minute journey was the restaurant's namesake, Takeaki Tadokoro.  Takeaki-san opened Sushi Tadokoro ten years ago, and he's been unrelentingly focused on meticulous detail ever since. To wit, check the cross-cuts on the Iwashi (Japanese sardine) below, a move I rarely see for hikari-mono (shiny fish). In this case, the move elevates the flavour and cradles the green onion and shoyu​ soy sauce.

View of the counter

Kamasu (barracuda), torched as always, Ikura ​(Salmon Roe, pictured above) and Uni, from Hokkaido (pictured below), were all highlights as well. The summer is not the best time for Uni - that'd be October to February - but the Orange colour is an indicator of strong quality. Lastly, it's worth mentioning the not-of-this-world Aoyagi (surf clam/orange clam). The clam family isn't the most popular among the general public, but I believe (deep down, promise) that it's because those naysayers haven't had it properly. So PSA: have it at Sushi Tadokoro​, where the historically named baka-gai​ (which actually means "idiot shell", no joke) is a great entry point into the world of clamping (that's trademarked).

But the Itamae's personal pride is his Zuke (marinated Tuna, pictured above), which he marinates in ​nikiri shoyu (a type of soy sauce) for days. The beauty of Zuke is that it's a connection to techniques used in the Edo period, when the only options for preserving fish were using shoyu since refrigerators didn't exist.  While most sushi chefs will leave it there, Tadokoro-san adds a touch of Yuzu to the top, which he calls his version of a cherry on a sundae. Yuzu is a popular ingredient that can be overpowering, but at Sushi Tadokoro the use is understated; in fact, you can barely see it in the picture above.​ 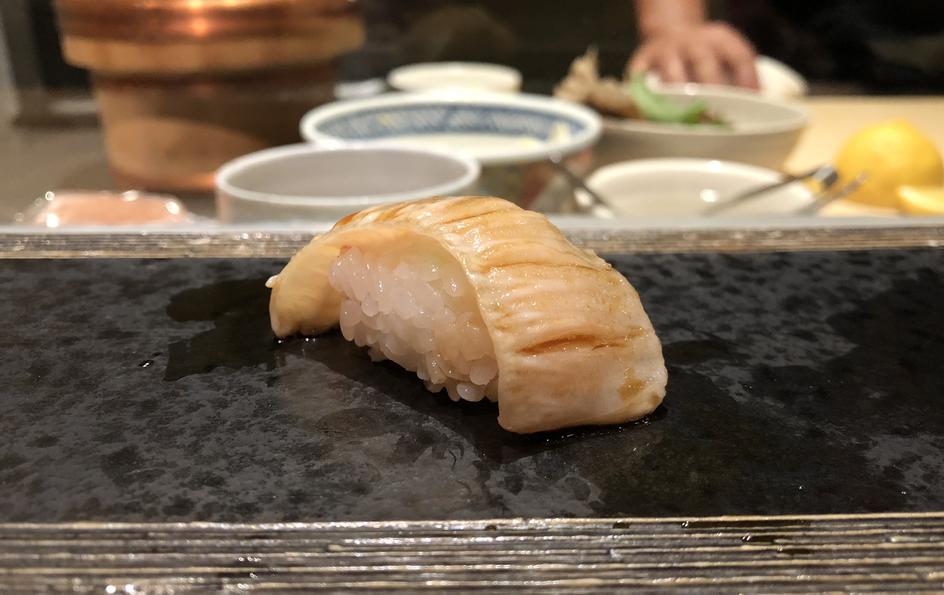 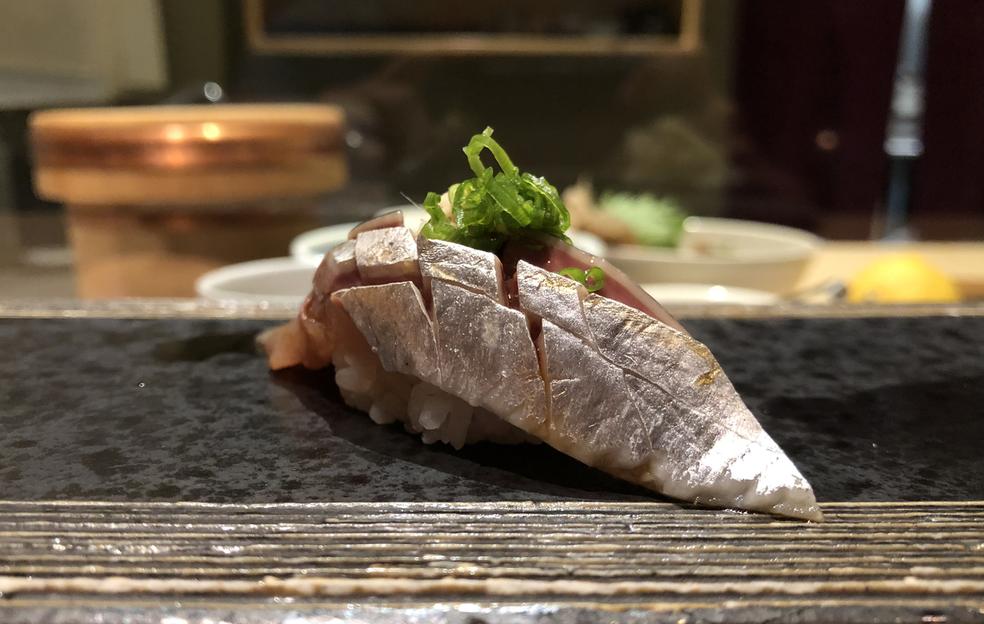 Sushi Tadokoro is located in a strip mall, but don't let the exterior fool you. While the neon lights and funky sign are a worthy reflection of the neighborhood, the interior, and especially the counter, are classic.  Behind the counter, the three staff members are as friendly as you'll get, even when other customers are asking to take pictures behind the counter (an actual thing that happened when I was there). They're also knowledgeable and will explain their process unprompted, an unnecessary but welcomed touch for customers who are interested like yours truly.  Like its neighborhood, Sushi Tadokoro knows exactly what it wants to be: a community sushiya with soul. Just give them a chance to show you. 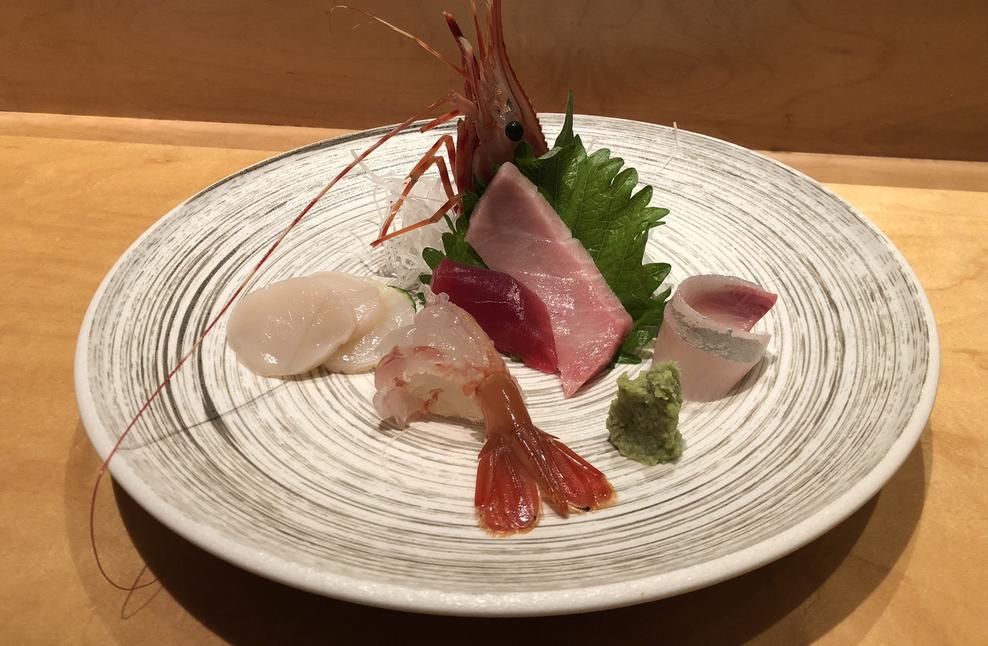 Though the omakase is nigiri-focused, the meal starts with Tsakamono, which loosely translates to a set of cooked appetizers (pictured below). Tilefish, lightly breaded on the left, is sourced from Japan, where it's a common option. More local is the oyster on the right from Seattle, which was as big as my hand but just as creamy as the smaller oysters from the east coast. Fried aji with a lemon touch rounds things off down the middle.
​