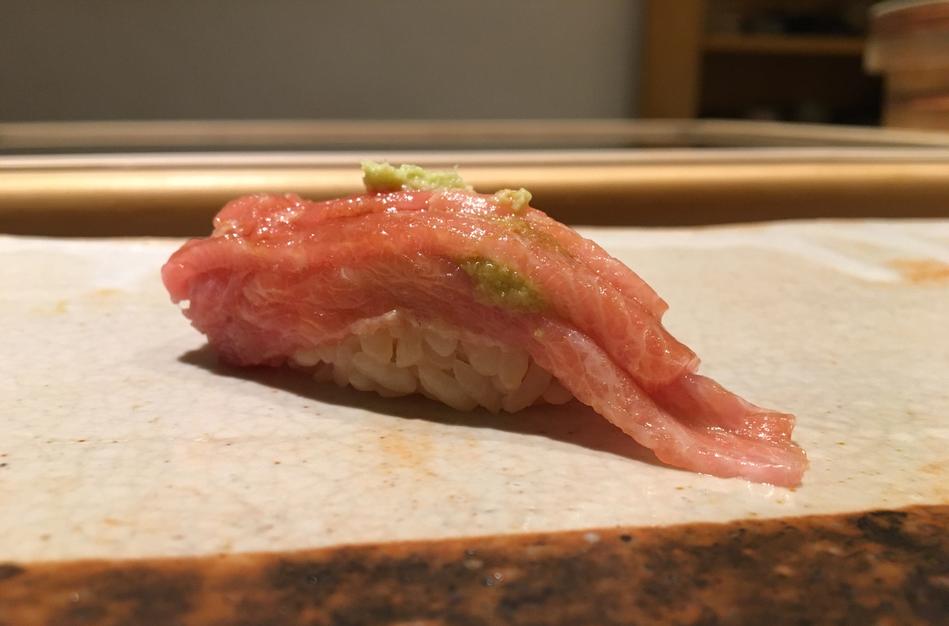 One aspect of Sushisho Masa became apparent immediately: this isn't an Omakase to try if you're not ready to eat. We had virtually every fish/shellfish in the netabako ​above raw (obviously), but we were also served interspersed courses cooked as well. A particular highlight for us was the Kawahagi (Filefish, pictured below), served both as nigiri with it's own liver on top and grilled towards the end (not pictured).

P ressure is a funny thing. It has no limit. Consider for instance a pilot, on final approach to a runway (or if you're that Air Canada flight from last year in SF, a taxiway). Consider a comic, standing under the bright lights of a basement comedy club. Or conversely, you could be a sushi blogger, making your first trip across the Pacific Ocean to Japan, trying to sort through recommendations from connections, TripAdvisor, Tabelog, and everyone else.

Trust me, you haven't lived until you've felt the pressure of deciding how to spend only three dinners in Tokyo. This was leg 1 of my honeymoon - I wrote about my entire Japan triphere - but I could already taste the regret, lingering with me for the rest of our 21 day boondoggle. Tokyo though, is famous for its culinary scene. Picking the best might be difficult, but picking a bad restaurant altogether? That's near impossible. Fortunately, my meal at Sushisho Masa is one that I still fondly remember today, more than 2 years since. I wasn't going to write about it, but it's an temporary cure to my real regret - not spending more time in Japan.

So consider this a long overdue mini-blog about Sushisho Masa, an excellent omakase that still has my stomach expanded.​ 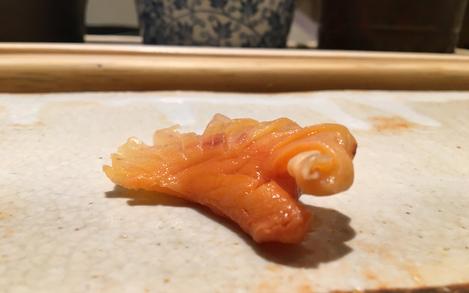 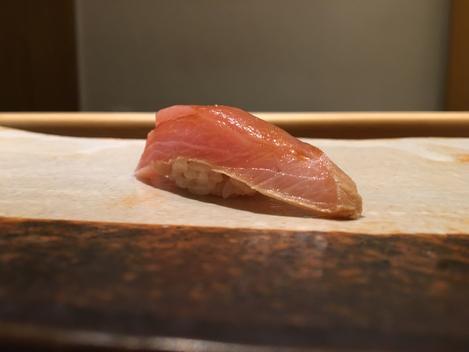 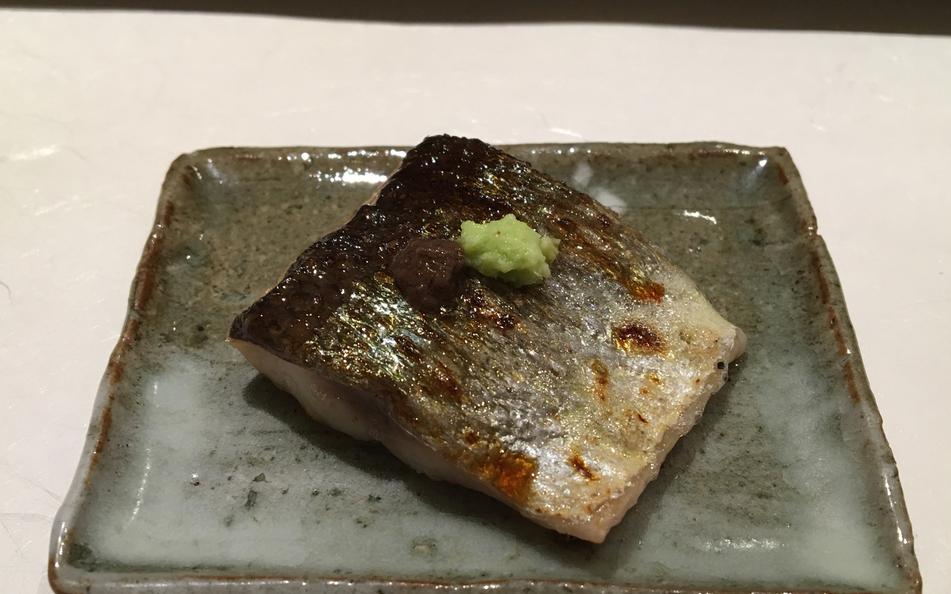 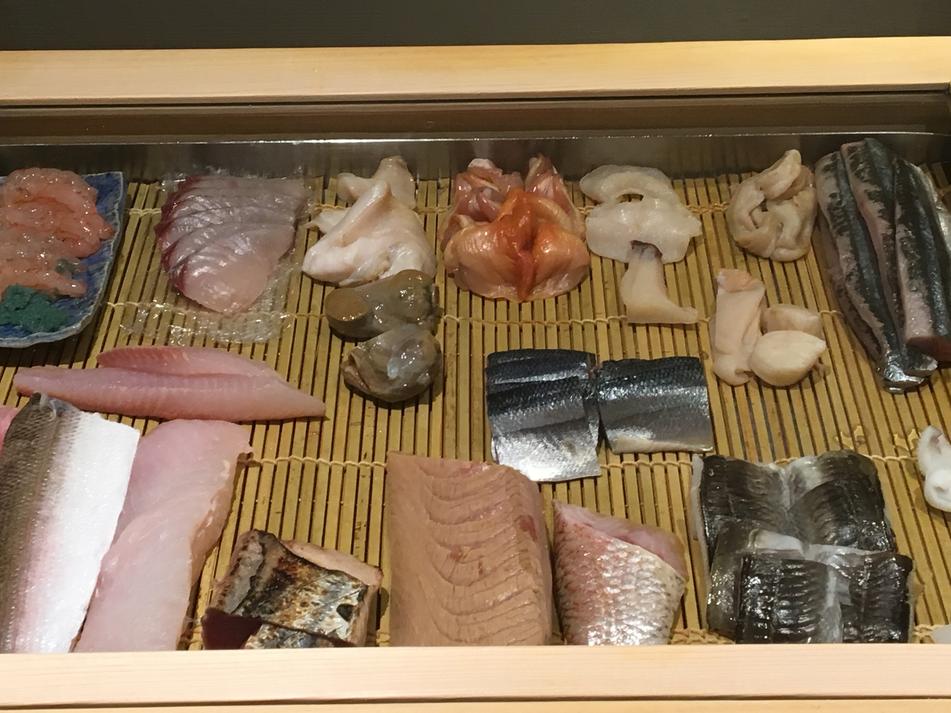 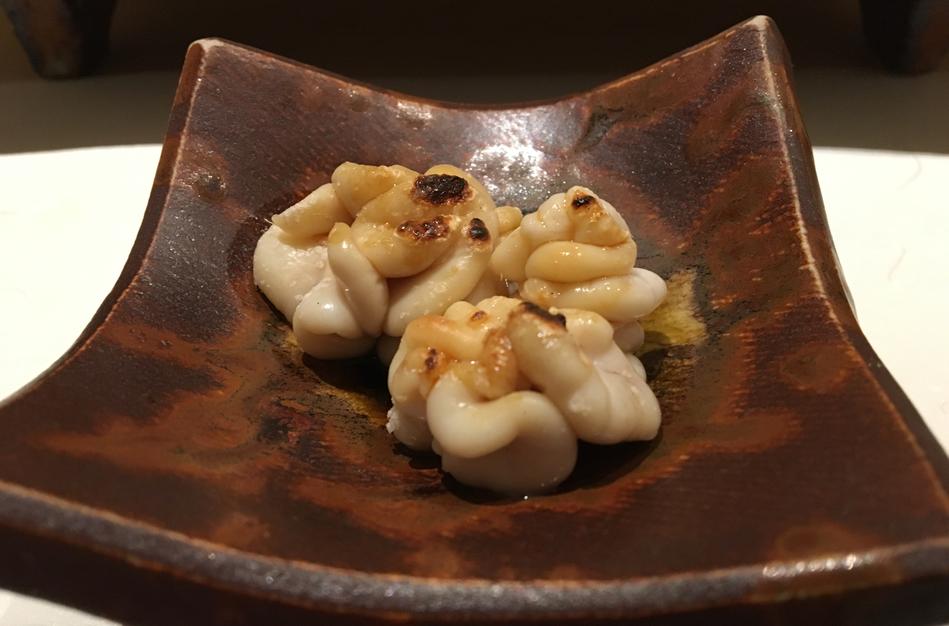 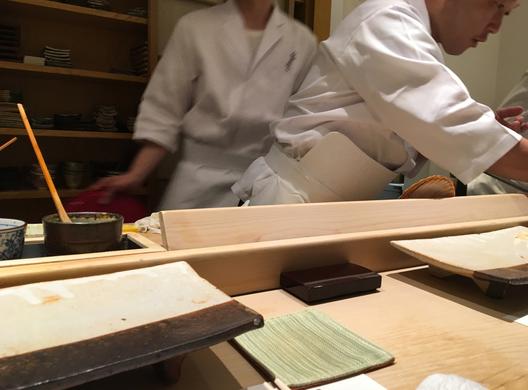 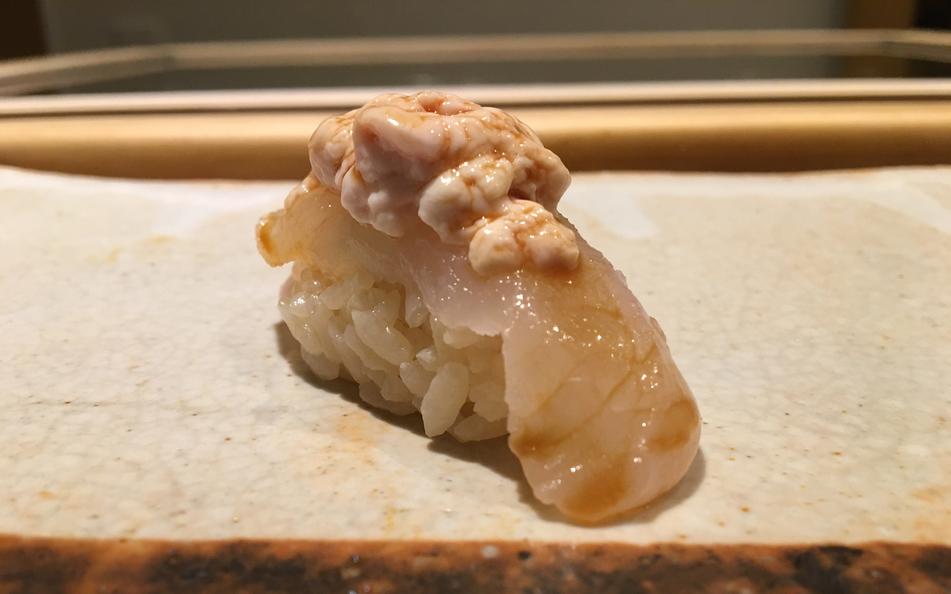 ​The waza (technique) is what drew my attention. Each piece of nigiri is formed as if the fish and rice (Masa-san uses a blend of three varietals) are made for each other. If you haven't had Kasugo (baby sea bream), you're missing out, especially when it's lightly torched (bottom left above).  In the almost 40 courses, there were delicacies where chopsticks are necessary: Uni,  Ikura and Shirako (cod sperm sac).

​Of course, the tango between fish and rice will always be the most appealing thing about sushi to me, and Masa-san and his nigiri do not disappoint. The double layered O Toro, which for recent New Yorkers may evoke memories of Ichimura, was a personal highlight. It's pictured below, layered with wasabi from Shizuoka Prefecture (home of Mt. Fuji). 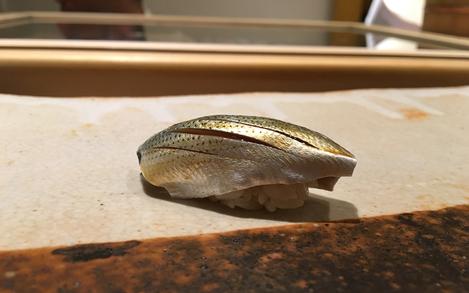 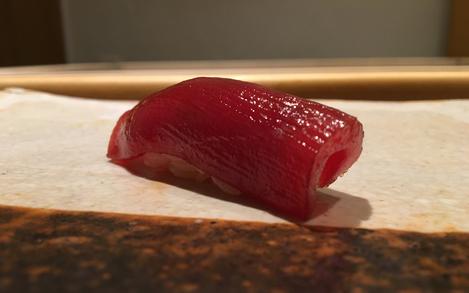 One of the defining characteristics that I still remember was the technique of the Chef, Masakatsu Oka. If you're unfamiliar, Masa-san trained for years under Keiji Nakazawa, who currently operates Sushi Sho in Honolulu. When people talk about real sushi legends (rather than just *cough* bloggers with a taste for raw fish *cough*),  Nakazawa's name is front and centre. Sushisho Masa is named in tribute. 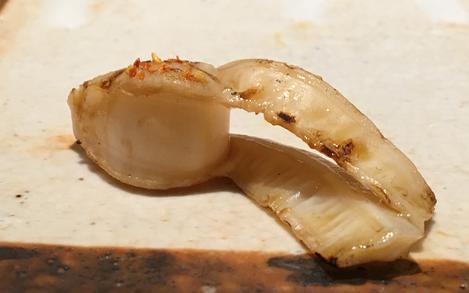 Reservations at Sushisho Masa - and similar places - are notoriously difficult for tourists. It's not because of some misplaced fear of tourists - it's to guard against no-shows and rude behaviour, which unfortunately is a problem that many restaurant owners in North America know all too well. We made ours through our hotel, which required a credit card and signed form to make it on our behalf. At other restaurants - including a phenomenal restaurant in Kobe (message me on Instagram for the name), we had some luck by simply showing up and politely asking. 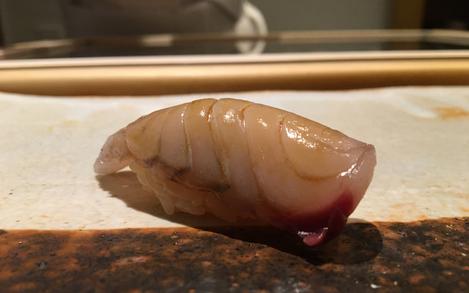 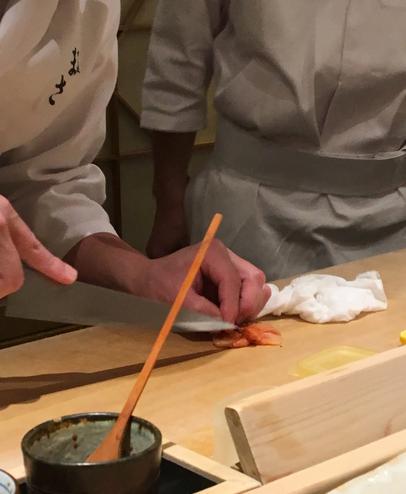 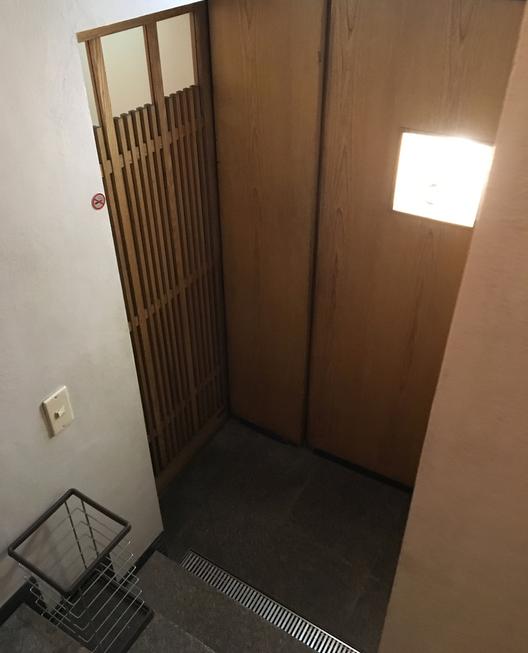 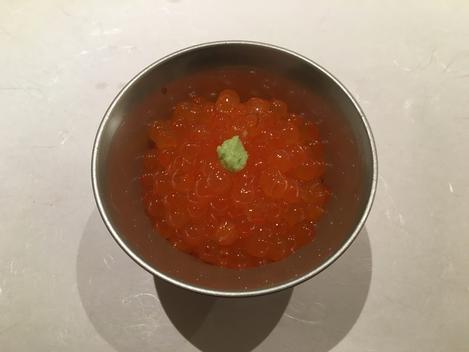 ​Turns out that bag is pretty deep, because sea grapes (which is a a real thing) was outrageously delicious. Trying to describe them is like defining a colour, but the best I can do is describe eating the sea, but a crunchy version. I didn't expect that from what looks like fish roe, but then again, I didn't expect Springbreakers ​to be my favourite movie of 2012, and yet here I sit, in my office, with a limited edition poster of that instant classic right behind me. 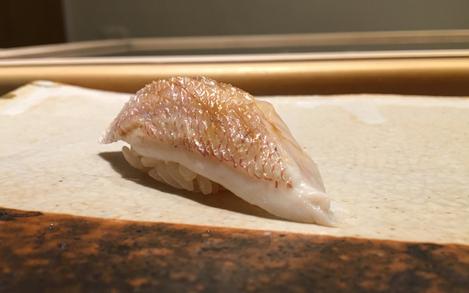 The restaurant itself is located at the Nishi-Azabu intersection (a busy one), near Roppongi, one of the financial and entertainment hubs of Tokyo. It's an area that makes it easy to extend - or start - your night before or after the almost 2.5 hours you'll spend at Sushisho Masa. ​We found the time commitment well worth it.

​Located down a a stairwell, Sushisho Masa wouldn't appear to be beckoning to the outside world, but the inside - led by Masa and his staff - could not be friendlier. Despite cramped quarters - there are only 7 seats -  Masa and his team make every effort, often with the use of maps, to engage customers and communicate what they're eating and from where. 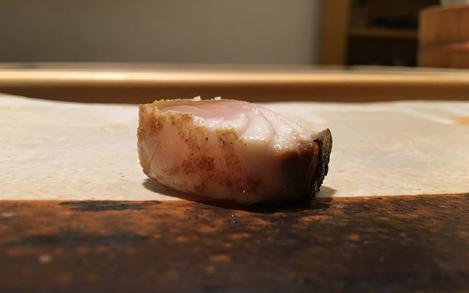 ​Masa-san also ventured into his bag of tricks, serving a signature combination: buri (​adult yellowtail) wrapped like a pinwheel around grated wasabi. ​It's pictured below. 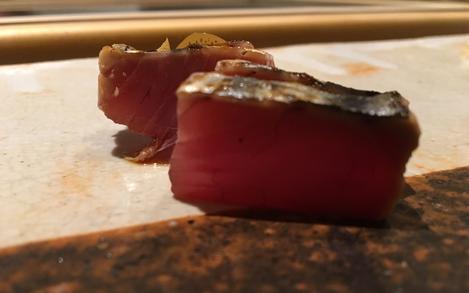 One of the sheer delights from the omakase is not just the volume, but the volume of non-nigiri courses. While each of these unique courses hits the same theme - fish (or shellfish), presented alone (see pics below) - the methods of preparation varies. 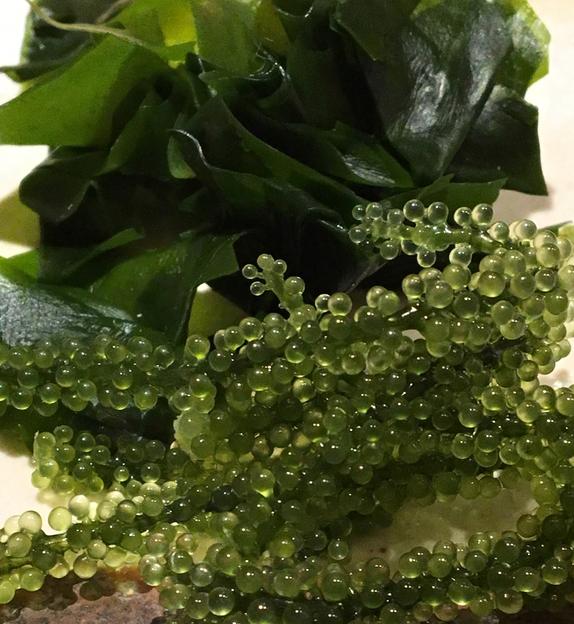 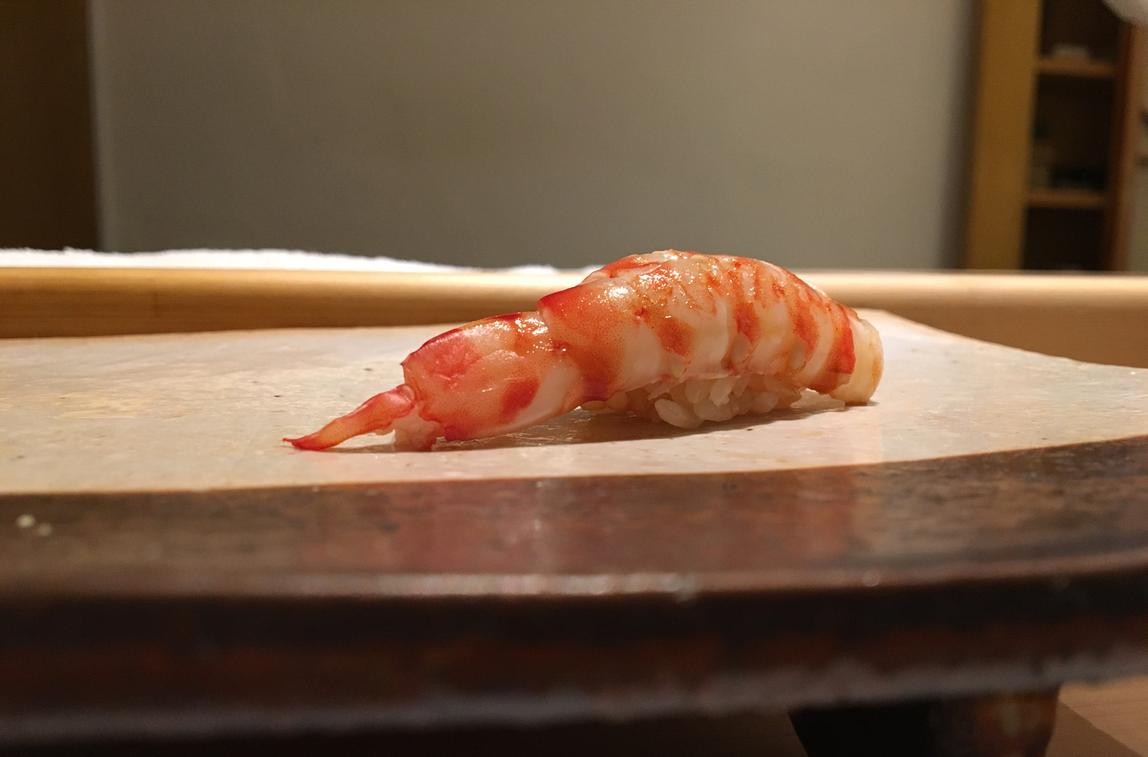 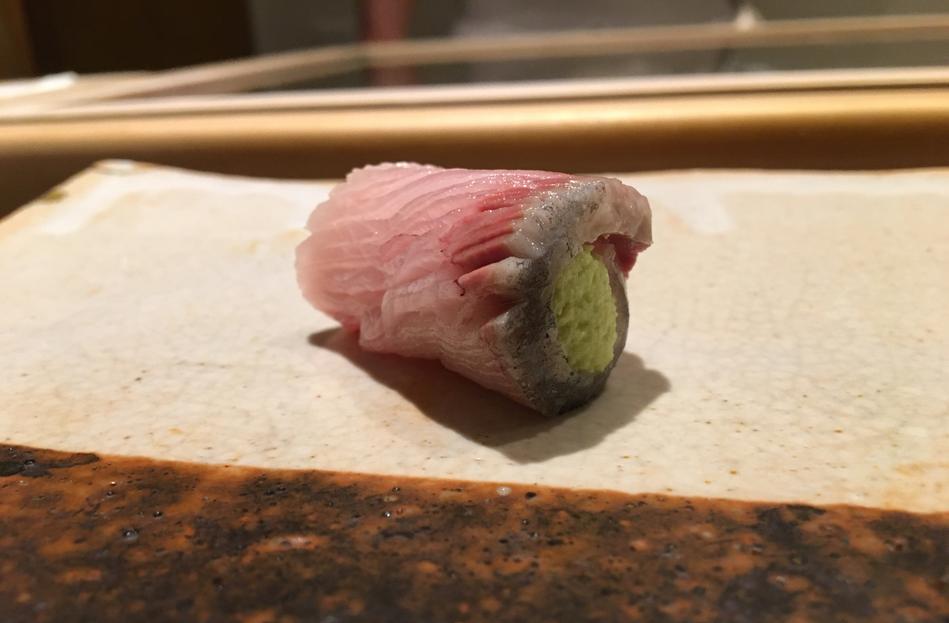 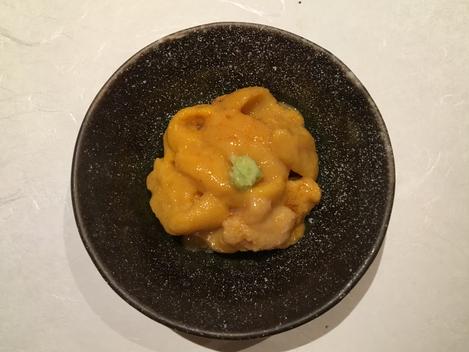 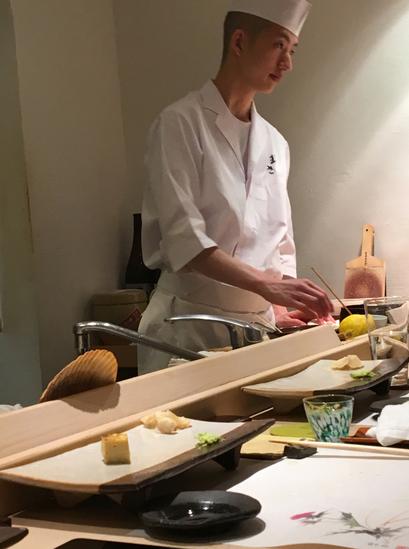 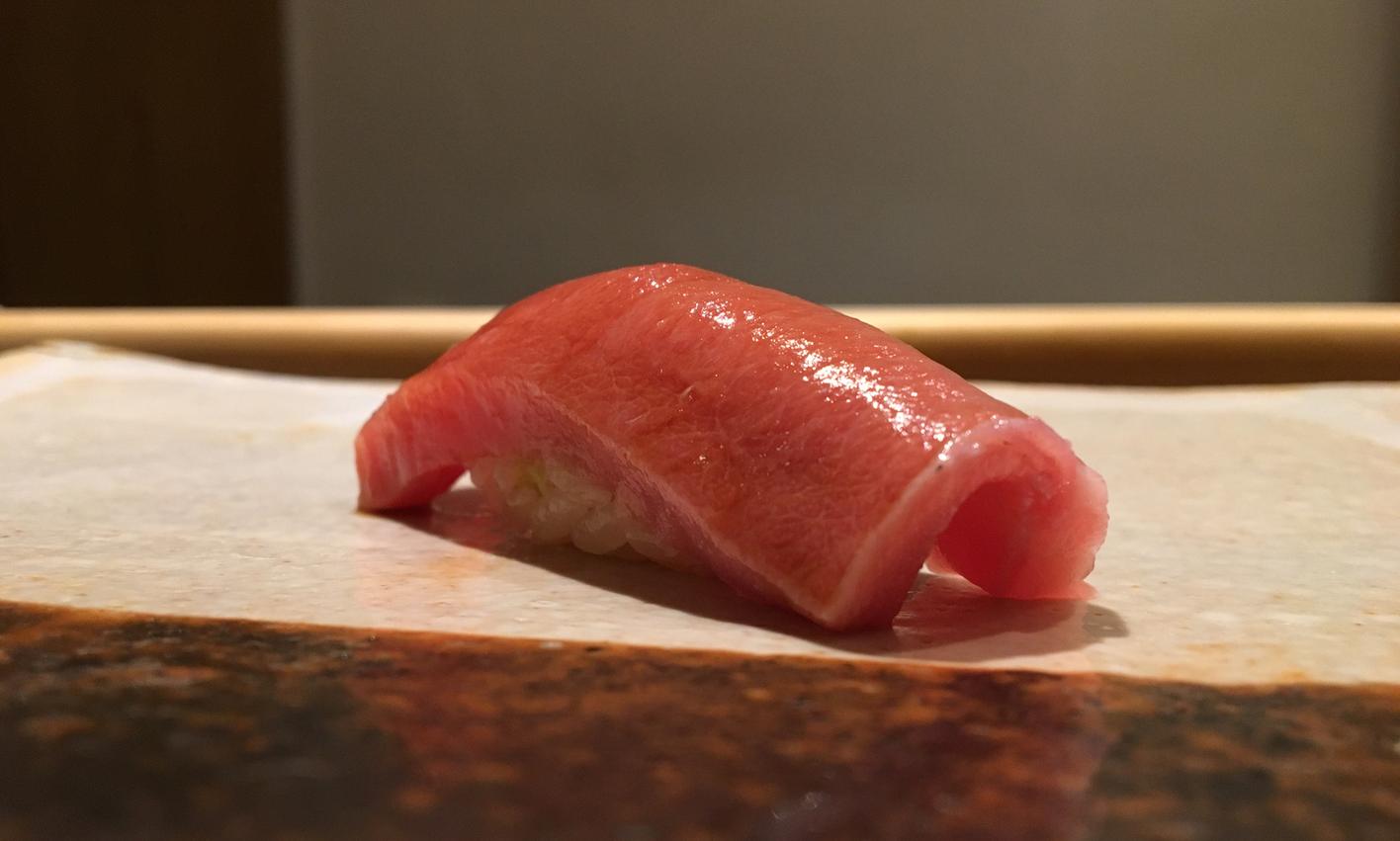 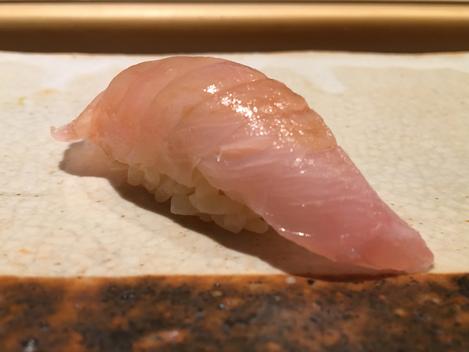