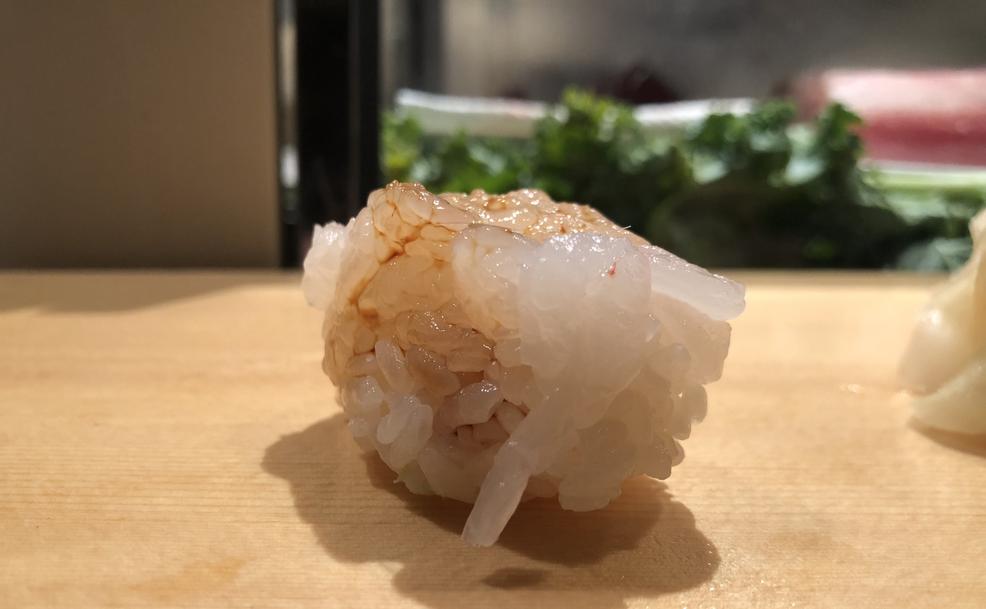 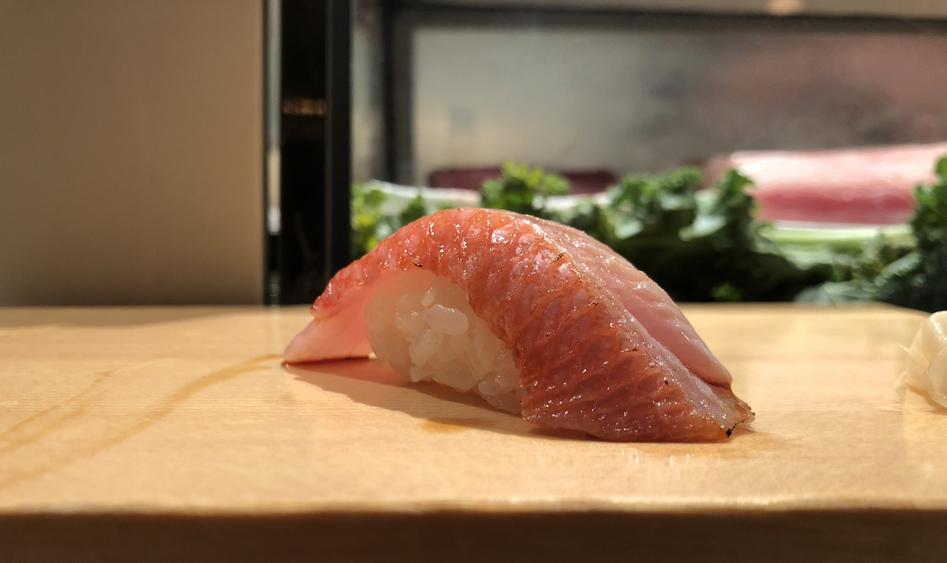 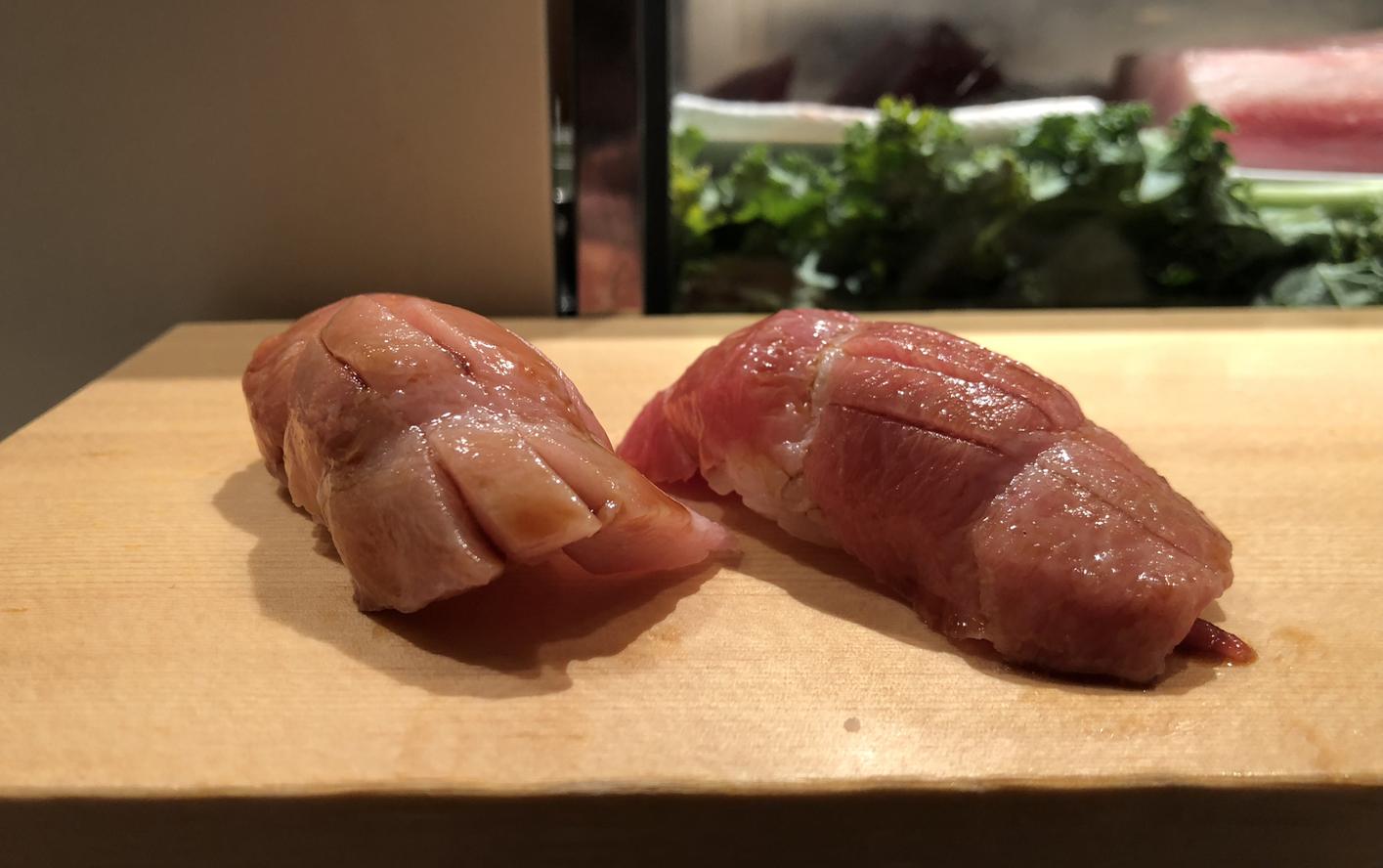 Shiro Ebi (baby white shrimp), pictured above, may not be the most photogenic Neta on the planet, but views are for kids. Though it may look different from far, Shiro Ebi is actually multiple baby white shrimp, pressed together, to form a single piece of nigiri. It's a springtime Neta, but scarcity and cost usually are prohibitors (let's pretend that's a word) for seeing it Stateside. ​

In my first visit to Uogashi, I ordered the $95 Omakase, which - to this unsophisticated palette - is one of the most reasonable options in the city (there's also a $135 level). My second time, my dinner-mate and I went a la carte, which I sometimes prefer as a way to taste variety. I'm no expert, but I've eaten a lot of sushi; I've found that a hallmark of a special neighborhood sushiya​ is the atypical fare. For example, Marumi, which is as local a spot as you'll get in Greenwich VIllage, has wonderful shellfish Chirashi and Botan Ebi (Peony Shrimp) regularly on offer. At Uogashi, there are four specific menu items that I'd recommend, especially for the more adventurous among you.

The first is Kuruma Ebi (Tiger Shrimp, pictured below), which like most of the Neta here, is from Japan. It's striking pinwheel shape is so beautiful that eating it always feels like the foodie version of Sophie's Choice. Second, the Umeshiso maki, a mixture of fermented plums (Ume) and Shiso leaf. Sure it's bitter and an acquired taste, but so is coffee. Give it a chance. 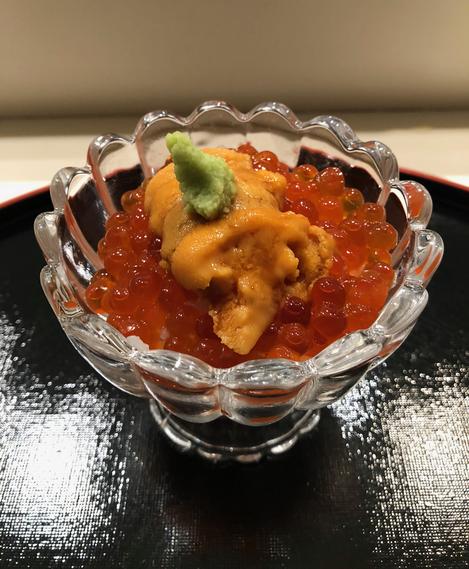 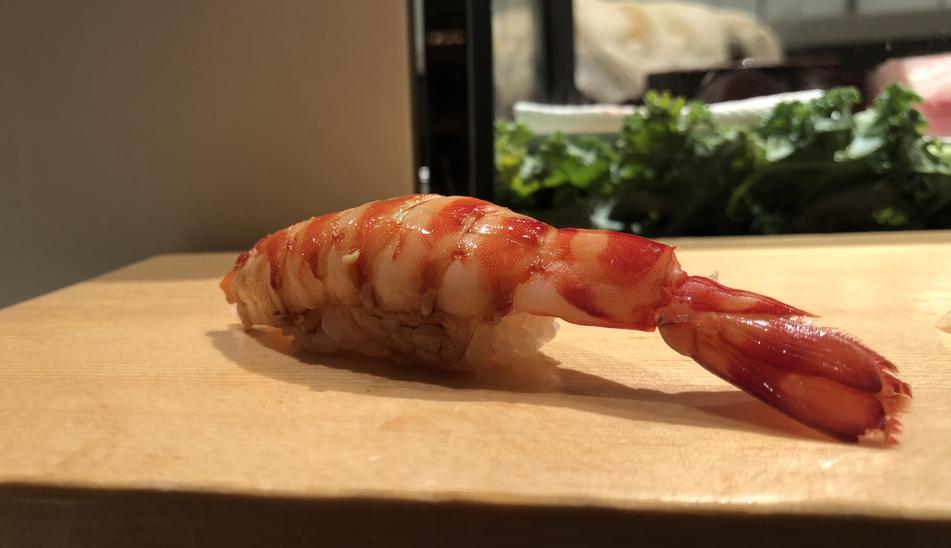 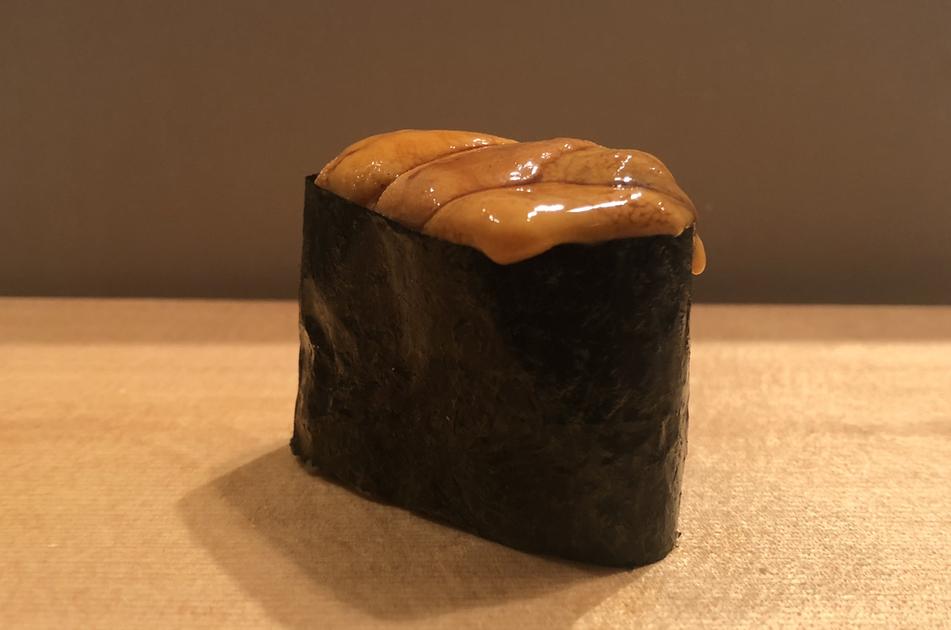 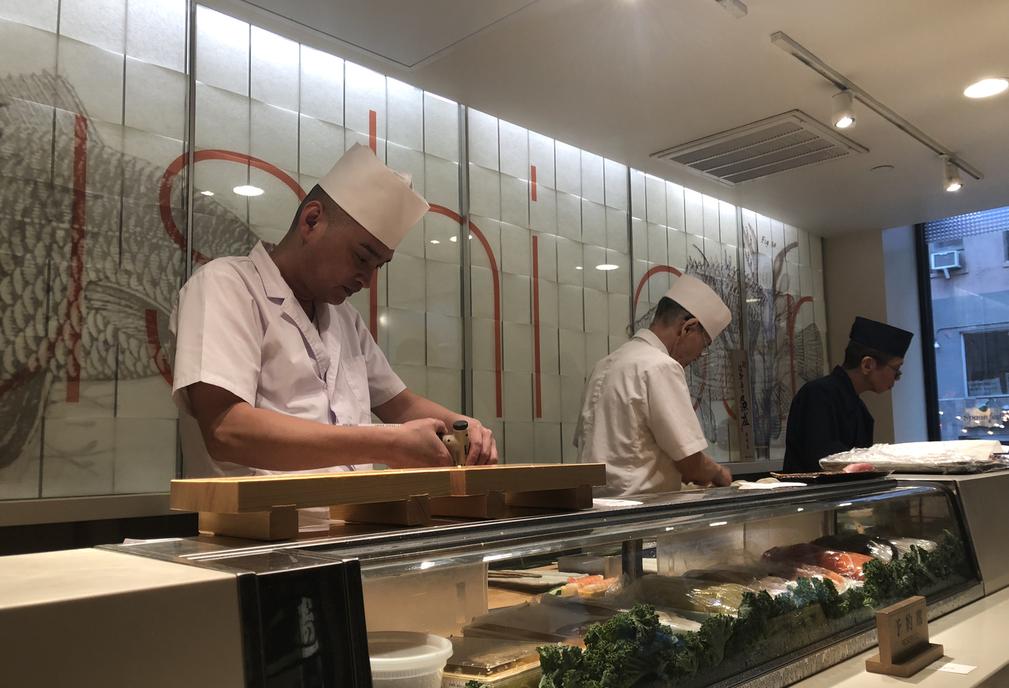 L ife is about - or at least partially about - absorbing the hits and bouncing back. The owners of Uogashi, a gem of a sushiya located inside an apartment building on West 51st street, would know that well. That's because before Uogashi was a gem on West 51st street, it was a gem in the East Village, well-liked by many, including yours truly. That was, however, until a brutal October 2018 fire left its former home completely unusable. The midtown west version is the successor, despite the bizarre absence of that fact anywhere on the internet.

The super-long counter that appealed to many is gone, but the charm remains.  Moving the magic has been historically tough for restaurants with local followings, but Uogashi has avoided that risk in a few ways. First, some familiar faces behind that long counter are back, and with them, their devoted local followings.  Second, that very modestly priced, $95 Omakase has made the trek northwest. Though it's required for those sitting at the counter, you won't hear many complaints given the relatively reasonable price point. 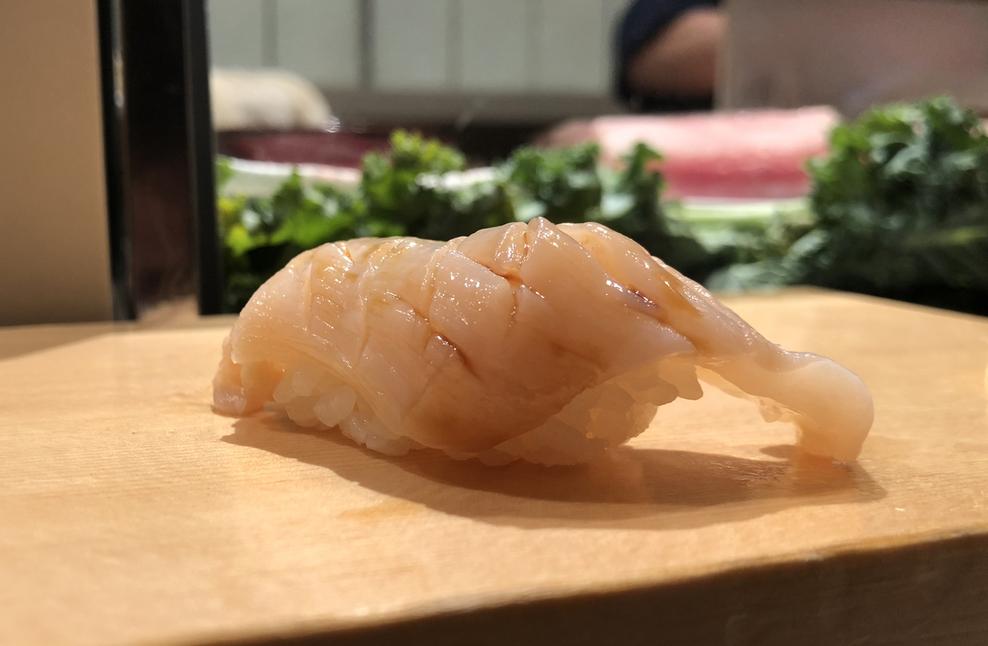 Uogashi is owned by a Japanese conglomerate that also counts a fish supplier among its holdings. I'm no Bobby Axelrod, but even I know that owning different levels of the supply chain decreases the costs to the business. As Uogashi's fairly bare bones (no pun intended) website puts it, those cost savings are "passed onto their customers". What that means for me and you is an extremely reasonable $95 Omakase at a sushi counter run by three experienced itamae, one of whom - Takeshita Yuki - is a firm contender for real ​sushi legend status (more on him later).

Uogashi isn't the only sub-$100 omakase I'd recommend in New York City. But what separates it from some of the other options is the quality of the ingredients, which takes full advantage of the (big business term warning) integrated supply chain. To that end, classic NYC Omakase stalwarts like Katsuo, Nodugoro and Hotate-gai ​appear, but so to do non-traditional neta like Mirugai (giant clam), Shiro Ebi (white shrimp) and Sawara​ (spanish mackerel), pictured below.

No such issue for Uogashi​ and Takeshita-san, who also managed to track down Mirugai (Giant Clam) for the menu on the night I visited. Miruguai​, which you can find in North American waters (in addition to Japan), isn't as hard to find as Shiro Ebi, but it does apparently take great skill to prepare properly. Ours (above) was a honed blend of the familiar crunch, quick preparation and soft touch required to make it delicious, regardless if you're a borderline psycho that doesn't like clams. 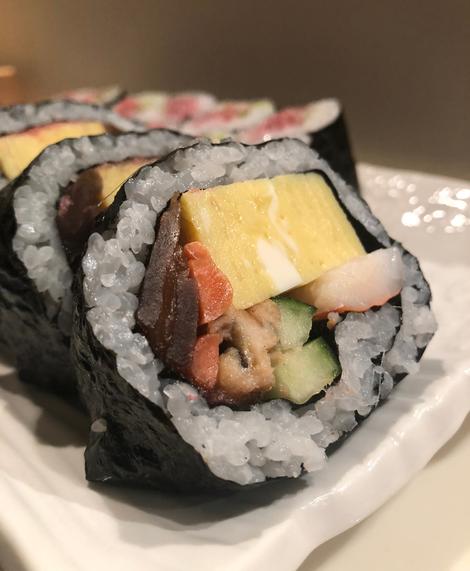 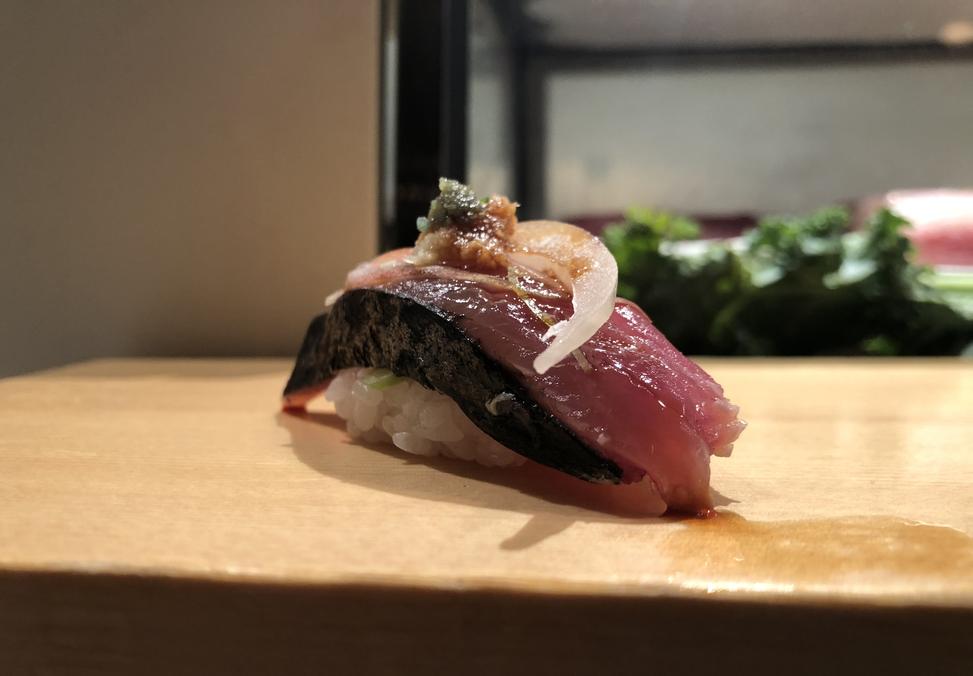 Even potential missteps, like taking a page out of the Fairmont Vancouver's apparently transcendent Raw Bar by putting raw onion on top of Katsuo (Bonito, pictured above), isn't enough to ruin a Neta (topping) in early season and delicately layered with two muted sauces. I'd love to tell you which sauces, but in a little peak behind the curtain, I got lost in the sushi and forgot to ask. Happens to the best of us. 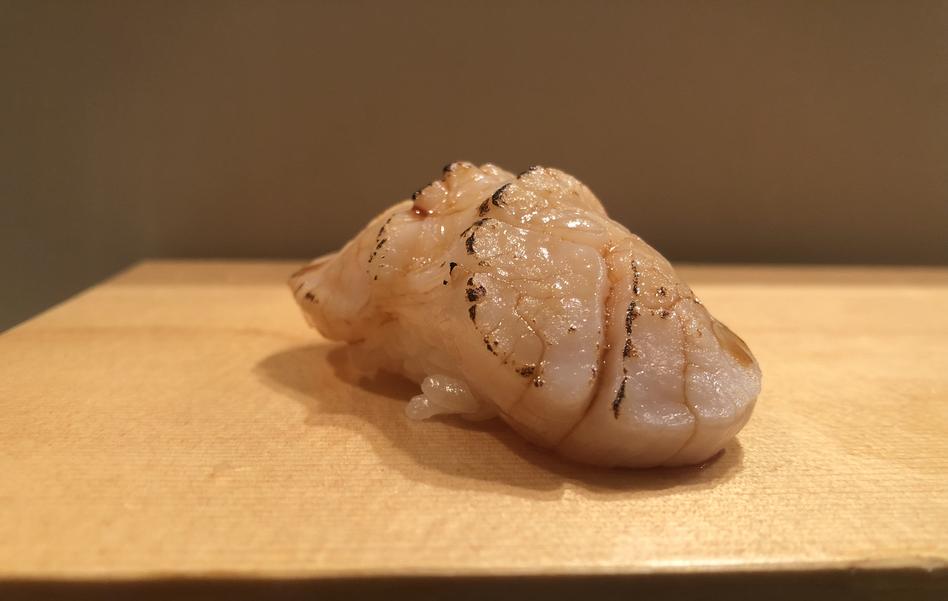 An example: on my first visit, I was served Tsubugai (snail) as an opening course. For those of who you unfamiliar with Tsubugai, it's broiled and served inside it's own shell, and extracted by the diner with a small fork/pick. For those of you unfamiliar with me, I have the dexterity of that baby elephant from The Jungle Book.  That soap test they make Dentists do? Would have been an absolute disaster for me. So naturally, I sometimes have issues with the "extract the snail" step. The staff noticed me struggling, extracted the half snail still lodged inside, and brought me an already started, second Tsubugai. ​There's also the little things - refilling tea, punctual meal servings, friendly but not overbearing conversations - that will increase your comfort level. Uogashi is located inside an apartment building, so it's no wonder that my dinners there felt like eating in a friend's home.

THERE ARE SECRETS TO THE MENU 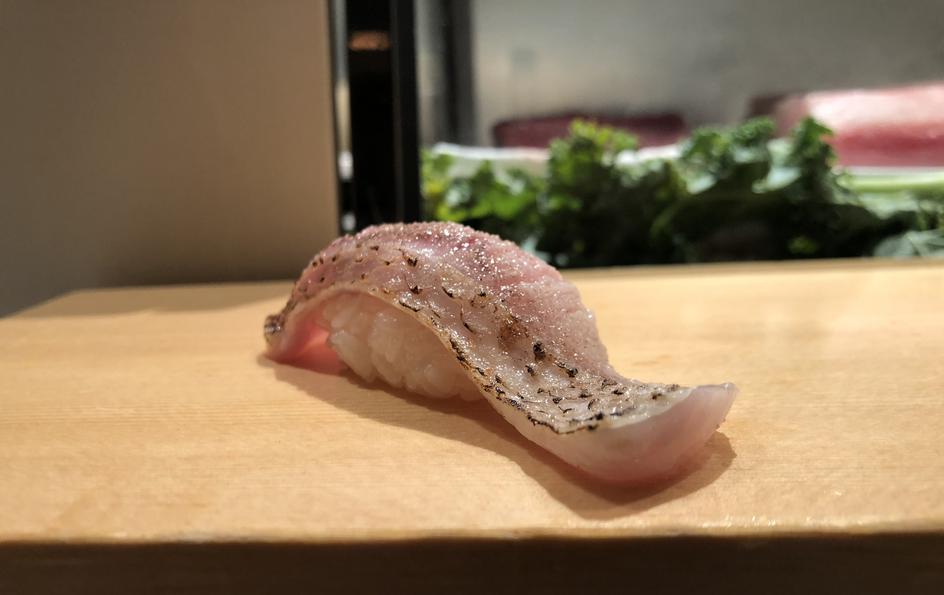 Uogashi also has a version of a Kaisen-don, colloquially known as an uni-ikura cocktail (pictured above, right). Putting two nectars together isn't something I usually enjoy, especially when it's so blatantly done for the 'Gram, but the glass bowl it comes in is just so effing mesmerizing. It's like eating the Louvre. So I guess disregard what I said earlier about views being just for kids and sign me up for ninety of these things (and a few from Kosaka as well).

Lastly, the Futo Maki​, (pictured above, left), a much larger version of the makizushi that you may be familiar with. That extra space isn't just for fun: more ingredients. The typical Futo Maki features at least four ingredients, including Tamago ​(Egg). Uogashi's includes Anago (saltwater eel), which is uncommon enough that the Itamae informed us in advance. To quote my British cousins, it was "brill", but don't try to be a hero: eating in two bites is not only customary, it's smart. 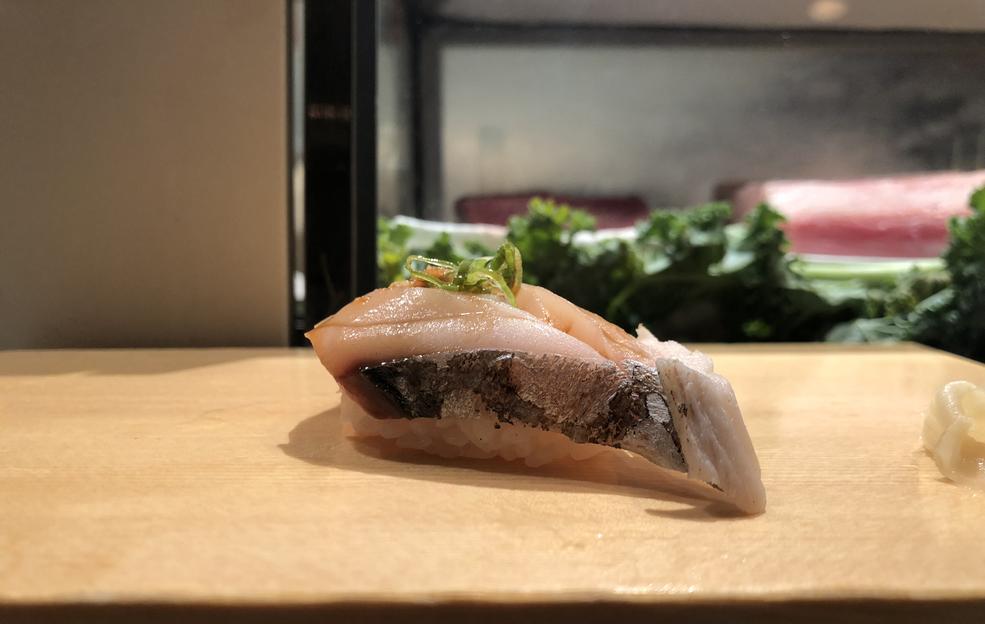 Over the past few weeks, I've spent a fair amount of waking moments - of which there are many, I can sleep when I'm dead - recommending Uogashi to anyone who will listen. The reason for my support, besides the wonderful sushi I spent 1,000 words detailing above, is just how friendly the entire operation is (for those that care about such things, all three Itamae behind the sushi counter are regularly converse with their customer).