The restaurant may appear simple from the outside, but Uotora is no simple sushiya. Food is meticulously prepared and delivered, despite the fact that the undermanned roster of employees would easily fit inside a minivan. Vibe, that four letter word of nebulousness, is essential to any good restaurant. Uotora ​balances the neighborhood chill with a modern, professional restaurant, to create an excellent vibe. Recommended. 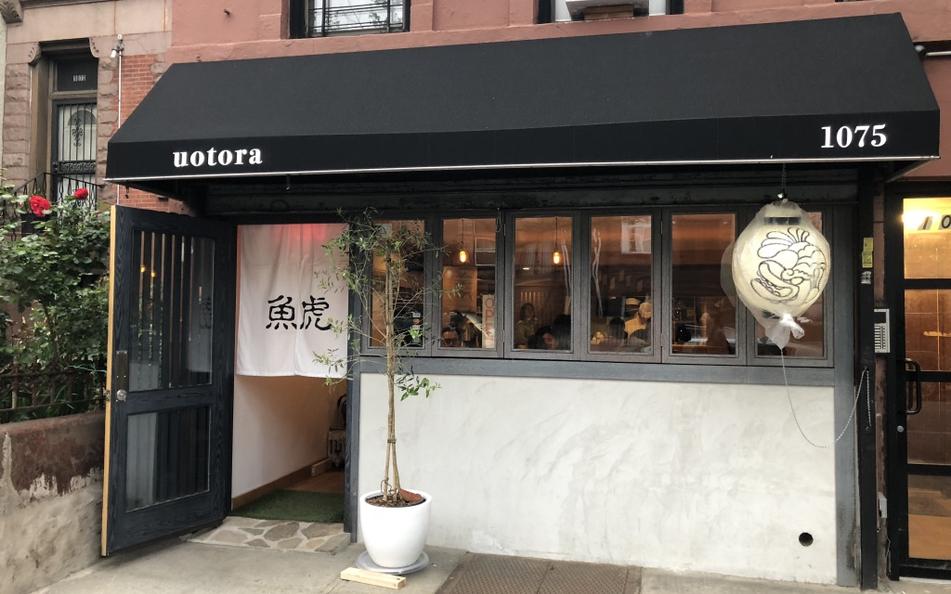 The counter at Uotora​ is omakase only, which is important information for those of you want to order yourselves (it's offered at the tables). Both chefs stand behind the counter in harmony, methodically preparing sushi for every customer. Incredibly, until the aforementioned and unexpected popularity surge, Kobayashi and Hotta prepared everything, including the cooked food, by themselves. Fortunately, they've since hired kitchen support to help with cooked beauties like cod, scallop and salmon.

Other highlights of the table-only, a-la-carte menu are the well-balanced ​negitoro (chopped medium tuna belly with scallions) and the ​Kanpyo, a simple but delicious vegetable maki. But frankly, the moment I saw the online menu , with a sushi omakase priced at a so-reasonable-I-knew-I-wasn't-in-Manhattan $70, my mind was made up: the wooden counter would be my destination. 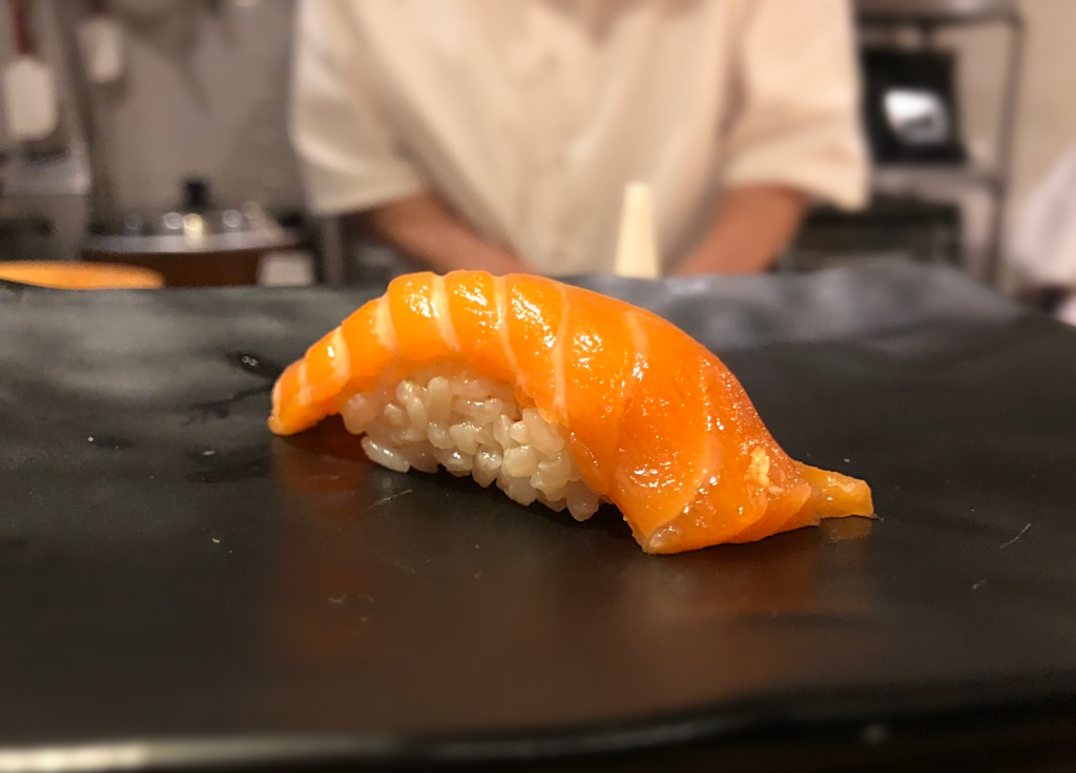 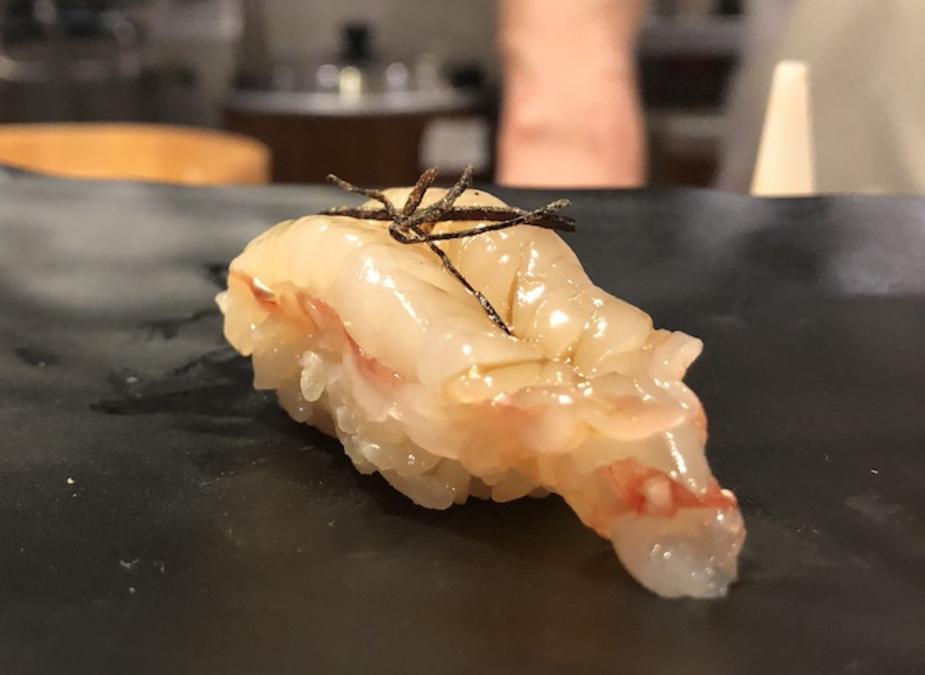 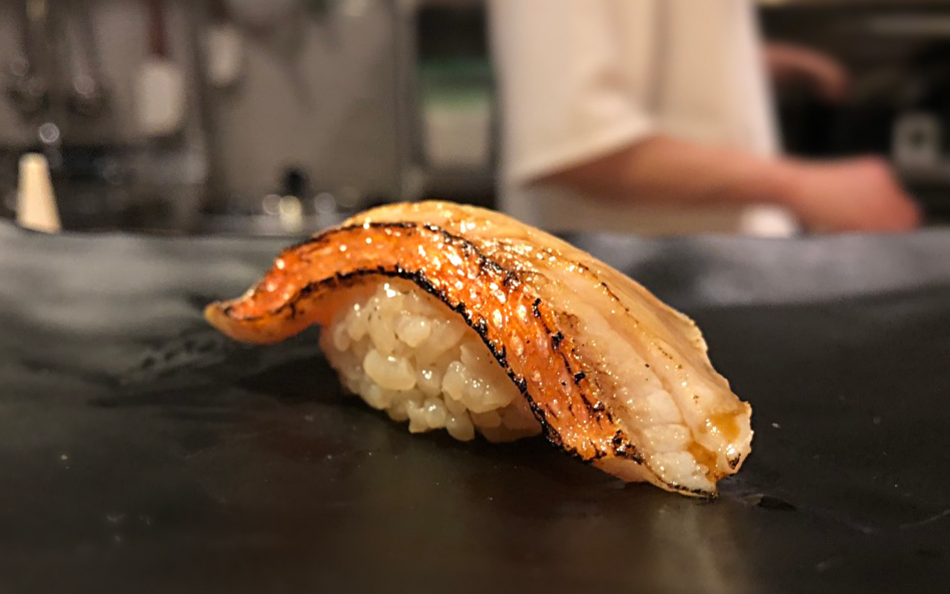 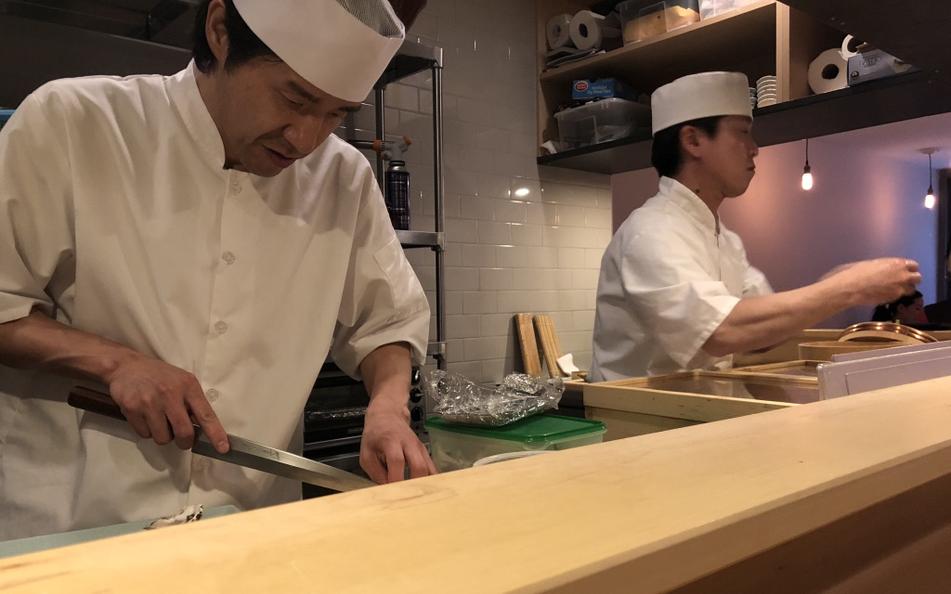 Y ou'd be forgiven for being surprised about Uotora's location.  A small nook in a subset of Crown Heights in Brooklyn, it resides in an area not exactly known as a culinary hotbed. Or it wasn't at least, until recently, when soaring rents in Manhattan, Williamsburg and Long Island City have pushed some of New York City's true tastemakers further (or farther?) outside the city's center.  This isn't the place for massive restaurant groups or celebrity chefs with venture capital funding. It's for people like Hiroyuki Kobayashi and Atsuomi Hotta, two experienced New York City sushi chefs, who've finally decided to push out on their own and open a sushiya in more reasonably priced real estate. Their decision benefitted me, since I'm sort of tired of tapping a line of credit to review omakase spots for this blog. 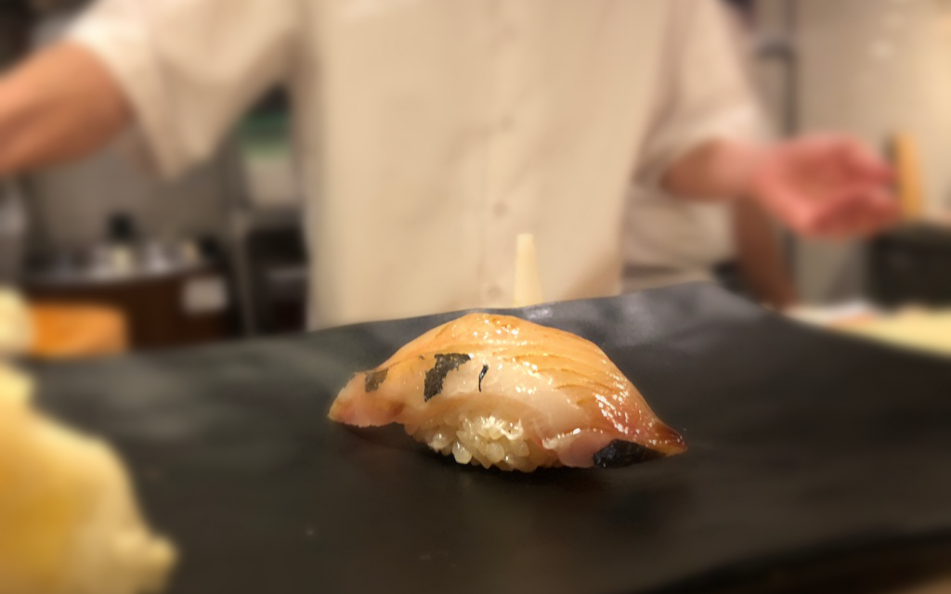 Eagle eyes might have noticed the slightly different look to the shari (rice in the nigiri). That reddish hue stems from Uotora's use of red vinegar, called Akazu, to season the rice. As Atsuomi-san will gleefully and correctly tell you, most ​sushi restaurants use rice vinegar, a cheaper and more available ingredient.  Rice is the lifeblood of good sushi, so you'll notice the taste of the Akazu immediately. It's worth trying if you haven't before, especially accompanied by the briny, lean, two day aged kohada (below). 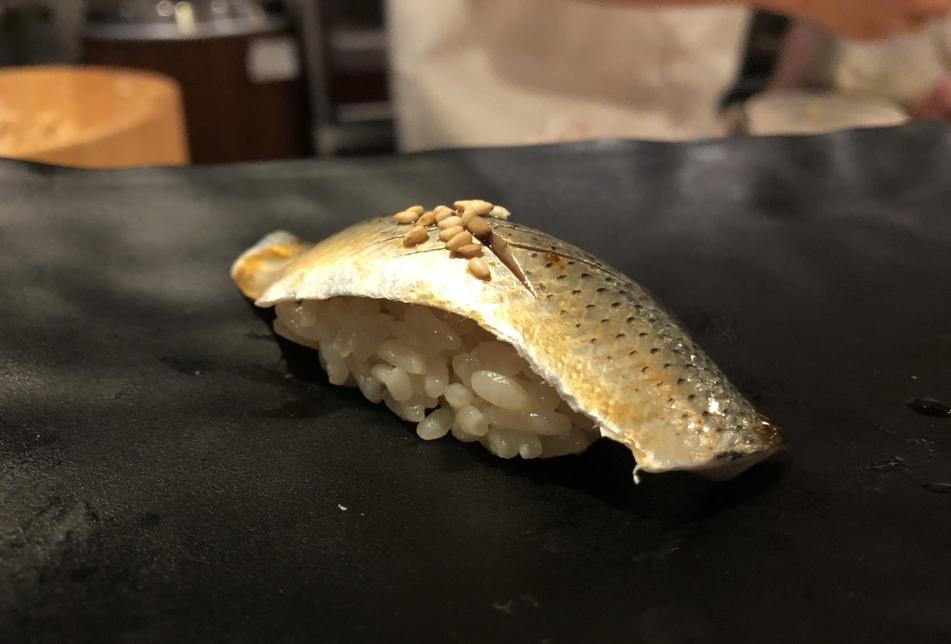 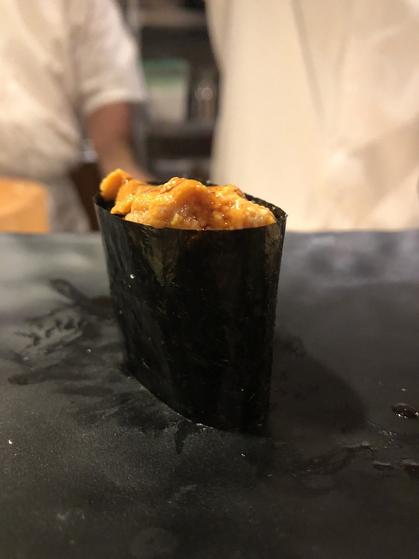 Entering Uotora, the first thing I notice is the coziness. Capacity is tight: there's room for about 20 in the main restaurant and 8 or so at the sushi counter itself. Atsuomi-san, who served me at the counter through the duration of the meal, explained that the size of Uotora was a natural check on what him and his partners felt would be muted initial interest. Well, turns out he was wrong: incredible initial reviews coupled with demand for great sushi in Crown Heights (slash the world) have meant throngs of customers, despite the fact that Uotora does not yet have a liquor license. That's a great problem to have but it means that if you're planning on going - and you should - a reservation is probably wise. 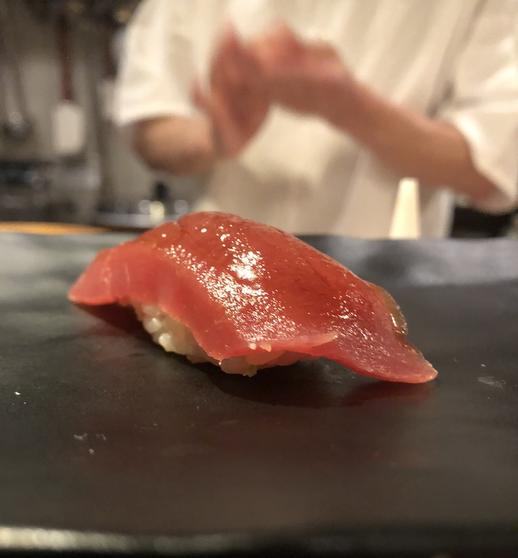 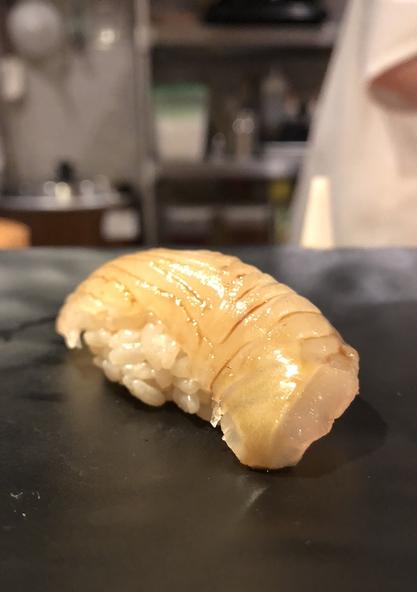 My personal favourite nigiri followed next. Hirame - usually referred to as flounder, though that can apparently mean over 600 species of fish - is a white fish with a beautiful pinkish hue running through the cut. Hirame is fattier in the summer months, and traditionally it was only served in the winter to maintain the lean, white fish flavour. Like most of his nigiri, Atsuomi-san layers the ​hirame with shoyu (soy sauce) to accentuate the flavors. It's pictured right. ​

The meal begins with three accompaniments (pictured above), including yakimono (grilled dishes): Bonito from California and Tilefish from North Carolina. The third bite, a kunomoto oyster, is simply dressed with shoyu and a touch of heat. These dishes serve to wet the palette without removing the overwhelming, palpable, addictive anticipation for good sushi (ok, maybe that's just me).

And - big Bill Simmons voice here - *ohhhhhhhhh* that sushi. 10 pieces of nigiri, efficiently made despite a full barrel of other customers for the two itamae to serve. We're started with red snapper followed by ​shima aji (striped jack), a ​tane (aka ​Neta aka rice adornment) that is particularly excellent in the summertime, since that's when it spawns. The glossy shine (pictured below) almost made me remorseful to eat it. ​Almost.

The less traditional but no just as delicious sake (ocean trout in this case) came next, followed by a Saba​ (mackerel) from Kyushu, one of Japan's large islands in the southwest. Kinmedai​ (goldeneye snapper), torched aburi​ and pictured below, is a tane that's appeared more frequently stateside. Given how delicious photogenic it is, you won't hear me complaining.

It won't be surprising to read that Uotora's interior is as comfortable and pretty as the sushi that they serve. Capacity is small, so for some, comfortable might stray into cozy. But the staff, some of whom Hotta and Kobayashi knew from their previous stops, are friendly, knowledgeable and patient, especially with customers who can't fathom that no liquor license includes BYOB isn't allowed or that not having a reservation may shockingly mean you won't get sat.